They say you should be very careful about meeting up with a person you have only known from some sort of internet relationship. You never know when they might be a serial killer, a Republican, or even a biker, God Forbid. My co-workers warned me about all the bad things that could happen. They say that bikers, especially those that ride machines without the modern day benefit of tachometers, are the worst. If that's the case, then you have to include me in the category of being "tachometerless". But after meeting a fellow tachometer challenged rider and blogger, I have discovered that not only do we not suffer from tachometer envy, but in fact we are totally normal, well adjusted individuals that are grounded in the knowledge that other people are secretly very jealous of our abilities to ride successfully without tachometers. At least that is what I think. Last Monday, Michael Beattie, his charming wife Layne and their famous dog, known as Cheyenne, came to Wichita and to our humble little home. I must further inform you that they had traveled in their Ford that day starting some place in Wyoming and driving through eastern Colorado and western Kansas (not known for beautiful scenery) on a 100 degree day. They were pretty tired from their effort that day, but that didn't stop them from meeting us at our home and bringing a bottle of wine from Oregon to share with us. We talked at length about almost everything under the sun. There was hardly ever any break in the conversation and I must say we hit it off very well. You would be hard pressed to find a more interesting couple. Michael has this sort of mischievous twinkle in his eye that I actually imagined he might have just from reading his blog. Layne is intelligent and quick witted, probably a requirement to keep up with the sometimes sarcastic and radical utterances from her husband. I say that in a good way. 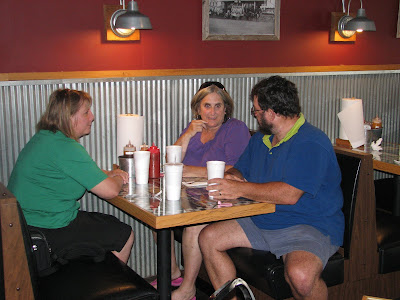 Layne here is obviously stunned by something uttered by Michael. My wife Jayna on the left looks on in some disbelief also.

It was even a little strange because even though I felt somewhat acquainted with Michael, through reading his blog, and probably vice versa, there were still many things I didn't know about him. So even though it felt like seeing an old friend, it was like meeting a new friend at the same time.

To our wives, it must have been even stranger, not knowing very much about the other couple except for that information which could possibly be extricated from the husband bloggers, which we all know is probably incomplete and untrustworthy. But there was never any unease and I have to say that Jayna and I had a very enjoyable time. Michael even wanted to see my scooter so I had the opportunity to show off Max. 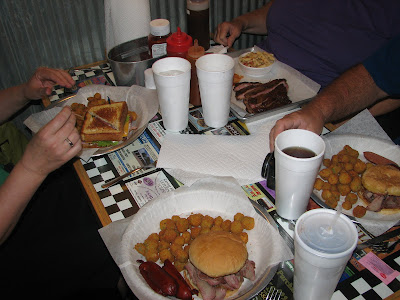 The delicacies for that day, just for Bobskoot. The breaded okra is a very welcome new item on the menu at this restaurant. You could also get fries or potato salad. But the meat is what is famous here. The owners display all sorts of ribbons earned at cooking contests throughout the midwest.

Michael and Layne eventually went back to their hotel to crash and we made tentative plans to get together for lunch the next day before they left on the next leg of their journey.

The next morning Jayna and I went to work. Michael and Layne probably slept in a bit and Michael said he wanted to work on the computer a bit. I suspect that he has a couple weeks of posts all scheduled up. Sort of disgusting, if you ask me. I am not near that organized nor as frequent a poster. Key West Diary is an amazing and fun blog to read. They came downtown to our office building and we took them to one of our favorite BBQ places for lunch. Michael didn't seem entirely sure as to what to order so he said: "I'll have whatever Jim has!" which was a brisket sandwich, hot link on the side with breaded okra. Layne had no indecision as to what to order and got some spare ribs. Jayna opted for the club sandwich. All of which was delicious. 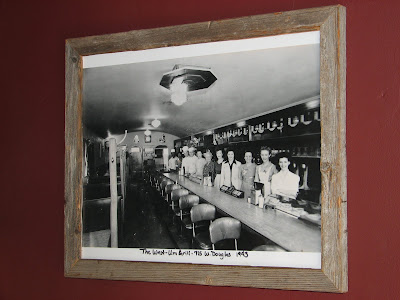 The restaurant we went to was west of the river in what is known as the "Delano" district. This part of town back in the cattle rush days of the 1870's and 1880's was known to be a little "wild" at times. Taverns and houses of ill repute were notorious as the cowboys needed a place to vent their frustrations. The east side of the river was where the financial and shopping districts took hold. The restaurant has a number of interesting old pictures of older times.

We talked and laughed some more. We told stories about our lives and how we ended up doing what we do for a living. We heard about the blogger meeting in Oregon near the BMW MOA rally and other tales of their trip. We made fun of other bloggers behind their backs (Jack and Bobskoot in particular, of course). I will not discuss on this blog what we said in order to protect those unable to defend themselves.

Eventually we were the only people left in the place. The waitresses had all of the other tables all cleaned off and stared menacingly at us as we continued to talk and laugh through the early afternoon. We didn't leave until close to 3:00. 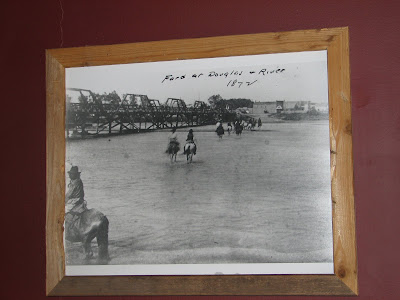 The Arkansas River from the west side a long time ago. Remember, we don't pronounce it "Arkansaw", here in Kansas.

I didn't even get many pictures partly because my batteries crapped out, but mostly because we were having such a good time talking.

They invited us to Key West. We said we would try, and we meant it.

Jayna and I feel very honored that they arranged their trip to come through Wichita.

Michael said he always wanted to see Kansas. I responded with "Bull$hit", but he may have really meant it.

Until we meet again!

And somehow I have a feeling we will!