Thoughts While Giving a Final Exam

I had suspended my teaching activities for awhile after I became a Cyborg. Just too many things going on. Had to let loose of a few of them. But this year I decided to try it again and as I am writing this, my students are taking an Auditing Final Exam.

They are working very diligently. (I am goofing off, blogging, dontcha know)

Recently it has been difficult to ride with much regularity. Work has been busy and I have been doing some speaking engagements that has required the use of the automobile to get around. Teaching has also complicated the issue.

But this is the last night for the class, and my speaking engagements are winding down. So hopefully back to riding some more. I missed a beautiful day for riding today. Cool this morning, temperature about 40, but sunny and 75 this afternoon. Damn!

My speaking engagements have been about changes in tax laws (many changes this year, very many). Sounds pretty boring, and it is, but the response from clients and others has been very strong. But, indirectly, the speaking has also been about politics, and there, I have to be a little careful. Clients run the gamut of liberal vs conservative. I try and walk the line and not offend anyone. All are entitled to their opinions, just so long as they don't get nasty with each other. After all, we are all Americans, Right?

In Kansas, we don't get to see all the television ads. The race is pretty well decided and has been for a long time. That's good, I suppose. But I sure wish some of the so-called statesmen at the federal level would get off their dead asses and figure a few things out rather than just bitch and argue with each other.

I was thinking about my generation earlier today. How we are leaving an incredible legacy of debt to our children, something our forefathers didn't do to us. It's embarrassing to me, and the politicians just seem to gloss over it and not do anything constructive about it.

Reminds me of a song by Sting

"You could say I've lost my faith in the politicians
They all seem like Game Show Hosts to me"
.
Ride On and Carpe Diem, my friends
.
Posted by cpa3485 at 6:51 PM 3 comments:

The early morning television weatherman said it was about 40 degrees at 6:30 am when I got up to feed the dogs.

The "Weatherbug" app on my iPhone said it was 42 degrees when I arrived at work (about 8:30am). Not unbearably cold at all, but probably the coldest ride in to downtown Wichita that I had experienced yet this Fall.

I wish I had gotten out the warmer gloves. No, dummy me, I still had the Aerostich Hot Weather Vegans in the top case. I know where my other gloves are, but just didn't take the time to dig them out. My summer gloves are mightily perforated and not worth a damn in cold weather, but, well you know, they are my favorite gloves, and....  Not to worry, fingers a little cool when I arrived downtown, but tolerable for a 15 minute ride.

I wish that I had grabbed my balaclava on the way out the door. Oh, it wasn't bad, but my neck got chilly on the way in. I had at least remembered to close up the vents on my helmet after the last time I had ridden. Gotta be proud of myself for that. I actually have a new (last year) balaclava that I haven't yet worn while riding. I'm not actually sure it will fit because my helmet fits pretty tightly. But it would definitely keep my neck warmer. I have another older balaclava that I have ridden with many times. It is nylon and fits fine in the helmet, but it's sort of an obnoxious blue/purple color. Just not the image I want to convey. Oh, the vanity of it all.

I didn't put the heavy liner in my pants, and I can't really say I wish I had. I was plenty warm in the leg department. If it had been a longer ride, I would have put the liner in.

I also didn't put the heavy liner in my denim jacket, nor, again, would I have wished that I had done so. Just didn't need it. Again, though, if it had been a longer ride......

I had my boots on. My laptop was bungeed to the seat in front of the topcase, but just behind my butt as I rode. Nothing on the "Man Bag Hook", but plan to stop by a couple of stores on the way home this evening for a few groceries. Will need the hook then.

I think Max likes running in cooler weather. He started and ran flawlessly, without a hitch, like he usually does.

Expecting the temperature to be in the upper 60's for the ride home. Ought to be a glorious experience.

I wish every day could be like today!
.
Ride on, and Carpe Diem, my friends,
.

A Much Needed Mental Health Ride

I had lunch with a friend yesterday who used to ride a lot, but doesn't anymore. He has a very fine old BMW  motorcycle (1970's vintage) just sitting in his garage gathering dust. I've coveted that bike a bit, but it would be a "project".

At any rate, he asked me if I had been riding much. He knew I hadn't ridden much for a year or so after my heart problems developed last year. I said I had been riding some, but not much, and not near as much as I would like to, but... 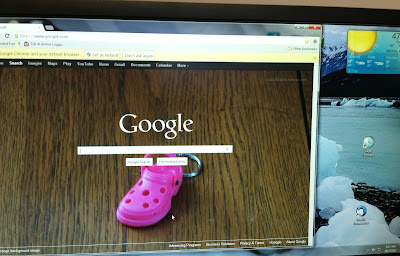 We've been really friggin' busy lately, both at work and at home. I hadn't even been commuting on Max to work very often. Last week the weather didn't cooperate on some days, but there were other days I just needed the car for one reason or another.

But the point is, I needed to ride. Bad! And today was the day. Ne need for the car. No big appointments with clients. Hell. I might even take the afternoon off! And go for a ride! No fixed destination! Just Ride! Go ahead and burn some gasoline!

I tell friends that riding is a form of mental therapy for me. It renews me. It makes me forget about problems. It is hugely meaningful to me. And when I don't get enough of it, well, things just sometimes don't go right. I get cranky! Bitchy! I throw things! I curse!

But when I turn the key and hear that engine come to life, well, you know, you get a little smile on your face, and you start thinking about more fun things. Things like just noticing the weather a little bit. 47 degrees this morning. Thought about switching to a heavier glove, but just thought about it and didn't pull the heavier ones out from storage. (Now just where did I put them?).

The vents were still open on my helmet. At 40 mph the breeze on portions of my chin and head were noticeably "cool". The denim jacket was plenty warm, no problem there. Feet and hands just fine. But I really like riding in this kind of temperature. It is just cool enough to be invigorating and keep you awake. But you don't sweat.

I just rode!
And I watched the traffic!
And I followed a dude on a Vespa for a mile or so!
And I pulled up to a stoplight next to another dude on a Harley (Did his motor have to be so friggin' loud),
And I had to make a rather quick stop at another light when it turned yellow on me rather abruptly,
And I had to keep an eye on what was behind me when I made that quick stop,
And I heard some birds,
And I noticed some kids on a school bus,
And I noticed the sunlight reflecting on some of the downtown buildings,
And I noticed a building being remodeled and wondered what the new purpose of the building was,

You get the drift!

And you know what else?