Chili and Sleeping at the Office.

Do you remember that comedian by the name of "Gallagher"? He was famous for smashing watermelons and other fruit and vegetables during his routines. Pretty funny guy. Haven't heard much about him lately, but assume he still might be around.
One thing I remember him talking about was "colors that only exist in yarn". He would go on about this for a few minutes and I would laugh my ass off.

Well, this weekend we rented a pickup truck that reminded me of Gallagher and his comments about colors. 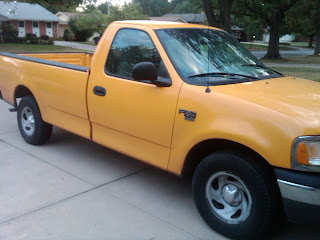 How about mustard yellow for an F-150!! Pretty Cool Huh?


Well you might ask why we rented this baby and the reason is so I can take naps at the office. Let me explain.

With my heart condition, I have discovered the value of a nap in the afternoon, even if it is just for 15 to 30 minutes. So we moved a couch up to the office so I might be able to take a nap if I need one. And on some days I really need one. 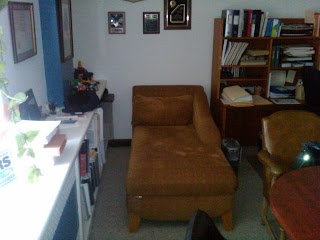 After we moved the couch we decided to take in some of the Chili being offered up at the local "Chili Cook Off". As we walked down a few blocks to the area of downtown blocked off for the event we ran across this sign for a local theatre group for a play they were putting on. 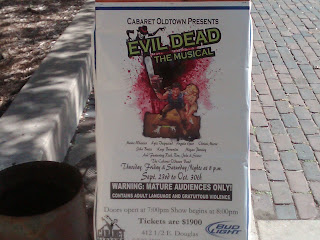 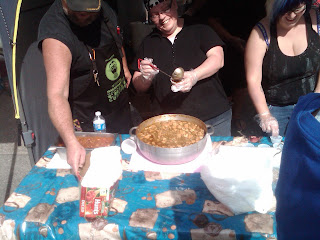 When you arrive at the chili feast you pay $5.00 and get a wristband. Then you sample each vendor's chili and later vote for your favorite with a bean that you place in their jar at their table. Each vendor has a booth and table along with litle cups and a spoon. 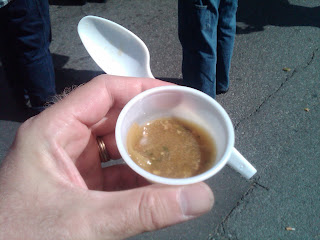 The first chili we tried looked like this. It was a vegetarian chili that just seems to defy all the logic of what chili should be. But my daughter and I actually liked this one very much. It had very good flavor despite the lack of animal proteins. Not too bad for our first taste. 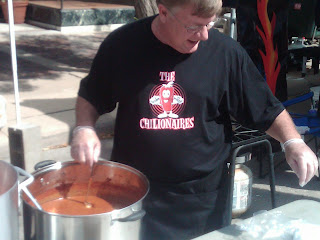 A lot of the vendors identify themselves with a funny team name like this one, the "Chilionaires". 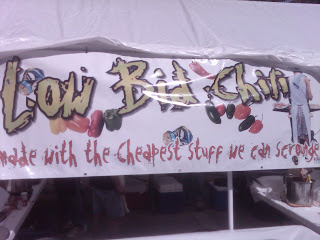 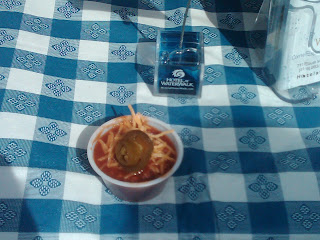 At one of the booths, you could decorate your chili with cheese and some jalapeno peppers, which I did, and I enjoyed this one very much. 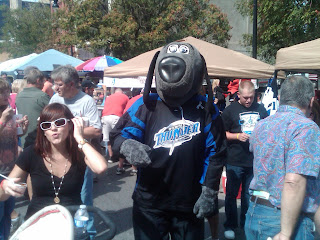 Wichita even has a hockey team, yes you heard me right, hockey, and the team mascot was here to help promote their booth. Go Thunder Dog! 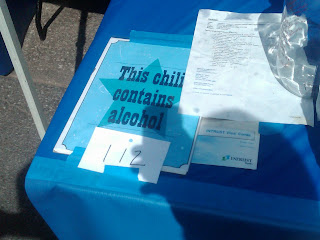 At one booth there was a warning about the contents of their chili. Oddly enough, this chili was sponsored by a local bank. (One that didn't need a bailout) 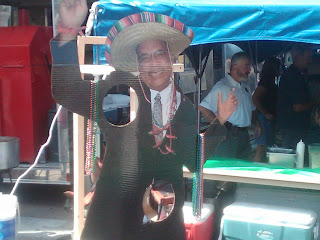 Even the mayor of the city was here, well at least a cardboard cut out of him was. Apparently you could throw beanbags through him and win a prize. 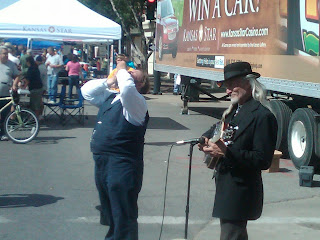 There was a little sideshow from the players at Old Cowtown as well. Here a banjo player was accompanying a guy trying to swallow some sort of a balloon.

Apparently this group later in the day tried to beat a Guinness World Record for fire eating by enlisting a lot of audience participitation. They weren't successful. But, Hey, You only live once. 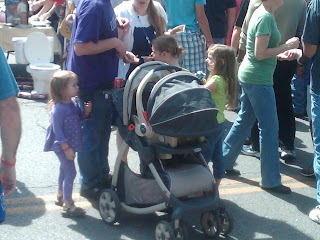 The only evil thing going on this lovely afternoon was a preponderance of "strollers". Yes, "Strollers". More evil than V-Stroms. More feared than K-Bikes. Inviting more dread than Bonnevilles. Some of these devices are huge, encapsulating entire city blocks and carrying more children than the ball roomplayhouse at McDonalds.

And this one didn't even have a child in it. They all walked along the side with Mumsy and Daddy, all carrying their little chili cups and spoons. Oh, the humanuity of it all. 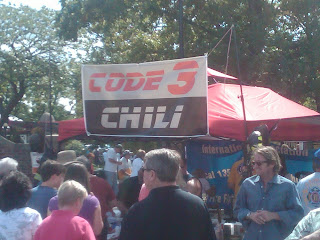 Here's the booth for our favorite, "Code 3 Chili". This booth was offered up by a local firefighter's union and their chili was delicious. 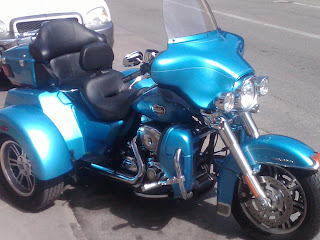 After growing a bit tired of fighting the crowd, we went our way back to our mustard pickup. You know, the one with the color that only exists in yarn. But on the way, we spied this Harley trike parked along the street. It was only barely bigger than some of the strollers we saw that day. 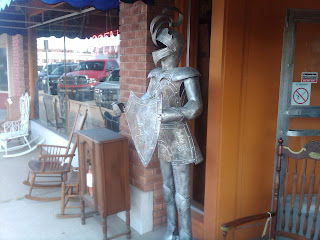 As we walked along we went by an antique store and had to stop and peruse the goodies. Out front was some early ATGATT merchandise for sale. Still looked usable. 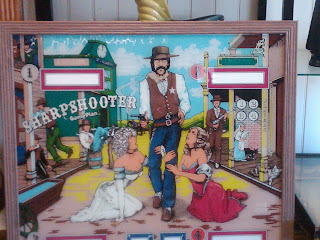 And inside I found this picture that looked like it may have been off of an old pinball machine. The guy remionded me of many of my fellow bloggers. You know, those that have this kind of swagger and that always have women hanging off them.