Taking Out The Liners & A Very Strange Cow

The weatherman said that the temperature at 7:00 am was 61 degrees
the dew point was 60 degrees
the relative humidity was 97%
He said if there wasn't a 15 mph breeze from the south, It'd be Foggy As Hell!

There was no way I was leaving the liners in my gear. My pants have a fleece and a waterproof liner. Out they came.

My jacket has just a fleece liner (a waterproof liner in a denim jacket is nonsense)., But out it came, too. 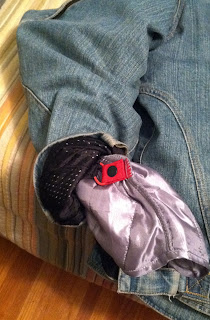 The next step was to change gloves. The old Aerostich Summer Vegan (my favorites) were patiently hanging in the garage for over a year. I didn't put the winter gloves away just yet. Might still need them.

80 degrees in March! Are you kidding me? 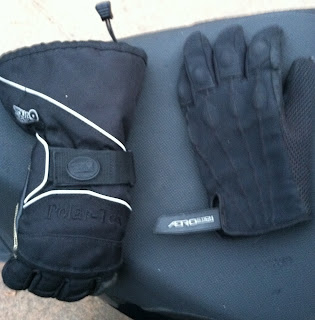 On the way to work today, I had a mission to stop by the Grand Opening of the new "Chick fil A" not too far from my house. Yes, we didn't have one in Wichita. We have lead a deprived life. The restaurant opened up at 6:00 am today and people had camped out since yesterday to be one of the first 100 customers. Seems that the first hundred would get a free sandwich every day for a year, or something like that.

I was not one of the campers. But I did stop by to get a couple of pics.

At this one in the parking lot, if you make the proper left turn you can enter the "two lane drive thru".

Ahh,, what they won't think of next. 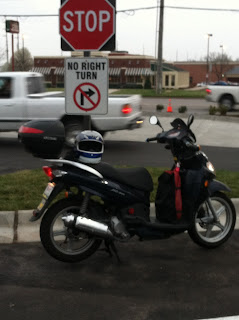 And, of course there was a radio station with their DJ blasting music and this guy.... 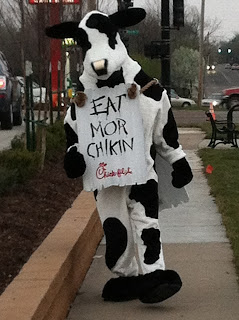 I regret that I didn't stop and buy anything. Guess I don't get too excited about new restaurants, especially fast food ones. Although, from what I hear, their food is pretty good. I am unable to judge it, though, having never tried it. Maybe someday.
Posted by cpa3485 at 9:45 AM 4 comments:

At the beginning of Tolkien's "Lord of the Rings" is a scene where Gandalf arrives at the Shire and is greeted by Frodo who says "You're Late!"

To which Gandalf calmly replies "I am not late, a wizard arrives precisely when he means to!"

I was thinking about this scene in the movie as I rode to work this morning. It will be a beautiful day and I was having a lovely time riding.

However, some drivers seemed, as usual, to be more in a hurry than really necessary in my opinion. Oh, nobody was really being careless or driving dangerously, but, compared to me, they were more intent on getting to where they needed to go than I was.

You see, I like to take my time a bit. If I fancy something on a side street, I just might turn and take a look. If I take a small detour, I will still arrive at work in time. There will be plenty of time to "Git R Done". 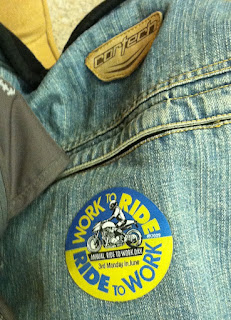 I just wish other drivers would sometimes just "Take A Chill Pill"!
Posted by cpa3485 at 8:38 AM 3 comments: