Some mornings I arrive at the bus stop a little early. There is a bench to sit on and frequently I will sit and look at emails or the web on my blackberry. It is a busy intersection and I also watch traffic and take special note of motorcycles and scooters as they go by. Some of them I see frequently as they are obviously serious and regular commuters. Many times I only catch a short glimpse. Other times a bike will stop at the light and I can get a longer look.

Going east in the morning is a guy on a Suzuki. I am not always good at recognizing the models and this bike appears to be a little older. It is a dark green 2 cylinder, maybe 650-750cc. It is fairly plain looking without a lot of plastic body panels. There is no luggage or cases on this bike and the rider usually wears a backpack. It is certainly not a screamer, but appears to be a very adequate machine for commuting and other purposes. I really like the bike for its simplicity and were I ever to move up to a larger machine myself, this Suzuki would be a bike I would be very interested in.

Going north in the morning is a bike that I have never seen standing still. It is a black bike, not sure of the make or model, and the rider always wears black gear and a black helmet, looking just a bit ominous. It is a little bigger and newer than the Suzuki. The motor sounds real nice, not obnoxiously loud, but very strong. I wish I could get a better look at it.

Another morning as I walked to the bus stop, I noticed a black Honda Silverwing scooter parked in a lot near the sidewalk. I stopped to look at it for a moment. This is a 600cc Maxi scooter and is a nice looking machine. It is also one I might be interested in if I were looking to upgrade to a bigger machine. As I stood there, the rider appeared from a bank ATM machine nearby. He immediately struck up a conversation, telling me all about the bike, who he bought it from, how long he had it, what kinds of trips he had taken with it, etc. I hardly got in a word into the conversation. He was very proud and bragged about it in comparing it to a friends' Harley. His enthusiasm surprised me and in our brief conversation, I never bothered to tell him I also had a scooter. Not sure he would have listened, anyway.
I see some scooters also and some big cruisers sometimes. Some riders wear all the gear, some hardly any at all. As I look at bikes, sometimes I wonder what it would be like to own one. There are some bikes that do not interest me at all. I really don't like bikes with loud pipes. I am not interested in real big machines either. I think 600-800 cc is plenty. I am also not impressed with really small scooters, not enough power.

I guess there are some kinds of bikes I really do not see the point in. How about real high handlebars, for instance. Trying to air out the armpits? Huh? Lots of chrome doesn't really impress me either. I would rather the bike be extremely dependable rather than "pretty". But that's just me. Saw a Goldwing the other day pulling a trailer. I have nothing against Goldwings, but they are immense, and just not my style.

But who am I to judge? After all, I ride a scooter. And don't get me wrong. I love my scooter. But I know it also is not for everyone.

The bus I ride passes by a Triumph and Victory dealer on the way downtown. I really like looking at the Triumphs, the Victory's, not so much. The dealer really seems to push the Victory's for some reason. To me they appear to be big and heavy and inefficient. I like the Triumphs much more. They are also on my potential upgrade short list.

I saw a couple of unusual riders recently. One was a guy dressed in military camouflage and rode south toward the air base a few miles south. I assumed he is stationed at the base. I didn't get a long look at the rider, but as I watched, I thought a bike would be a great way for a single military man to get around. Hard to see though (just kidding).

But then, just a couple of days ago, I heard a motorcycle approach the bus stop. I looked up and in the distance I could see a bike with a sidecar approaching. It even sounded old, a very distinct noise. As it got closer I could make out the distinct jugs of a BMW airhead. It almost sort of creaked up to the stoplight, the age of the bike very apparent, maybe 50 to 60 years old. But the engine wasn't missing a beat. What a sight! I was sad that my view of the bike was partially obscured by surrounding automobiles. But a smile did come to my face. Don't see one of those every day.

If all goes well, I may get to ride again in about 45 days.

I'll Have To Miss It This Year But You Shouldn"t

Here's one of the reasons I ride to work as much as I can.
(and , no, my tag isn't expired, it's just an old picture) 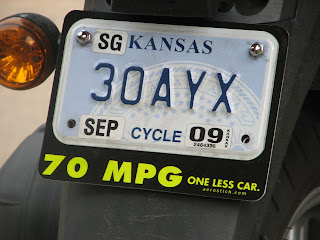 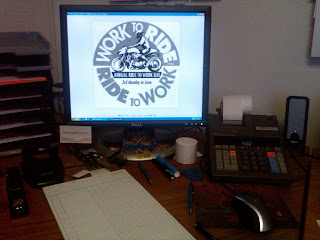 Another old picture that for some reason I have always liked. The road is finished now and I would get run over if I tried to take this picture again. 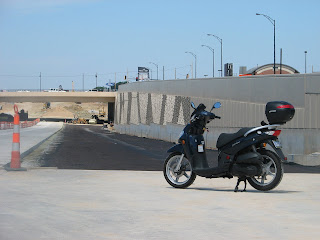 Have a Great Ride to Work Day!