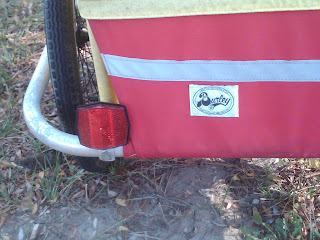 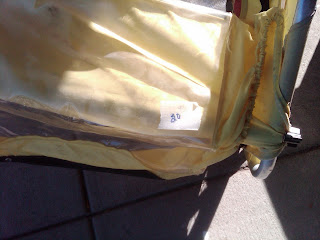 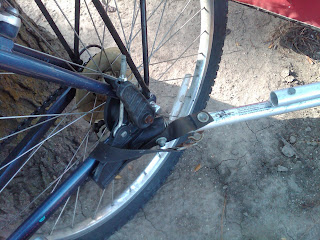 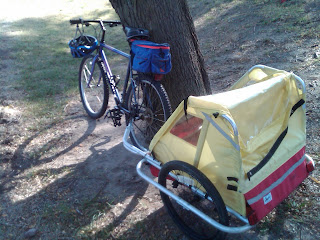 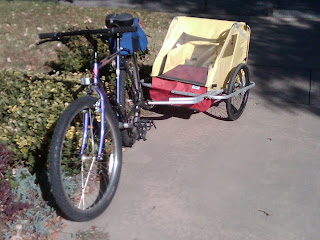 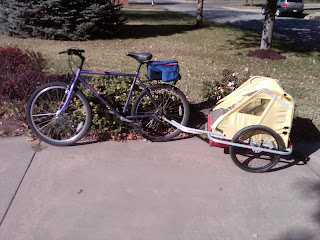 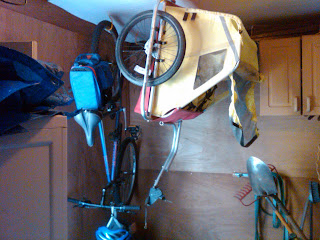 What a find! What a lot of great memories! Perhaps a future grandchild will ride in this trailer. Certainly groceries are an occasional possibility. Perhaps I will revive my interest in garage sale-ing and take the trailer to hold my new "stuff".
Posted by cpa3485 at 10:33 AM 5 comments:

Every Couple of Weeks

It is amazing how much brighter your lights can be if only you would clean off the bugs from your headlight lens. I stood back to admire my work after applying a little glass cleaner (even though the lens was plastic). A few of those bugs had been on there for a long time.


I was thinking that I sure have missed out on a lot of riding this year and this is my favorite time of year to ride. Temperatures ranging from the 50's to the 70's are what I like. A ride to work when the temperature is about 50 degrees is a good way to wake up and feel alive for the day ahead. Just cool enough to be a bit chilly. Not too cold on the fingers.

Max stood in the driveway gently idling away as I cleaned up the light. We had just ridden around the neighborhood to get his battery charged up a bit (mine too) and to make sure he was operating okay. He started right up, like he usually does. The idle sounded good, steady and even. A touch to the throttle and he responded instantly.

Two weeks ago on a Saturday, I had the same plan. Get Max started and ride around the neighborhood a bit. But it had been about 4 months since I had even tried to start Max. I know, bad idea to wait that long, and as could be expected, the battery was pretty dead. I pulled the battery, attached it to the trickle charger and let it go overnight. Started up fine the next morning. From then on I vowed to start Max at least every other weekend and this past weekend was one of those.

I added a little air to the tires and did some thinking about upcoming maintenance needs. Max has 8,111 miles and will be due for a valve adjustment, new spark plug, cooling system flush and new air filter at 9,000 miles. I am thinking springtime will be perfect for that. With a little help, I have performed those tasks before and am pretty confident I can tackle them by myself next time. I will probably do an oil change before I start riding again, hopefully in February.

Cleaning off the headlight lens reminded me that my helmet visor is pretty dirty as well. I would have cleaned it up as well, but the helmet was locked up in my top case while Max was idling and the key to the top case was on the key ring in the ignition switch. Oh well, that will give me something extra to do two weeks from now.