In the never ending quest for the strange and unusual.....
On a recent Saturday I needed to meet a client for a short meeting that could not be arranged during the week. It was a perfect day to take the scoot rather than the car. I had a plan to get a few pictures of a couple of things that I had been meaning to get a picture of for awhile, but never seemed to get around to.
On my regular route to work, I sometimes (frequently) cut through the parking lot of a small shopping center/office complex. I do it to avoid a major intersection near my home. Really no particular beneficial reason that I do this, I just do.
About a year and a half ago I spotted this Ford Aerostar van in a parking space. It has always been there. Not only that, but it appears that the right side tires and wheels of the van appear to be literally "stuck" in the soft asphalt of the parking lot. Who knows how long it has been there before I even saw it.
As I went by recently, I noticed that the "list" (to the port) of the vehicle had changed from what I remembered. It seemed to be at more of an angle than it used to be. 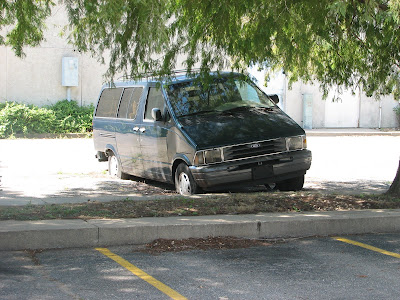 The Aerostar van "listing to port" in the morning sun.

I rode over closer to investigate and get a few pics. 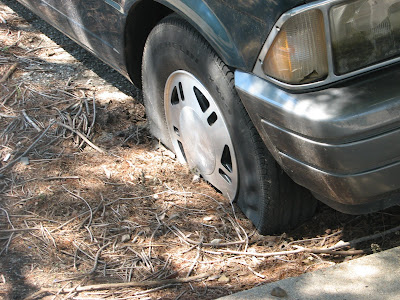 The right front wheel buried in the asphalt. The parking lot is just asphalt with no concrete underneath, and probably not well constructed. On a really hot day I can imagine the asphalt being real soft and a vehicle parked for a long period of time just might sink into it. 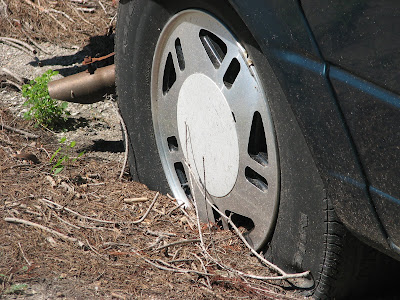 The right rear looks no better, in fact maybe lodged a bit deeper.

The right wheels look like they were about the same as I remembered them, so I went around to the other side of the van to see why it was leaning more than it used to. I discovered that this jack had been placed under the left front part of the van. Was someone actually trying to get it unstuck? And if so, what was the logic here? 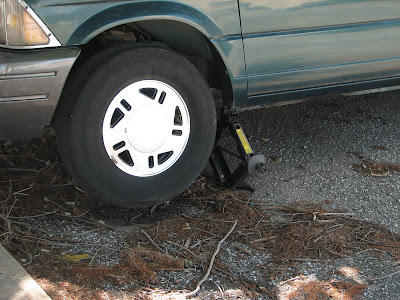 The left front wheel is off the ground. What this is supposed to accomplish beats the heck out of me.

I take a look at the left rear and notice some damage to the body. Perhaps the owner of this vehicle first attempted to use the jack here. Apparently only succeeding with furthering the predicament. 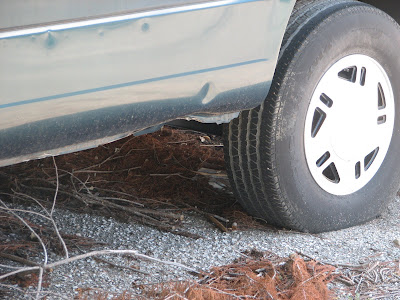 Okay, I know this is too wierd. I assume the van won't start. If it did, don't you think it would be possible to just try and drive it out of the holes? WWYD (What Would You Do?)
Posted by cpa3485 at 10:00 PM