"Here's to the crazy ones.

The misfits.
The rebels.
The trouble-makers.
The round heads in the square holes.
The ones who see things differently.
They're not fond of rules, and they have no respect for the status-quo.
You can quote them, disagree with them, glorify, or vilify them.
But the only thing you can't do is ignore them.
Because they change things.
They push the human race forward. And while some may see them as the crazy ones, we see genius.
Because the people who are crazy enough to think they can change the world, are the ones who do. "

Going Back in Time

What if you had a chance to go back in time?
Ignore the practical impossibility and just assume it could happen.
What would you do?
Where would you go?
Would you like to go back and see some spectacular sporting event? Maybe the Boston Celtics back in the 1960's in game 7 of the NBA finals. Or Babe Ruth hitting some infamous home run.
Maybe you'd like another chance at catching that pass you dropped in the end zone in high school. Or that layup you missed in the 7th grade.
Would you want to go back and see a loved one that is presently deceased? Lots of interesting possibilities there.
Would you want to go see an old girl friend? Or boy friend? Ignite some old passion?
Would you just like to visit an interesting or fascinating period in time? Sort of like a tourist. See how the Egyptians actually built those pyramids? Maybe even visit Jerusalem in the time of Christ? Mayans? Aztecs? Nazis? Hmmmm.
How about going back in time to right a wrong? Could you prevent the murder of JFK or Martin Luther King? Maybe something without that kind of impact. Maybe a littler thing. There was that girl I said some very mean things to when I was about 15 yrs old. I was mad at her for something, but I didn't have the facts straight. I think she has probably despised me ever since. Can't blame her. I was a total jerk and should have apologized, but never did. Could I undo what I did?
Would you like to go back and try to prevent something from happening? I thought about the motorcycle accident I had a few years ago. It wasn't my fault, not nearly so, but in retrospect, had I  been riding in just a little bit different manner, the accident might have been avoided. I was sort of in a blind spot in the road. Ever since then, in similar situations, I try and make myself a little more visible on the roadway.
All of this thinking is the result of watching a sort of quirky little movie called "Safety Not Guaranteed". It's on Netflix in the critically acclaimed section. A fun and entertaining movie. The movie wasn't so much about going back in time, as it was about the dream of the possibility of going back in time.
What would you do? Where would you go?
Ride on and Carpe Diem my friends!
Posted by cpa3485 at 9:43 PM 4 comments:

Out of the Mouths of Cartoon Characters

Buzz Lightyear has it figured out! 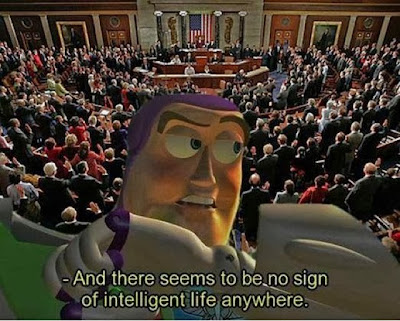