Just a few recent random thoughts on another afternoon on the back porch. I worked for about 4 hours again today. It's a sunny day with the temps in the 60's. Wish I could be riding.

..... I haven't been posting much lately just because I haven't ridden recently. Max is sitting in the garage with the cover on as he has for nearly 2 months now. This is by far the longest length of time that he hasn't ventured from the confines of the garage. The doctors are mostly to blame now. The excuse might have been weather for part of that time, but the doctors have been stubborn and said that I will need to pass a stress test on my heart before they let me drive or ride again.

That appointment is 2 weeks away, so I am counting the days. It's hard to be patient. But then again the doctors are probably right about being cautious. After all, I did have 3 little heart attacks, in a two week period, about 6 weeks ago. 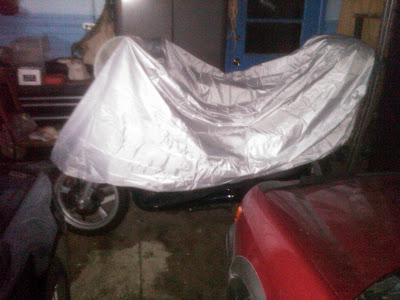 Speaking of medical bills.... Some have come in, particularly the hospital. After all these years of writing a sizable insurance check every month and not having hardly any claims, I must admit that the situation has reversed itself with a vengeance. It is absolutely amazing what 8 or 9 days in a hospital can set you back. Luckily the insurance will take care of the bulk of it. I hate to imagine not having the insurance and I am very thankful that I can afford it. There's little doubt I would be dead and or bankrupt without it.

I got a great little present in the mail yesterday. Some relatives thought that because I was sort of a bionic man now, with that implant in my chest, and because they thought I was probably tired of trying to watch daytime TV as I try and recuperate (which I definitely am), that they thought I needed a genuine Ironman comic book to read instead. Too funny! Thanks Bobbie and AD! 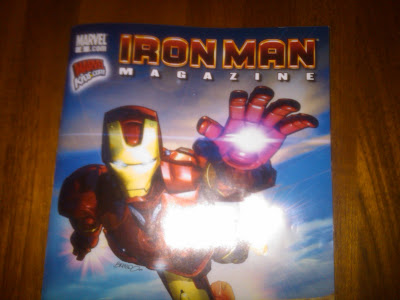 I got an update for the operating system for my Blackberry cell phone last weekend. I carefully went through the process of doing the upgrade which involved a backup of the "stuff" currently on the phone such as web page favorites, my calendar and contacts. During the update process, somewhere between the computer and the phone, something "burped", and the process was interrupted. The end result was that my operating system was upgraded properly, but my contacts and other "stuff" were completely lost.

Well Frack Me! (As they say in Battlestar Galactica). Aren't Blackberry's from Canada? Should I declare war? OK, I admit to not regularly backing it up, but Damn!

..... Cathy, the amazing and capable accountant, that along with my wife is keeping our little CPA office functioning while I am off enjoying my back porch half a day every day, received the following error message on her computer recently:

"Unable to Initialize the Calculation Engine" 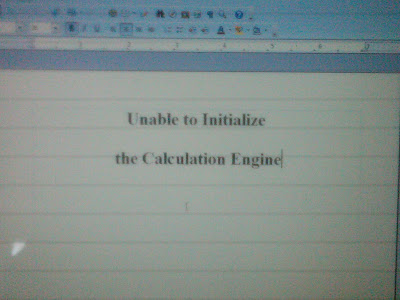 Whose engine are we talking about here? Does the engine need a tune up? Low on Oil? Bad gas? Of course there is no indication of what exactly the problem was or how to fix it. A brief call for technical support revealed that the tax tables needed to be updated, a process that consumed about 10 seconds. Who really dreams up this sh#* !

..... And finally, I thought the pictures of the earthquake in New Zealand were horrendous. Then we see what has recently happened in Japan with another quake and related tsunami. Makes me feel small. Makes me feel lucky, even with my recent health problems, to be alive and relatively comfortable on my back porch, with a cat in my lap, typing this little message to friends out there in cyberspace.

Maybe it's all a matter of perspective. My thoughts and prayers are going out to those whose lives are so affected.