In Need Of Gas

A look at the gasoline gauge on Max a few weeks ago indicated a problem. 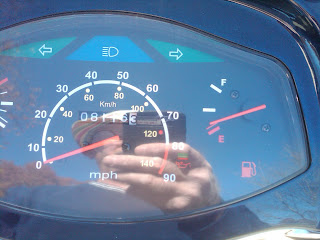 As many of you know, I have not been able to ride lately, for the last almost eleven months actually.

The gear jackets and pants sit forlornly in a closet. 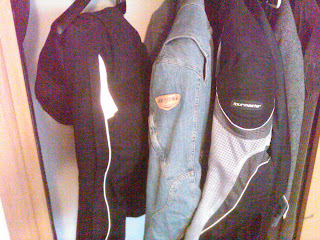 Max has patiently waited in the garage. I have been getting him out every 2-3 weeks or so. Starting him up and riding around the neighborhood a bit. It had been 3 weeks since the last escapade.

I have been cheating on the driving restriction a bit lately. About once a week I have gone to pick up a carry out dinner. But that's about it. 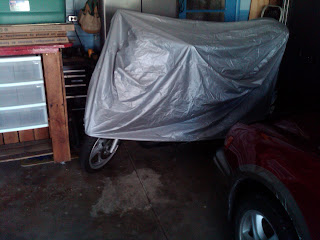 We have a winter storm approaching and my wife and I have a rule that we should always have our vehicles filled up with fuel, just in case we get stranded somewhere in a raging blizzard.

And I thought, very wisely I think, that we should fill Max up too. Because you never know when you might be out riding your scooter and get caught in a blinding snowstorm. Wouldn't that be awful?

I even checked the tires. A few pounds needed in both tires. 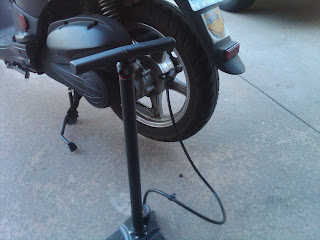 I laid out the helmet and gloves on the seat. They had been in the top case since January. I was afraid that I would forget how to do the buckle on the helmet. Wasn't a problem. Got the heavier gloves out , but decided that I didn't need the red fleece liners. It was about 50 degrees (something like 14 celsius), an absolutely beautiful day. 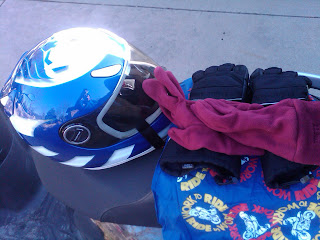 I paused to take a reflection picture in the window of the famous Canadian Subaru before I left. The tree in the background is filled with about 400 lights and is quite a scene at night. 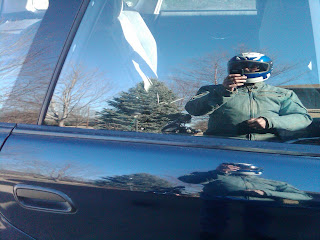 It is fairly busy at the gas station. Everybody preparing for the winter storm to come? I didn't forget how to use the pump on Max either. 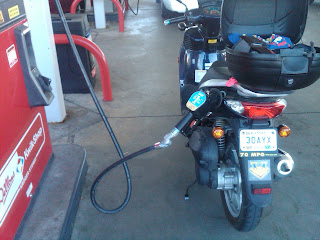 A whopper of a total there on the pump. The tank supposedly holds 1.9 gals. Hell, I could have gone at least another 20 miles or so. 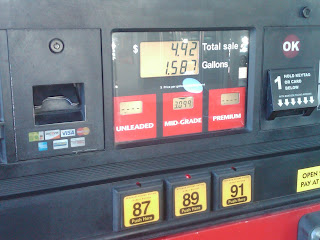 Once finished, I take off for the local Eddie Bauer store. I had an email that said everything was 40% off. When I got there, I discovered that everything had been marked up 35% the day before.

Oh well, Santa has elves, I have Target!   (supposedly) 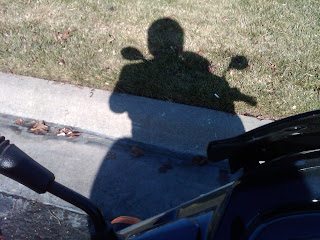 For some reason I like shadow and reflection pictures. Above is at the shopping center, below in my driveway back home.

A short ride, but hard to describe how good it felt. 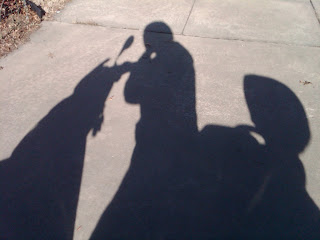 I go see the cardiologist on the 11th of January. Fingers are crossed.

Sincerely hope everybody has a wonderful holiday season.﻿