The two white scotties are a frequent sight for me on the way to the bus in the morning. Today, though, we are joined by another equally delightful critter. I've seen him before, too, just not as often. Today's doggy convention was a surprise and fun for a brief moment. The owners and I  talked about the rain we got last night, a grand total of 3/100 of an inch. (Who measures that stuff?) (3/100, really?) 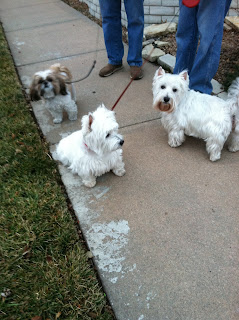 It was about 38 degrees (low single digits in celsius) and cloudy. But altogether not a bad day for a walk. My goal was Hillside and Central, 2 1/2 miles from home. There I would catch the bus. It will take about 50 minutes for the walk.

There are some fast food eateries on the way, starting off with the ubiquitous Sonic Drive Inn. I didn't take a picture of the McDonalds just up the road. You've seen one, you've seen 'em all. There's a Papa John's pizza place and a Dairy Queen along here. 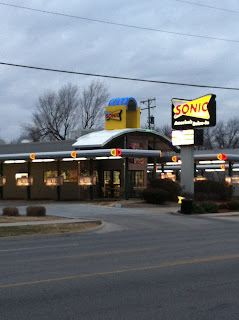 The next pic, sorry for quality, takes a little explanation. Imagine a restaurant, actually a "speakeasy" in the 1920's with a little tower on top. As you look at the next pic, imagine that you are in the little tower of the "speakeasy" and watching out for the authorities. As you look west down Central Ave, you can see for about a mile or so. There actually was a little establishment right along here, torn down about 15 years ago with just that little tower of which I speak. The story goes that they would keep someone in that little tower and watch for the police coming down the street. If the police showed up, then they would have time to hide the "hooch" and act normal.  Right here, in little old Wichita KS. 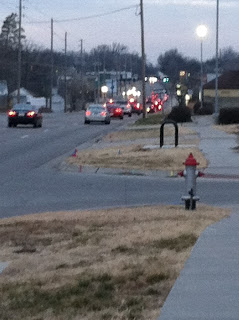 After crossing Oliver street, we come up on this little chinese restaurant that was converted from an old gas station. The Sesame Chicken here is to die for. I kid you not! The lady that runs the place doesn't speak the best English. She doesn't even ask for my name anymore because she knows my voice and that I almost always order the same thing. Jayna and I share one order of Sesame Chicken and eggroll. We can't eat any more than that. It's always "ready in about 15 minutes". 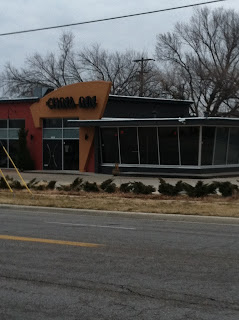 Then we get a little closer to the College Hill area, with some more exclusive homes. This street even gets it's own gate. 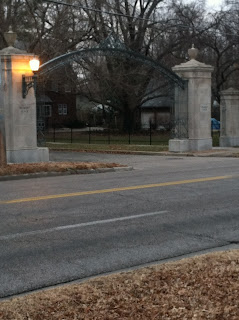 And near there, is something I've always wanted. A car with the owner's face painted on the side. Believe it or not, I actually know this guy and he does a little insurance for us at the office. He's okay, but I am sure nobody would want to see my face on a car. On a scooter?, Maybe! 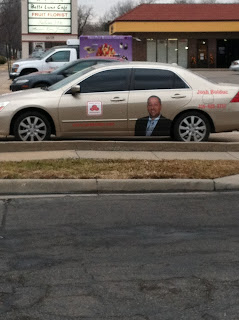 Now, since we are in the College Hill area, I wanted to give the gentle reader an impression of just how immense this hill is. Be careful as you look down hill so you don't become disoriented. What is known as College Hill is actually more of just a ridge with total change in elevation of about 125 feet. 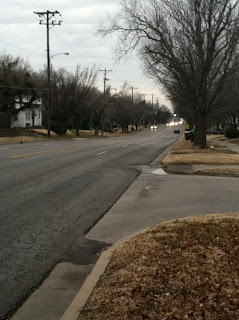 Toward the bottom of the hill we reach another restaurant that I like. 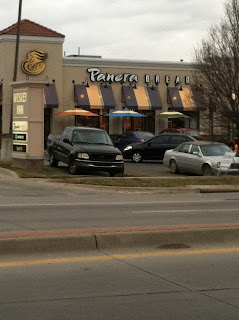 It's a busy restaurant because it sits just across the street from a place that I visited for a few days almost exactly a year ago (twice). The hospital marks the end of my walking journey today, 2 1/2 miles from home and almost halfway to the office. 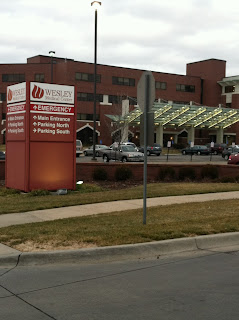 And finally the bus gets there and I ride the remainder of the way to the office. 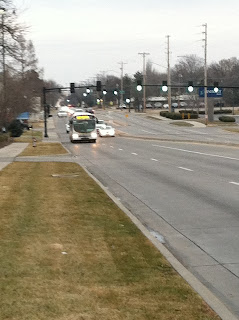 Hope you are having a great day!