I was 7 or 8 years old, in the 1960's, when the 4 minute mile barrier for running a mile was first broken by a high school student. That person was Jim Ryun and he did it while attending school at Wichita East High School, where my son is now a coach. 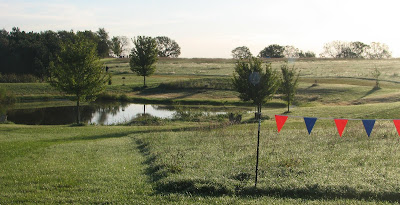 Dew on the grass in the early morning sun at Rim Rock Farm, a nationally recognized cross country course near Lawrence, KS.

Ryun's coach at the time was Bob Timmons. When Ryun graduated from high school, he was recruited by the University of Kansas, and to help seal the deal, the university hired Timmons to continue coaching Ryun at KU.

Ryun had a successful career at KU and was an Olympian and world record holder. Timmons continued to coach at KU for many years. He eventually retired and bought a farm near Lawrence KS with the express intent of turning part of it into a first class cross country running course. 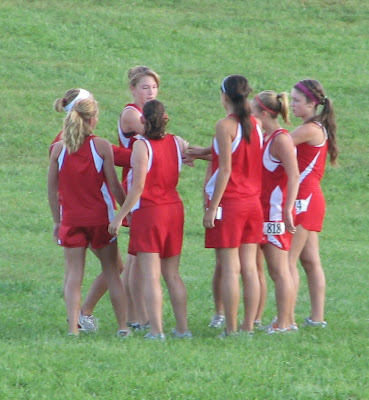 Contestants on this team hold a little meeting together before the start of the race. 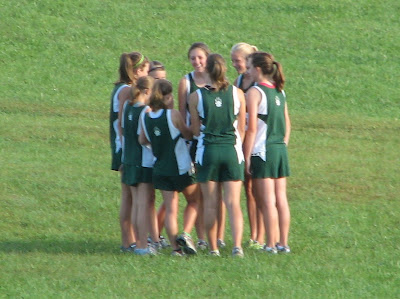 Another team getting together to encourage each other. Someone said something funny. .
The farm is now known as Rim Rock Farm and for many years now has hosted some prestigious cross country meets including the NCAA championships a few years ago. They host the state high school championship meet each year as well as a large invitational meet each year. This invitational meet is huge with hundreds of runners from the area, and is now referred to by athletes and coaches simply as "Rim Rock". 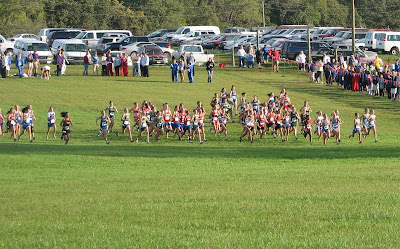 The start of a race. There were 12 races in different classes this day. . The course is beautiful. It is also grueling and very challenging. Times here at this course are 20 to 30 seconds slower than at a lot of other courses because of the terrain. But everybody wants to race here. They know this is the best race in the region. There could be as many as 2,500 runners at "Rim Rock" this year. .
It's a big damn deal!

About 30 - 40 seconds after the start. .
This year, again, Wichita East High School was invited, and I was invited to go with my son and the team. 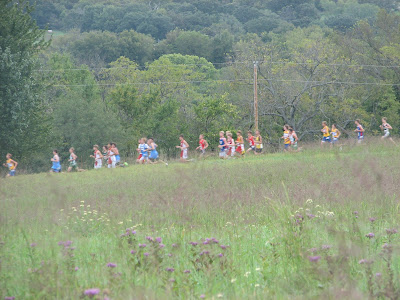 After the start on a long slow uphill rise, the runners travel across a grassy area.

A similar view of the first portion of the course. .
It is funny sometimes how the connections in life are made and how they can endure.
. One of Ryun's teammates in high school, Steve Sell, eventually became my son's running coach when he was in high school at Wichita East. My son ran some track and cross country in college as well, but now is back at his high school alma mater and coaching a newer generation of athletes.

A signpost marks the spot on one of the dreaded hills on the course. .
I ran a little bit of cross country in high school myself and my coach at the time, Joe Schrag, became a good friend of Steve Sell as they coached against each other for many years. My son and I frequently see our former coaches at this and a few other track and cross country events each year. It is always fun to catch up a bit with mentors and talk about old times. It is also fun to talk about the new crop of runners and encourage them as they try to battle the course and their own mental attitudes. 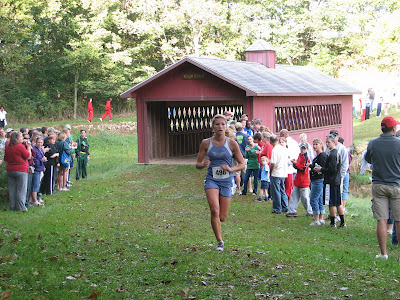 One of two covered bridges on the course. After the runners cross over this bridge, they immediately head up Cemetary Hill. .
There is, of course, a lot of physical training involved. Practices are tough and sometimes cover long distances. Sprint work is included in practice on some days. But every long distance runner knows that a large part of running is mental. It is extremely difficult to push yourself to go a little faster and harder when the pain of exertion sets in. 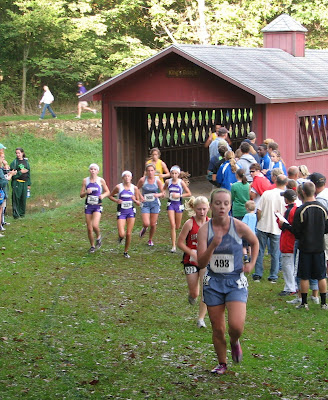 More runners tackling Cemetary Hill. There actually is a small cemetary at the top of the hill. There are no dead runners buried there to my knowledge. .
My own Coach Schrag used to tell us about the best strategy of running on hills. He said to attack the hill and "run hard through the top" and then fly back downhill. You can pass a lot of other runners this way. The natural tendency when you finally reach the top of a hill is to coast a bit and slow down. I never mastered the strategy. In my mind, after reaching the top of a hill' I would say to myself "Screw this! I'm taking a break!" 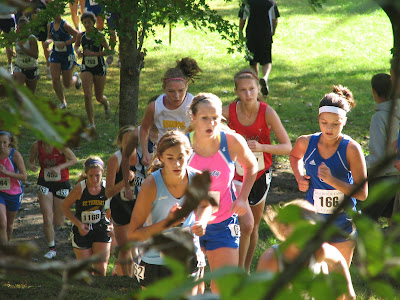 Looks of concentration and effort by runners on another hill on the course. .
Success in the sport is achieved by staying constant in your effort. It is easy to exert yourself real hard for little bursts of speed and then not have anything left for the remainder of the race. In a nutshell, I never mastered this constant effort. Inconsistency was the reason I never made it above "C" team, but I still enjoyed the sport and have the utmost respect for the people that try it. 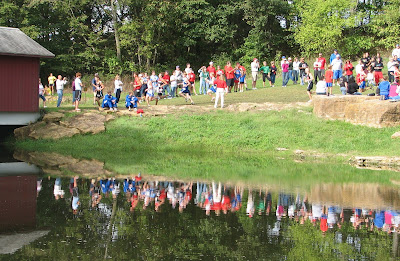 A shot of the pond at the covered bridge before Cemetary Hill. The water was very still that morning. .
It is said that Coach Timmons would have a regular routine on the bus ride home after a meet, of individually chatting with each runner about what they did well that day, or what areas they could improve upon. It was at one of these meetings with Jim Ryun that Timmons suggested to him that maybe he could break the 4 minute mark for a mile. This comment supposedly occurred on a day when Ryun was a junior in high school and had run a 4:13 mile that day. Imagine hearing that from your coach on a day when you had just beat the school record and felt pretty good about yourself. But, damned if Ryun didn't eventually do it. 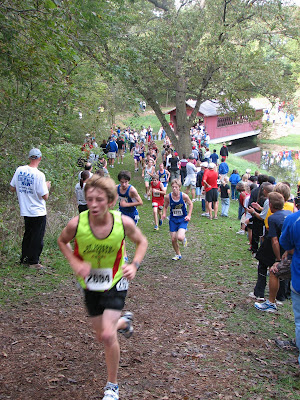 Even more runners on Cemetary Hill. .
That is part of what a good coach is all about. The encouragement and challenges to try just a little harder are a big part of coaching and life. That is part of the reason that mentors like that can become such an important part of our lives. It does not have to be just in athletics. Mentors happen in all walks of life. 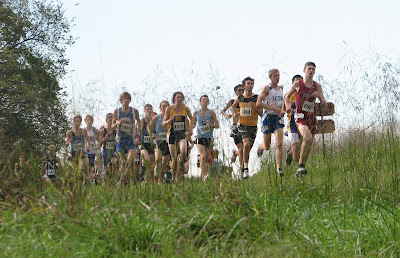 A shot of runners nearer the start from a gully by the side of the course. .
I love cross country meets. There are lots of colors in each team's uniforms. Coaches and parents are scattered throughout the course yelling encouragement. Runners are giving it all they have.
.
It's a great way to spend a day. 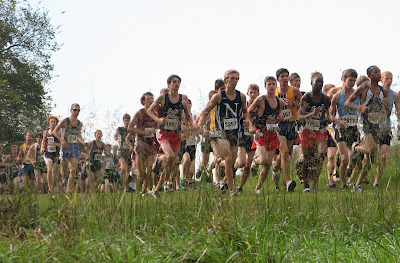 There were approximately 200 runners in each race. .
Cross Country runners are referred to as "Harriers". It is not because they are "Hairy" although I have seen many that are. Back in the early days of the sport in Great Britian, the courses were not marked like they are today. In a sort of fox and hound fashion, a group of runners (the hares) would mark the course by dropping pieces of paper, to be followed by the actual contestants (the hounds)who would then follow the course thus marked by the hares. Somehow, from this early day process the term "Harriers" came into fashion and is used to this day. 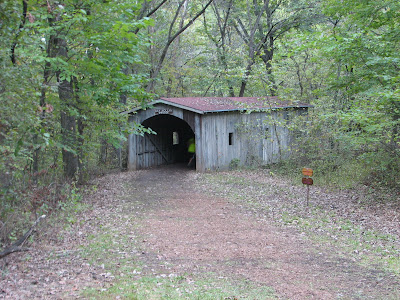 A shot of the "Oak Holler Bridge". This area was very secluded and the trees were close to the sides of the course along here. .
I love to take the camera along. I think I actually learned a bit about photography this day. I went there with preconceived ideas about the type of pictures I wanted to take. In many cases I was defeated in my attempts because there were so many people, they went by so fast or somebody would get in the way. It was difficult and frustrating to get some of the pictures I wanted. 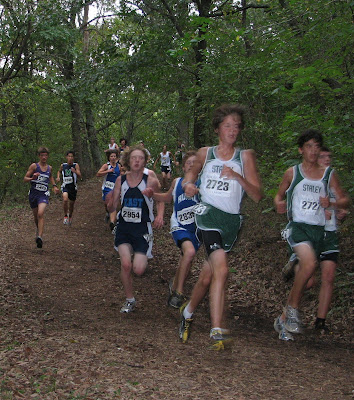 At "Oak Holler" there is a relatively steep downhill before reaching the covered bridge. Runners were literally flying along here.
.
I had a strategy of trying to get some pictures from unusual vantage points. I would for instance climb into some tree areas and try and get some pictures of runners through the leaves. In another spot I went into a little gulley near the side of the course and took some shots through some tall grasses as the runners went by. Some of this worked pretty well. 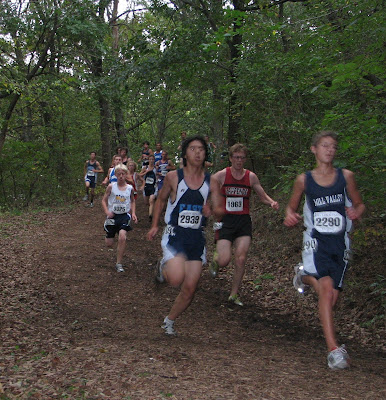 Another shot just before the runners reach "Oak Holler". The skies became cloudier as the day progressed and I ended up using the camera flash here. 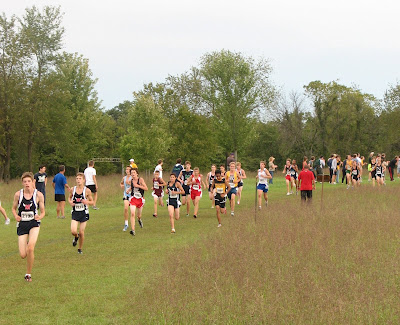 There is about 1/4 mile left to go at this point. Runners are getting serious here and trying to finish as strong as they can. 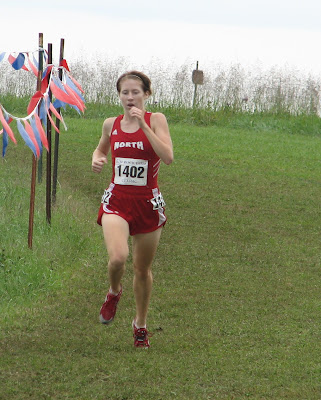 Just about 200 yards to go and this runner from Wichita North was looking very determined. She finished second in her race. I saw one runner slip and fall along this same place. It had to hurt, but she got right back up and finished amidst a few tears in her eyes. 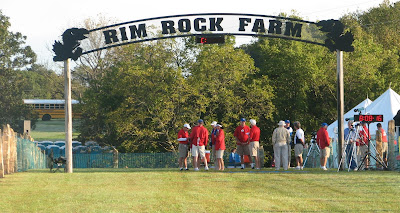 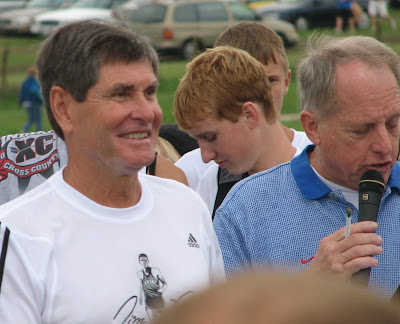 Here's Jim Ryun himself (on the left) at the finish line. He handed out the medals on this day. The guy to his right was also a teammate of Ryun's in high school. He does all the announcing at these events and told stories about Ryun's running career as the day transpired. 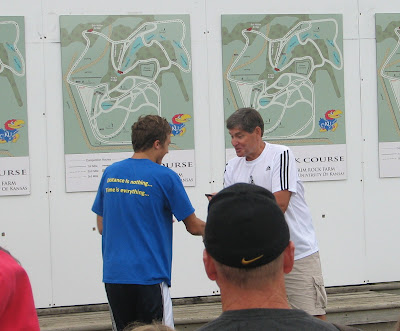 It would be pretty special to receive a medal from Jim Ryun. .
But most of all, after experiencing some difficulty in getting shots that I thought I wanted, I decided to just look around with my own eyes, and see what shots might present themselves to me. There was very little wind this day and some of the ponds were quite still providing the opportunity for some reflection pictures off the water. Some of these also turned out well. Had I concentrated on solely getting pictures of runners, I feel I would have missed many good opportunities. 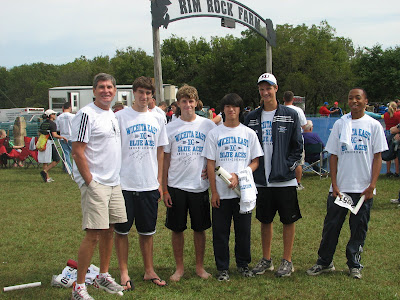 A portion of the Wichita East High team with a relatively famous alum.
.
Some of the best shots I had just sort of appeared before my eyes without any composition in mind, and with camera at hand, I was able to get some decent shots. I took well over 100 pictures this day.
Posted by cpa3485 at 3:00 AM