Getting Zenish with the Starter Switch

Okay, so maybe Zenish isn't a real word. But I did say Ohmmm a couple of times while I was doing this little minor surgery on Max. I have been having this maddening little intermittent (very intermittent) problem with the starter on Max. The problem was so rare that it whas been difficult to diagnose the actual problem, and truth be known, I am not at all sure it is fixed yet. Sometimes I would punch the starter switch and nothing would happen. Nothing at all. I fiddled with battery connections and engaged in various other feeble attempts at diagnosing the problem. Then later, as if by magic, Max would start just like he usually does. 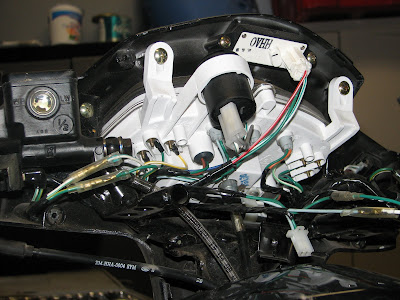 The scene underneath the instrument cluster after removing the shroud covering the handlebar.
I finally determined that maybe the problem was the starter switch itself, or possibly a connection at one of the brake levers. One of the brake levers has to be depressed to engage the starter. To check it out, the cover over the handlebar needed to be removed. Sounds simple, but you have to remove the mirrors, the turn signal light brackets, numerous little bolts and then carefully pry apart the plastic parts that fit into each other with little nobs and indentations. It didn't take an act of God, but I did say "Ohmmm" a time or two. 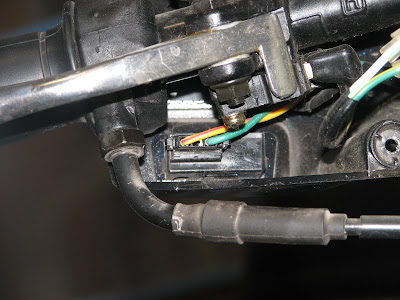 You can see the starter switch in this picture before removal. The lead wires are shown. They appeared to pass closely to the kill switch (not shown) and the leads to the brake lever for the lights.

My good friend Lloyd told me to look at the brake levers as well. They were supposed to depress or release some very tiny little plungers to turn on or off the brake lights and to open the connection for the starter. I didn't see anything wrong there.

My thought was that maybe the starter switch itself might be dirty and maybe I could clean it. Well. no such luck. It was all sealed and I was unable to take it apart. 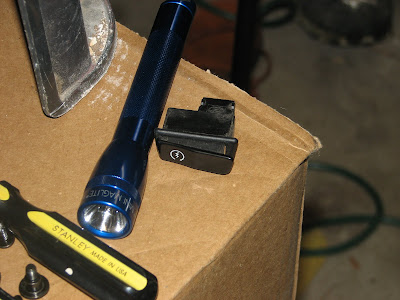 Here's the switch after removal. The Mag Light came in real handy in spite of a relatively well lit garage .

Eventually I determined that it migt be a good idea to wrap some electrical tape around the leads to the sarter switch. This would provide some additional isulation for the wires that appeared to pass very closely, maybe even touch some other wires under the shroud of the handlebar. My hope was that this might solve the problem, Hmmmmm, I know, maybe not. 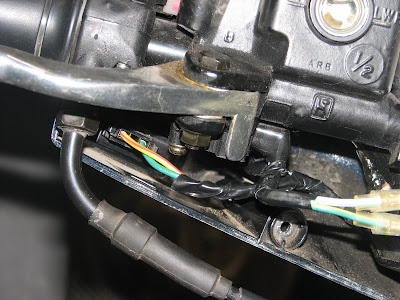 Here's the starter switch after reinstallation and with the tape around the leads.

We'll see if it works. Max has started fine ever since I did this. But did I really fix it?
If nothing else, I now know how to gat at all the "stuff" under the handlebar cover.
Small steps.
Posted by cpa3485 at 3:15 AM