After all these years. Just like Paul Simon said. From a docked I-Pod came music from the 70's. Deep Purple, Aerosmith, Led Zeppelin, Pink Floyd, Electric Light Orchestra, Jimi Hendrix, Crosby, Stills and Nash and other similar vintage music. Disco music was not to be tolerated. A couple of propane space heaters helped warm the cool evening, the glow of the heating elements providing a reddish tinge to the otherwise white lights in the garage. 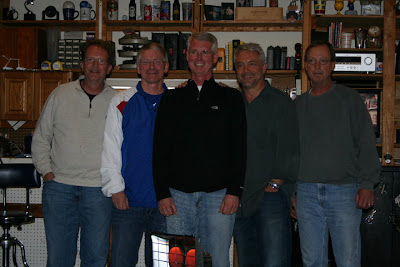 From left to right, Jim (the blog author), Jim, Terry, Greg and Mark
Lawn chairs and coolers were arranged in a circle to enable conversation. I wanted to ride to Lawrence (direct route by slab about 155 miles) but because of rainy weather I took the famous Canadian Subaru up to Lawrence to meet up with some friends that were fraternity brothers of mine in college. We met at Terry's house and congregated in his "Man Cave" for beer, burgers and remembrances of older times. I hadn't seen a couple of these people in over ten years. Most of them I had not run into except for a very few times in the last 30 years. We kept in a somewhat loose contact with each other over the years, but rarely got together. With kids growing up, family and work commitments, it was always difficult to arrange get togethers with more than 2 or 3 of us. Most of us now are "empty-nesters" and it became a bit easier this year to arrange a date. Facebook became a way to communicate with each other for the planning of the event. We jokingly argued about who was friends with who on Facebook and why or why not. 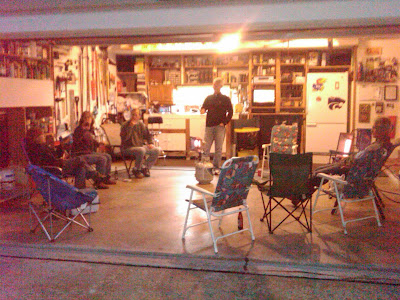 A view of the "Man Cave" from the driveway.

We all looked a bit older, much shorter hair, some with gray hair, etc., but we were still the same crazy people in many respects. We recalled various events and spent a lot of time asking each other things like "Do you know where so and so is now?" or "Who was that guy that did that crazy thing that day at the lake".

One fun thing we did is tell each other about our kids, what our experiences were like in raising children, etc. There were some good (and some maybe not so good) stories told about our kids. We made the Catholic couple amongst us go last because we knew it would take awhile. It did. They have 5 kids, most of the rest of us, just 2. But we are all very proud of our offspring. There were supposed to be 6 of us there along with some of the wives. One guy didn't make it to the party, and we spent some time telling tales about him to his detriment. His loss. In the group I ran around with, there were 3 of us named Jim (one being the guy that didn't show up) and that got sort of confusing at the time. So the 3 Jim's were known by their last names instead. My nickname was "Roger" then. 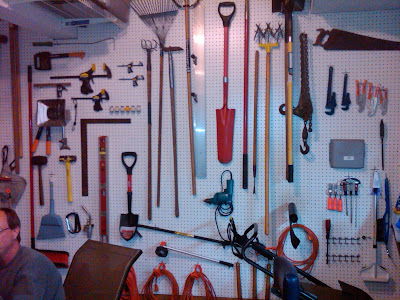 The unbelievably organized north wall of the "Man Cave". There was some discussion of the usefulness of some of the equipment, particularly the small shovel toward the left. It was eventually determined to be a "good" by the group.
One is an attorney, a couple are self employed, another is a corporate exec. It's a wonder how we survived those years, but we all remain good friends and we had a great time reminiscing. We gave Terry a lot of ribbing about his "Man Cave". In his garage there is a TV, a fridge full of various types of beer, and a collection of rather unique bottle openers. His wife said that there were only 2 stores that Terry frequented, Home Depot and the liquor store. He also has become a serious bicyclist. There is a display of number tags from a series of annual MS tours (usually about 150 miles) he has rode on in honor of a childhood friend of his from his hometown (who was also a frat brother) and had died years ago from Multiple Sclerosis. A great guy that just went too soon. The level of storage sophistication with pegboard and hooks was amazing. We marveled at the shelf containing cleaning fluids and lawn chemicals, all neatly arranged and easily found. Terry said that nothing pisses him off more than not being able to find something. Rest assured that my garage is not near as organized. 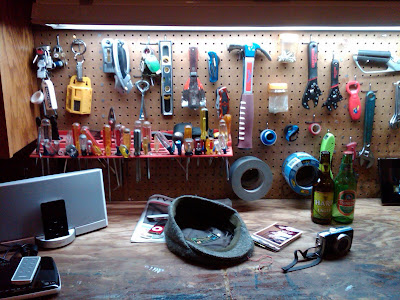 Are your screwdrivers and hammers this organized?

The stories were many and too lengthy to describe here. The laughter was raucous, the food fantastic and the fellowship even better.

Warning! This story, very true, is not for those that are faint of heart.

One time the frat rented a school bus and took maybe about 50 of us to a Kansas City Royals baseball game. The Royals had a fairly new stadium and were somewhat competitive in those days. George Brett and Frank White were a couple of the stars on the team. 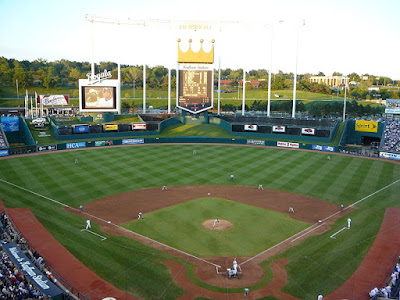 We sat in the cheap seats just beyond right field

It was a hot August day. We all had our shirts off and basked in the warm August sunshine. Of course there was a fair amount of beer consumption. We all sat together in the cheap seats in right field. We had fun heckling whoever was the right fielder for the opposing team right in front of us.

In the bottom of the 9th inning, the score was close, but the Royals were down a run. There was a runner on base. Two outs and George Brett came to the plate. Now, George was a left handed batter, a great hitter (notorious for the "pine tar" incident) and when he hit the ball he generally pulled the ball to right field where we were conveniently sitting. Thoughts of "Mighty Casey at the bat" and saving the day crossed our minds as he sauntered up to the plate. Plus, wouldn't it be cool for one of us to catch a walk off home run ball that won the game? 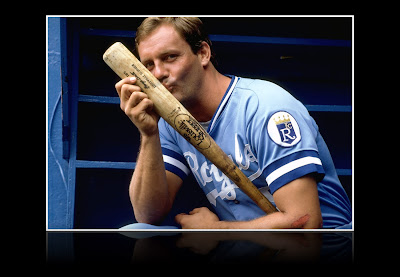 The celebrated hero of the day, George Brett. (Note the trace of pine tar on the bat)

The crowd was excited, tension was high. A couple of pitches later George took a swing. The ball took off like a rocket, a hard line drive seemingly headed to the right of us toward center field. The ball looked like it was long enough to be a home run. Could it be that George would save the day?

But as the ball approached, we could see a lot of spin to the hit and the ball started curving toward us. Cries of "Oh Shit" were uttered as we all stood up, hurriedly put down our beers, stretched out our arms and hands in a vain effort, in our somewhat inebriated state, to try and catch the ball.

But as you can imagine, the possibility of catching the curving and speedy missile was going to be difficult. Our reaction times were not good and the ball eventually hit a guy very close to me in the chest, bounced off a seat and was captured by a fan many rows away. The ball actually left a little imprint of the laces on his chest. It had to hurt!

But at the time we were not concerned for his health, we were just mad that he didn't catch it potentially preserving another little trophy for the frathouse. Turns out he was okay, but he had a pretty nice bruise for his paltry effort.

We laughed like crazy as the crowd roared in celebration of the victory. 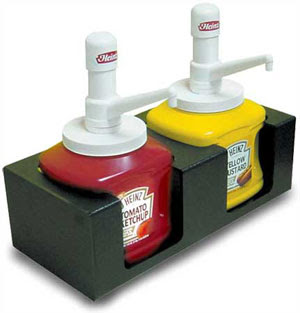 A fine example of a concession stand dispenser.
As we left the stadium, one of the guys that had a well deserved reputation for being certifiably insane, thought it would be fun to "borrow" one of the large mustard dispensers from one of the concession stands. It was bright yellow, shaped like a small barrel with a pump on the top. It contained a copious amount of mustard (at least a gallon).
Beats me how he got it out of the stadium without being seen, but he succeeded. Now you need to know that the pump on this "weapon" was about 4 inches long and was powerful enough to squirt the pungent fluid at least 10 feet or so if handled properly. You can only imagine that no good was going to come from this.
In short order many of us had been "shot" with warm mustard. Yecch! 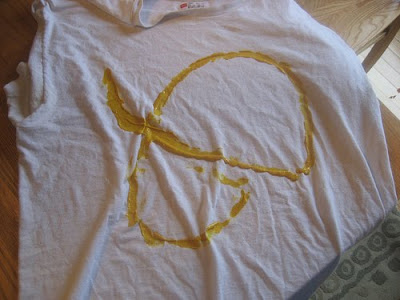 The result of being shot by the "weapon" Rumor has it that certain "Axis of Evil" countries were considering this weapon for their armies. They weren't able to make it work effectively. We did!
Not only that, but our assassin friend started to turn the weapon on other unsuspecting patrons of the game as we left the confines of the stadium. Most were not at all amused. We were lucky that a fight didn't start. We all pretended that we didn't know the guy, but we were laughing so hard that it was pretty obvious he was with us.
Various vehicles left the stadium through multiple lanes of traffic. I am sure it was accidental, but more than a few times streams of mustard were seen emanating from inside the windows of the bus. The shots landed at times on hoods and windshields of cars that had the bad luck of just being in close proximity to this bus of destruction and carnage.
The natural reaction of drivers that had just had their windshield sprayed with mustard was to instinctively turn on their windshield wipers. But this feeble attempt at improving their visibility only resulted in smears of mustard across the entire windshield. 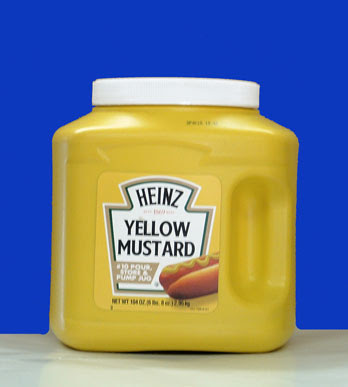 With the "weapon" on the bus an even bigger mess was made. I'd hate to have been the person responsible for cleaning up the bus after us, but somebody would have had to spend a great deal of time with lots of paper towels and cleaning fluids. The bus probably smelled like stale mustard for months thereafter.
None of us escaped without having at least some yellow substance on us that day.
They could have written the "Animal House" movie about us. We had all the characters.
Posted by cpa3485 at 3:01 AM