One of our cats, "Mo", looked up at me from his sleeping place on a couch with an expression on his face that said, "What the heck are you doing? It's not 6:30 yet!" All the animals in our "pack" know that 6:30 am is the appointed feeding time. It is hard coded into their psyche to wake up at this time and expect food from their "human" providers. Alarm clocks are not generally needed in our house. Today, though my cell phone notified me it was time to get up and start "smokin'". 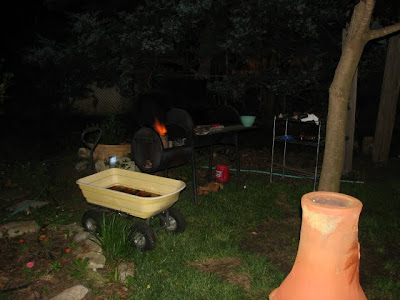 At 4:30 I was tested by my photographic ability to take a picture in almost no light. I used the flash. It was easier, and I wasn't real awake yet.

In fact it was 4:30 am and still very dark outside. I was captivated by the smells of the air on a lazy Sunday morning: The meat was drunk after spending a night bathing in a copious amount of Jack Daniels. The aroma of the alcohol was present as I put on a rub of fresh grown herbs (from our garden), salts and sugars. The smell of the oak and mulberry starting to burn in the firebox of the smoker was somehow sort of sensual. 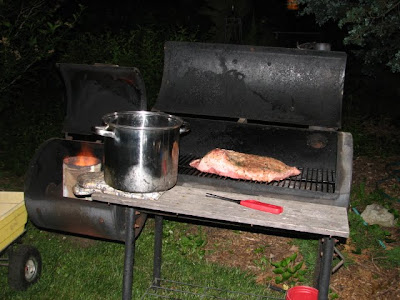 The drunk meat is placed on the cooker after a generous application of a rub.

Then there were the sounds. The birds were starting to chirp. I wonder what they actually say to each other at this early time. The neighbor's outdoor fountain was making its usual sounds. They have a tall privacy fence. We can't see the fountain, but can hear it. An occasional car would go by on Woodlawn Ave just a couple of houses away. The neighbor's yippy dogs were asleep. No complaint about that. It was very quiet. 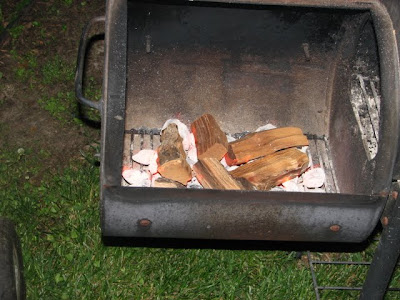 There is something very primitive or tribal in nature to the process of burning wood. A charcoal base is used just to get things started. All wood fuel thereafter

The sky was just barely starting to turn lighter as the sun neared the horizon. It would still be awhile before the sun made a blazing appearance. The full moon bathed the yard in a soft light as only the moon can. 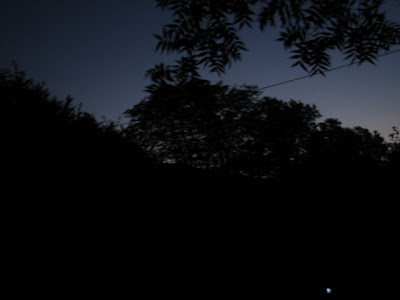 Crappy attempt to get a shot of the barely light sky, but you get the idea.

Eventually, as time marched on, the dogs let me know what time it was. I had just put new wood on the fire and went back into the house to feed them. Later today it would get hot, maybe with some thunderstorms, but this morning I was enjoying the cool air and being outside in it. It could only have been better if I was out riding on this absolutely beautiful morning. 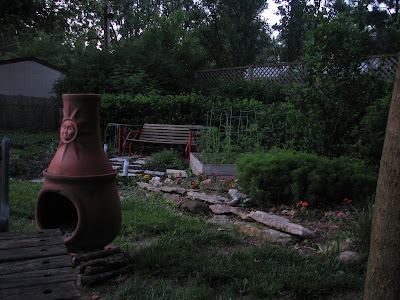 I went back outside. I got out the laptop and finished up a couple of scheduled posts to the blog. The sun eventually made its appearance and the newspaper arrived. I picked up a few "dog bombs" from the yard knowing that other humans were coming by today and wanted to be sure that there were no "hazards" in the yard. 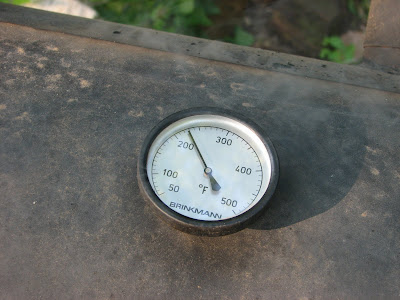 Sorry Bobskoot, it's all in farenheit, but this is the ideal temperature goal for about 7 hours of cooking
The other humans were coming over today to sample some brisket that I was "cookin'". I had not done a brisket in the smoker for awhile. It is not a lot of work, but to do it right, takes a long time (at least 6 hours) at a low (225-275 F) heat. So most of the effort is just keeping the fire going and watching the temperature gauge occasionally. 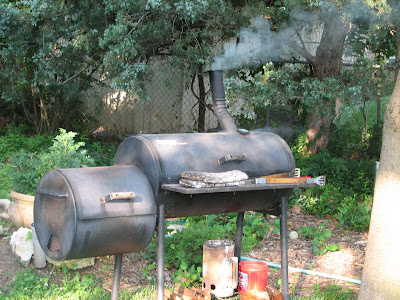 The cooker in its glory. It's starting to get a bit lighter out.
About every 45 minutes or so I put a few more chunks of wood on the fire and check the temperature. Other than that, there is not much to it. There is much time available to enjoy being outside and enjoy the sights , smells and sounds of the early morning. 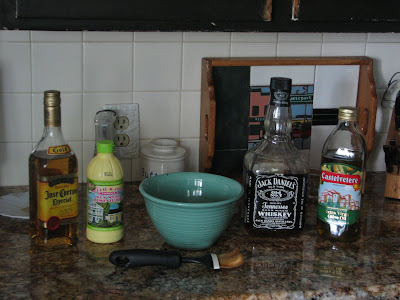 It bocomes time to create a "mop" for the meat to cook in after wrapping in foil. We actually didn't use the tequila in the mop. (The tequila was for later) I threw in a few spices in the mop as well, but not much, mostly pepper. 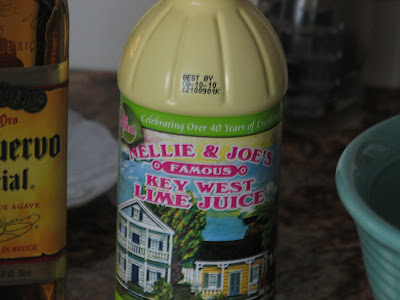 I was amazed to discover the origin of the lime juice. Conch, do you know Nellie and Joe? .
The sun started to warm the air as the smoke from the fire continued to bellow from the vent atop the smoker. I turned the meat over at about 7:30am and although it had a long way to go, it was starting to brown a bit and looked good. 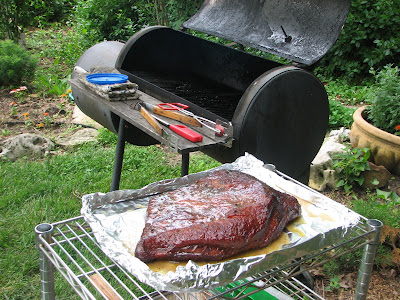 The ceremonial wrapping of the brisket. A double layer of heavy duty foil with lots of the mop inside.
.
To barbecue experts, the creation of a "smoke ring" in the brisket is a desired goal. A faint discoloration just inside the surface of the meat from the smoke is recognized in smoking competitions as a sign of quality cooking. It is not as easy to do as it sounds. I have had success at times, but not every time. The meat we bought came from a mennonite farm near here, not a huge industrial packing plant. No growth hormones were used and the cattle are raised on farms using time honored traditions. It is much more expensive than what would be in a grocery store, but amazingly well worth it. 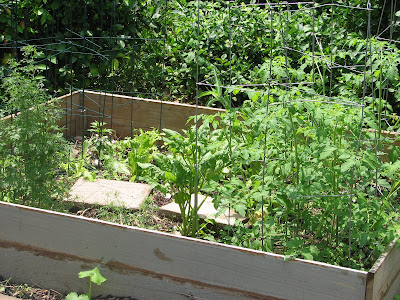 A shot of the garden. Tomato plants on the right, some Anaheim peppers on the left, Cilantro, Lettuce and Spinach. We have had some awesome salads already this summer.
.
I had to ask for a cut of the meat with the fat still on it, and the guy at the meat counter of the local butcher shop we like, seemed to sense immediately why I wanted it that way. They had some "in the back" he said. We smiled at each other as he put it on the scale (close to 9 lbs). He knew instinctively that I was going to smoke it and the fat would almost melt and disintegrate into the meat and provide the flavors desired by those familiar with the concept. 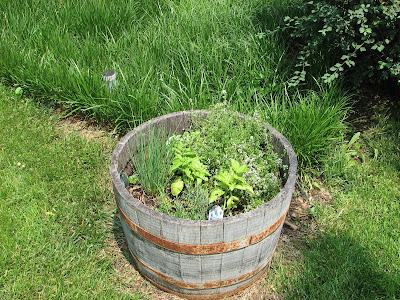 A shot of the herb garden. Basil, thyme, rosemary, oregano and lavender all fight for space in this little barrel. The oregano and basil are winning so far.
.
My smoker is almost perfect for this purpose. There are many more revered types of smokers out there on the market but this one does just fine for us. The firebox sits to the side of the cooking area providing indirect heat and smoke to the cooking area. 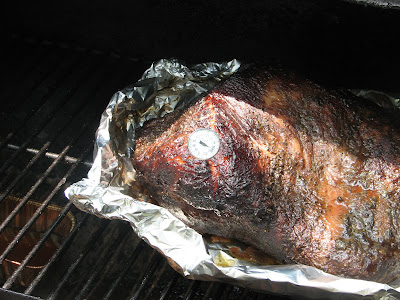 After 7 hours I check the temperature with a meat thermoneter. I was aimimg for 160F. Turned out to be 190F. Very nicely done and very moist with the use of the mop.
.
After close to 3 hours, with my hope for a smoke ring firmly in place, I wrap the brisket in foil and pour a mop of various fluids on top. Some experts don't wrap the brisket, but wrapping helps speed up an already very slow cooking process. After all, I don't have all day to do this. Humans are coming by between 12:00 and 1:00 pm and like the dogs at the 6:30 am feeding, they will demand to eat what by then will smell fantastic. 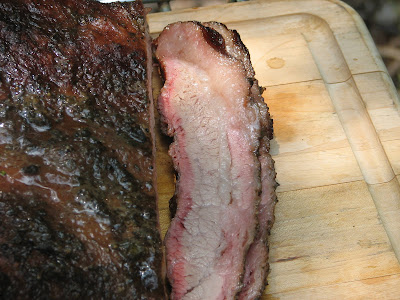 The first couple of slices are made. I am ecstatic. The smoke ring is almost perfect.
.
We had a brief rainshower at about 10:30 am. It managed to make the air very humid. With a high temperature today expected to be in the upper 80's and a possibility for thunderstorms, this was bound to be a very sticky day. The sun came out with a vengeance after the rain making the air feel very heavy compared to what it was like at 4:30am. 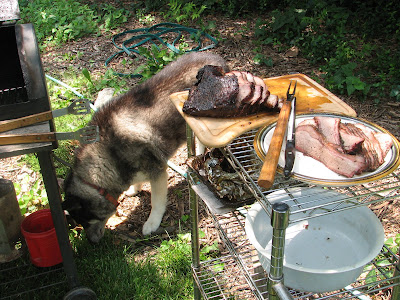 Madeline, our Shepherd/Husky is always curious as to the droppings of liquids as they come out of the cooker. The little coffee can is supposed to catch them all, but a few drops were found to the benefit of the dog.
.
I placed the last bits of wood on the fire at about 12:15pm. Except for a brief period of time during the rain when the cooking temperature dropped a little below 200, I was able today to keep the temperature between 225 and 275 most of the time. Aiming for a prescribed temperature with a wood smoker isn't always successful. Some woods burn hotter than others. It takes some experience with your equipment. I was happy just to stay close today. 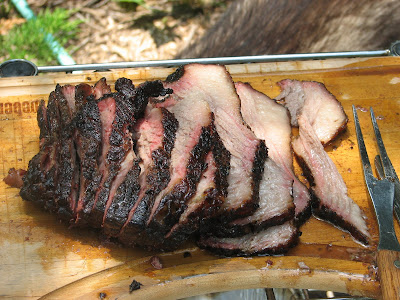 More slicing ensues. It's hard not to eat it all right there, but others will be angry if we ate it all.
.
I hadn't even opened up the oven portion of the cooker since I wrapped up the brisket at about 8:30am. You have to fight the curiosity to open it up and look at it. Opening it up can drop the temperature quite a bit and cause more cooking time. I placed my faith in the Barbecue Gods that all would turn out well in the end and a special nirvana would be created within the confines of the foil surrounding the beef. 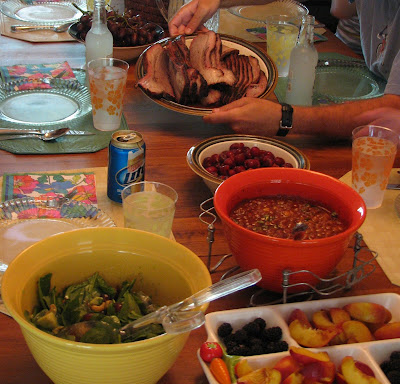