If two hypotheses are equally accurate and neither appears more probable than the other, the simple one is to be preferred over the complicated one, because simplicity is practical. Where the hell am I going with this? Let me explain. Just soon after some warranty work was performed on my scooter recently, I began experiencing a starting problem. Not enough juice from the battery to engage the starter even though the lights and accessories all seemed to work properly (and yes, no blown fuses). I was so mad at the repair shop that did the warranty work that I began to suspect that maybe they did something wrong. Was there still some sort of short somewhere? Did they cause this? My early suspicion was the wiring to the horn which was the subject of a maintenance bulletin. It had caused a blown fuse about a year ago. 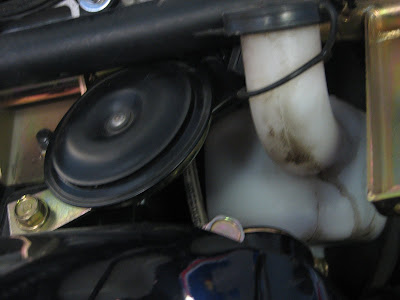 The horn next to the coolant overflow reservoir. The wires to the horn originally ran underneath the radiator, sometimes causing a short. They have been moved now.
It was also suggested by a good friend that maybe I just had a bad battery. I took the battery out and took it to a local battery store. They said it was pretty dead, but at no charge they said they would attempt to charge it up, test it and see if it was good or not. They did charge it up and test the battery and pronounced the battery to be healthy. Two days later, the scooter didn't start again. Hmmmmm I had been working with my good friend who helped me do some of the maintenance work I needed to get done on Max. The morning after we had worked on Max I noticed this box by my garage. A new battery was in there along with a trickle charger. A note said to try this battery out and see if that fixed the starting problem. If it didn't, then we would have to look further into some sort of electrical problem. 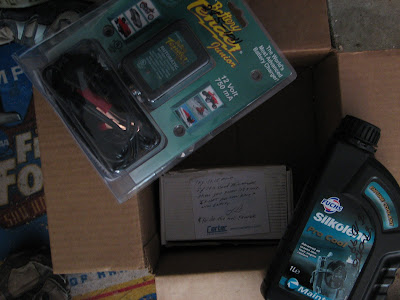 A box containing a battery, a charger and some extra coolant. A good friend is invaluable.

In trying to diagnose what my problem was, there seemed to be two possibilities: 1) I had a weak battery, pretty simple to fix. Or 2) There was a short somewhere causing a drain to the system. Would be potentially hard to track down and difficult to isolate. The timing of the starting problem closely coincided with the time that my scooter was in the repair shop. I didn't like those guys anyway. And the battery store said the battery was good and should maybe last 5 years or so (it was only 2 years old). So it was easy to assume I had a problem that might be tricky to solve. 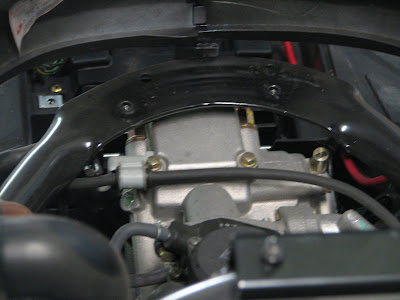 The SYM has a 4 valve engine. Intake valves on top, exhaust below. There are 2 valve covers (the top shown here) held on the engine by 3 bolts. Two bolts are easily accessible, the third is under the bracket that holds the seat. Had to get that one from the other side. Oh well, if it was easy everybody would do it.
But, as you can maybe surmise by now, the simple solution turned out to be right and I made the whole affair seem more complicated and difficult than it really turned out to be. The new battery did the trick and the starting problem went away. 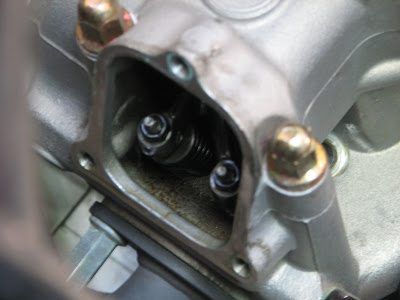 The exposed valve tappets on the bottom of the engine. We thought we might have to disassemble all of the body panels off the scooter to get at them, but turned out it wasn't that bad. Just a little inconvenient. We did have to take part of the floor off. A repair stand would help at this point but a little garage floor dust never hurt anybody.

Why is it that we sometimes assume the worst? Is it human nature? Is it because I had such a bad experience at that repair shop? But anyway, Max is now back to being his old dependable self. All is well with the universe. I have now learned a lot about Max with the help of my good friend. I have changed the engine oil, changed the gear oil, flushed and refilled the coolant, changed the spark plug, replaced an air filter and even inspected the valve clearances. The valves were all spot on and didn't need adjusting. I know how to do all these tasks now. And I replaced the battery. 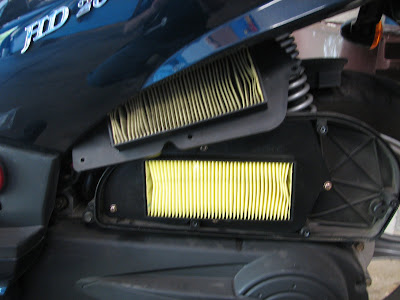 The old and new air filters.
I still haven't re-set the clock though.
Maybe someday I'll tackle that too.
.
Many thanks to my friend for kindly "showing me the ropes".
.
Posted by cpa3485 at 3:33 AM