People of the South Wind

The name Kansas is derived from a tribe of Native Americans known as Kansa. One popular meaning to the name is the "People of the South Wind". Not that the wind comes entirely from the south, it doesn't. But we do get a lot of wind from the south. And sometimes the winds here are pretty strong. Sunday 10/18/09 This was the day to travel back from Topeka, where I attended a high school reunion, back to Wichita where I live. The weather forecasters were predicting a sunny day with a high temperature in the 60's. That is a definate improvement over the temperatures I experienced last Friday. The big problem was that the wind was supposed to be from the south at 20 mph with gusts to 30 mph. Ahh, yes that warm south wind. I knew about the wind in advance, but wasn't looking forward to it for the ride home. I wondered about how the scooter would handle all that wind when it was in my face. I was sure my trip home would be slower than the ride last Friday. Not to even mention the crosswinds when I would be traveling in a westerly direction. I was taking the same route home as I did when I came "up" from Wichita last Friday. The route consisted primarily of either straight west travel or straight south travel, with little in between. The morning low on Sunday was 32 degrees. I looked out the window of the hotel and looked at Max with a little frost on his seat just as the sun was trying to come up. How about the flames on that pickup! 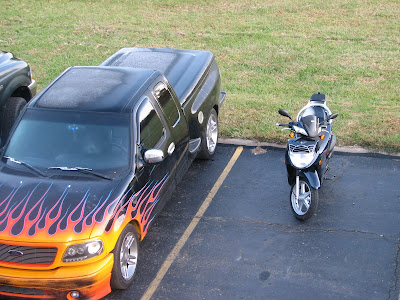 I had breakfast with Greg, a great friend from college who now lives in Topeka. We met at the IHOP, had a great conversation and we talked about many things as we ate. Had eggs and pancakes, coffee and orange juice. I was a bit hungry and wanted the food to last me until I got home later that day. It took me 6 and a half hours to get here, although the trip was marked by many picture stops. With the wind for today I wasn't sure how long it would take to get home. Wasn't planning on a lot of picture stops, but was certain that I wasn't going to travel as fast as last Friday.

As I took out, for some reason, an old Irish blessing came to mind. You know the one, it goes like this.

May the Road rise to meet you

May the wind be always at your back

May the sun shine warm upon your face

And the rain fall softly on your fields

And may God hold you in the palm of his hands

The first part of the trip was westerly. Fun it was not! By the time I left, the temperature was a little warmer and not an issue. Or at least I didn't think about the temperature as much. I was pretty busy keeping the scooter straight sometimes. Oh, maybe it wasn't all that bad, but there were some moments. Like coming out into the open after passing a hedgerow and the crosswind catching me. Or going down into a valley where I would be reasonably protected from the strong winds, then coming to the crest of a hill and being pummeled by the wind as I reached the top.

The wind was never at my back today! But I was hoping that God would, well you know, do some watching over me.

During the first part of the trip I thought I was doing pretty good to maintain 40 mph going west. Any faster didn't seem too safe. Again there was almost no traffic after I got out of town and I didn't hold up any other drivers. I made a mental note to try and stay relaxed, but sure had to remain very alert as winds would sometimes surprise me and I would find myself about a foot to the right of where I was just a second earlier. Leaning sort of helped, but not always as the winds were fairly gusty. I remembered that I had once participated in a bicycling tour called the "Wicked Wind 100" back in my bicycling days.

As I was getting ready to fill up the scooter, an "old boy" in a pickup drove up and got out. He was friendly, saw me and asked:

"Isn't it a little windy out here today?"

Many potential answers raced through my mind. You know like:

You dummy! Isn't it obvious?

Cursing at him crossed my mind, but knew that he was, in his own way, just trying to be friendly.

So I just replied with "Yeah it is, thanks for reminding me!"

I noticed a church just on the next street with a parking lot full of cars. After all, it was Sunday and about 11:00 am. I thought about that Irish blessing again. And again.

I continued to fight the crosswinds for awhile, maybe got a little more comfortable with them, but never entirely, and was relieved to eventually turn back south to face the headwinds. Probably not a lot more fun, but hopefully less tricky and with fewer surprise wind gusts.

It did turn out to be a bit of a relief. Fighting the headwinds were much easier even though I rarely got above 50 mph. It wsn't that the scooter couldn't handle a higher speed, but more that I just wasn't comfortable with it. I have driven in strong winds many times, but usually in town where most of my riding occurs. On a highway, the situation is different. I had just gotten Max back from the shop and I really didn't want to put any new scratches on him.

This shot was taken near where the road turned back to the south. It looks easterly. I think you can see the effect of the wind on the grasses. 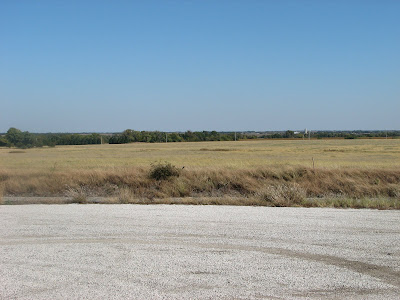 The real reason for the stop was not to take a picture. After all that coffee and orange juice earlier in the morning, well you know, I needed some relief. Another nice thing about traveling on a scooter or motorcycle. You can stop lots of places for that purpose. I knew that it was not going to be a problem. Hell, everybody was at church! (Not trying to be irreverent)
But an old song came to mind as I got off the scooter. Remember Jim Croce? , a recording artist back in the 70's. One of his most famous songs was "Time in a bottle", a very nice love song. But another song he did was "You don't mess around with Jim". A few lines from the song went like this:
You don't tug on Superman's cape
You don't piss (spit) into the wind
You don't pull on the mask of the Old Lone Ranger
And you don't mess around with Jim
The second line above is a life lesson well worth remembering. And I did.
So I aimed north! Good thing!
A little while later on I passed by this old one room schoolhouse. When I made the trip up last Friday, I remembered passing by this and that I didn't stop to take a picture. But I did stop this time. 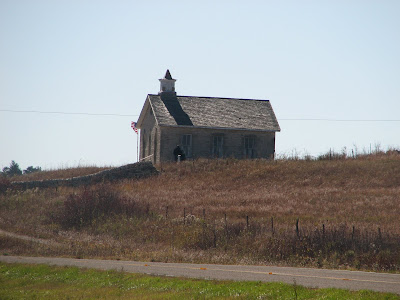 The remainder of the trip was relative uneventful, albeit a lot slower than the ride last Friday. Due to my slower speed, a few cars would pass me, but like last Friday there was not a lot of traffic.
When I turned back west for the last long westerly portion of the trip, I even became a little more comfortable with the crosswinds. I regularly had the scooter at 50 mph. Not sure if I was any more adept at driving in the crosswind as much as the change in terrain. The second portion of the westerly travel was in an area of few trees, no hills and it seemed like the wind was more steady, not quite so gusty.
As I approached Wichita, and home, various thoughts crossed through my mind. While riding I discovered a great joy at being alone with my thoughts. Did a lot of thinking on the trip. I was ready and anxious to get home because I was tired of fighting the wind.
But at the same time, I was not at all sure I wanted this experience to end.
It was a fantastic weekend. I wished at the time I could have shared my fun with my wife and family. And then there are the blog readers out there. I did a lot of thinking about what I would write after I got home. A large part of these last 2 posts were pretty well written in my mind before I got home. I arrived at home safe and sound about 3:30 pm.
Herein lies my feeble attempt to share the experience with other people.
Lots of great memories!
Posted by cpa3485 at 3:00 AM