Our city leaders over the past years decided that the downtown area needed a little spiffing up. So over the course of time we have erected some statues and other items of artwork in the downtown area. A lot of these are statues that are placed strategically on city walkways so that all citizens can enjoy them. Some of them are actually very nice. Some a little strange. Others downright wierd.

This first one is called the Keeper of the Plains, and this statue appeared on my first blog post and is situated where the Little Arkansas and Big Arkansas rivers meet. It is actually quite nice and serves as a focal point for the community. The St. Louis Arch it isn't , but it's okay for our fair city. Just remember, the river here is not pronounced Arkansaw. 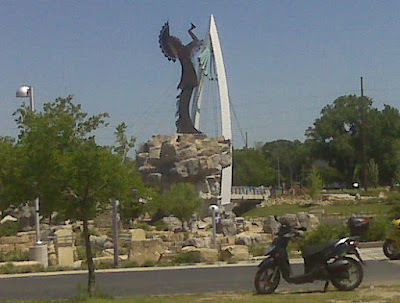 This next one deserves a little explanation and has a bit of a history to it. There are 3 pictures corresponding to each leg of the sculpture. Not sure what it really is, but Artsy it is. It is known locally as the "Tripodal" 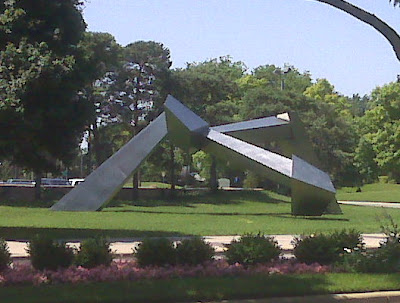 It's a gigantic piece of metal, symbolizing who knows what. It has been in a couple of various locations over the years. For about 7-8 years in the 90's, nobody knew where to put it and it was actually stored somewhere in a warehouse before somebody dug it back out again. 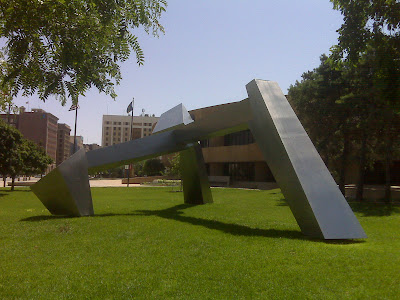 Right now it resides just east of the river in front of the Century II convention center. 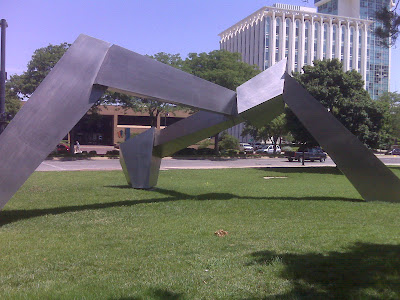 Whatever you say it is, it is definately unique. No city I know has one like it. (Maybe no city wants one like it.) 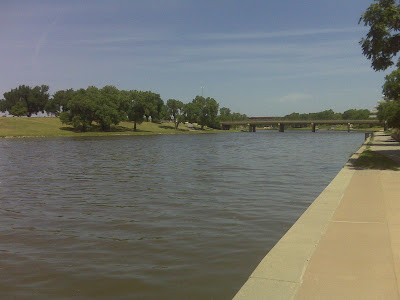 Here's an upstream view of the river, just downstream of the Keeper of the Plains Statue, and just west of the main downtown area. 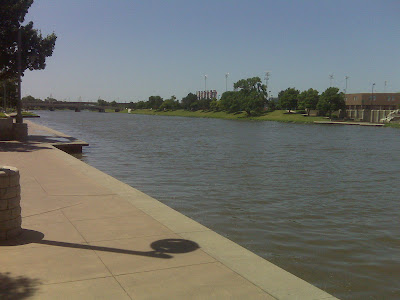 Here's a downstream view. There are nice walkways and bicycle paths along the river. (Sorry, no motorized vehicles.)
The next picture is of the Douglas Avenue bridge. The city has decorated the bridge with some hard to describe metal things that are 40-50 feet tall and adorn the bridge. They may be a little unusual, but they get decorated with lights at Christmas time and are pretty then. Sometimes wonder how much the city spent on them. Bet that I don't want to know. 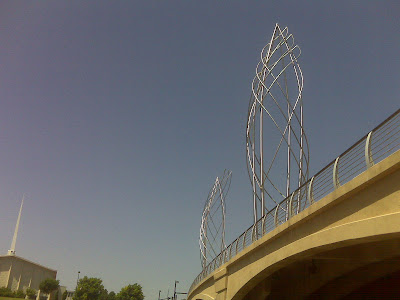 A view west from the east bank of the river at an interesting set of blocky things on the other side. 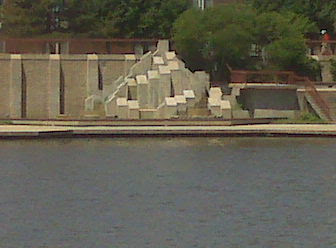 Another view west from the east side at the local minor league baseball park. The city has a very interesting baseball history. This ball park was built in the 30's as a WPA project during FDR's administration. It has been updated some over the years. The right field fence backs up close to the river. 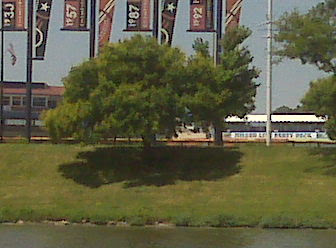 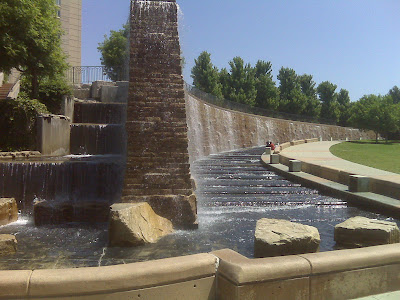 People aren't supposed to, but many wade in the water there. On a hot day it would feel very nice. 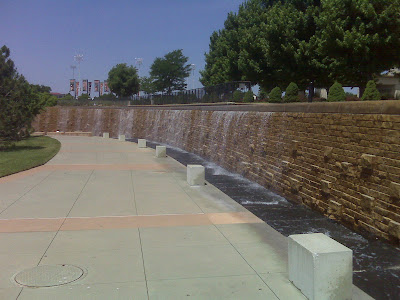 A view of the same waterfall looking back toward the river. 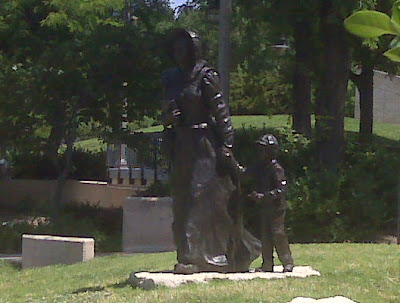 And finally for today's post: a statue of a lady with her boy next to the river.
We have a major festival along the river every year around the first part of May. About a week and a half of various activities, concerts, food and events. This year's festival occurred at about the same time as I started this blog. You'll have to wait a year for a report on that, but as long as I am still doing this, a report should be forthcoming.
And finally, some fountains near the river walkways. 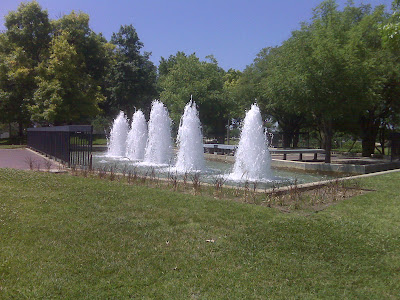 Part 2 of this report will cover the artwork on the main downtown streets.
Posted by cpa3485 at 9:15 AM