The Guy at the Gas Station

There was this guy in a suit at the gas station filling up his SUV.

He was just standing there with his arms folded.

Staring at me. Watching me.

Not sure if he was admiring me, or thinking I was crazy. Ask me if I care.

I had ridden Max to work almost every day for the past 3 weeks. In very hot weather, too. But as long as you are moving, 110 degrees doesn't seem so bad , does it? At least it only takes me about 15 minutes to get home. And Thank God for Mesh Gear.

But I needed gas this morning and there was that guy filling up his SUV. I rode up and he was already there. Arms folded, watching me ride up.

I can do this pretty quickly. I don't even take off the helmet, just pop up the visor. Had my wallet in my jacket with my card ready to go, no need to even open the top case. Key out to open the gas cap. Done. Selected the mid-grade fuel, entered my pin #, popped the hose in my tank. I fiddle with the angle of the hose to maximize the fill. The guy in the suit is still watching me, arms folded.

A couple of minutes later, I'm done. Pop the gas cap back on. Key back in ignition, press start,
Vroom Vroom, I maneuver Max off the stand and start to move off. 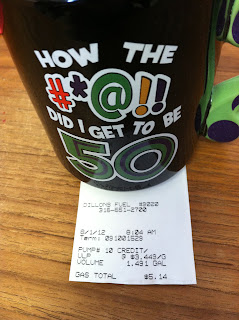 As I ride away I notice the "suit" is still watching me, arms still folded, gas pump still pumping away in his SUV.

I wondered about him as I rode to the office. What was he thinking. We made eye contact, but I could not tell what his mood was. I thought for a minute he was maybe impressed that I rode a scooter and was doing my little part in saving planet earth by not using as much fuel as other people. Helping out with greenhouse gases, you know.

But then I thought, maybe he was thinking that I was an idiot to ride a two wheeled vehicle in such ridiculous hot weather. And he might be right about that. I thought about him riding on into work, in his air conditioned SUV, cold air blasting in his face, wearing his suit and tie. Thinking about all the other suited people he would interact with today. Lots of them riding their SUV's to work, cold air blasting as they wore their suits and ties.

But then I thought as I said before:

"I don't really give a S&%T what he was thinking"!

He doesn't know the feeling of freedom! He can't really appreciate how cute that blonde is, in the Honda next to you at the stop light that you just pulled up to. He doesn't smell the aroma of the bakery you just passed by. He doesn't see the color of the trees, how really green they are. He can't imagine the exhilaration of blasting down a country road with no traffic on a beautiful day. He's got windows between himself and the rest of the world while he's in that SUV. As Pirsig says, those windows are like TV screens that insulate you from the real world around you.

He just doesn't get it.

Ride on and Carpe Diem my friends!

PS. I bet he spent a lot more than $5 at the pump this morning! Man, He really doesn't know!