Went for a hot Sunday morning bicycle ride. I had sort of planned to ride by a certain destination. But a certain bike path looked good when I approached, so I changed my mind and took a new direction. I didn't regret the decision.

Been thinking about the direction of this blog lately. I have to admit that some changes in focus and direction may happen. I thought about that as I rode this morning.

I received excellent news from my cardiologist this week. Fantastic news! Spectacular news! Good enough news to cause a change of outlook. He thinks my recovery is remarkable and better than he expected. For some time I had been living with a concern as to how much longer I would live. It now looks like I'll be around for a long time to come.

It was a great ride this morning. Slight breeze, lots of sun. Time to think. Time to enjoy. I could have taken the scooter, but somehow I was drawn by wanting to get the exercise. Don't know why. Don't care either. And that is part of the issue.

So don't be surprised to see some changes on this blog, maybe even a new name.

I am not abandoning the original purpose of the blog, just hoping to add to it in a way I hope is interesting to readers. But remember, this blog was always an extension of me, my interests, my experiences. In a way it is just as much for me as it is for my readers.

I have changed. The blog will too.

Life is too short.

Back to this mornings ride:

I encountered a woman working on a small public garden near the bike path. I wondered why she was there on a Sunday morning. She didn't look like a city employee, no uniform, but could have been, I guess. She seemed to work diligently and I thought how neat it would be if she was just volunteering her time. I don't know, and won't ever know, but I can imagine the possibility.

At another location on the path I saw a woman with a small child in a stroller. As I approached, I waved at the child and said Hi. I could hear the child jabbering a bunch of nonsensical utterances, which sounded pretty funny. Mom didn't say anything, but had a huge smile on her face. I was having a nice morning outing, she and her child obviously were too.

Then as I approached home, I was a little tired and just leisurely riding along. Another bicyclist approached from the opposite direction at a much faster rare of speed. Sort of instinctively I just extended my left arm and gave her a "wave", you know, a motorcyclists type of wave. I chuckled as I did it thinking I'm not sure if I have ever waved like that to a fellow bicyclist before. But it worked. She nodded her head at me and simply said "Hey!"

There may be some changes coming, but they'll be "Premeditated". 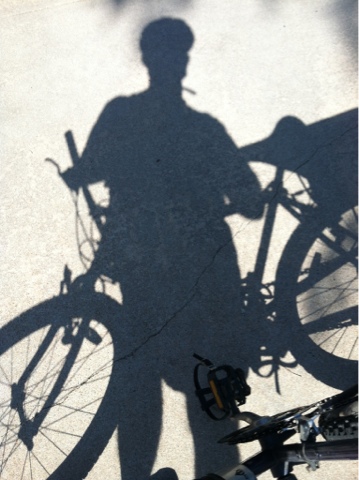