This is an intersection that I travel through almost everyday when I ride to work. We have also lived near here for close to 30 years and we have seen many changes over time. Some changes for the better. Some, not so much. The northwest corner has a rather new and large convenience store. I get gas here often because it is on the way to work and convenient. Many years ago there was a gas station here as well, but it was more of the type you would have seen 50 years ago. Just sold gasoline and had a bay for minor repairs. Eventually that service station became a tire store before that was eventually torn down and the convenience store was built. 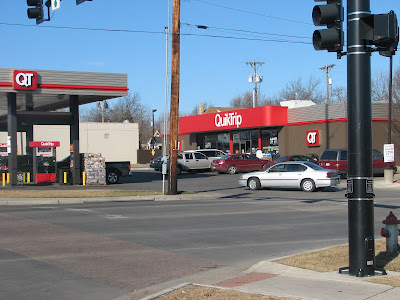 A little further down the street you can see a strip center. These are all over the place and this area is no exception. There is a restaurant, a jewelry store, a cookie store and a fish store. Ahhh, Progress! 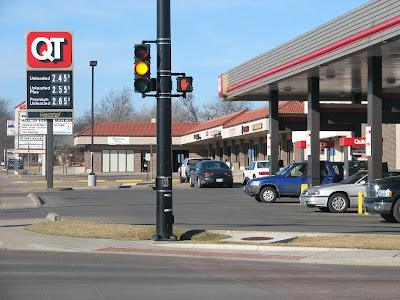 Just on the north side of the convenience store is another building that has housed many things over the years. Originally it was a smaller convenience store. Then a client of mine, who was sort of semi-retired, but who had a dream of owning a coin and stamp collecting shop, rented this place for many years. Some years he did pretty well, some he just got by, but he loved his hobby and spent many years running the coin shop. He was a great guy and I always enjoyed working with him. He has long since passed away, but I still remember him fondly as I pass by the place. 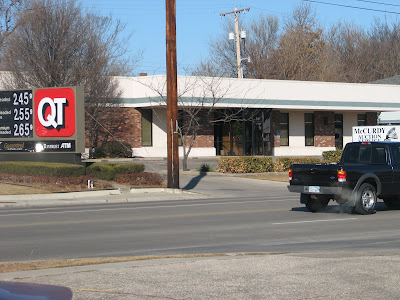 The northeast corner has a lot of history to it as well. For now it consists of a vacant building (which I failed to get a picture of) that used to be a liquor store. It was operated for many years by a couple that we got to know a little bit. The husband passed away and his wife operated the store for many years. As liquor stores go, it was fantastic. They had a lot of very fine wines in addition to the normal liquor store fare. They were always good about making suggestions for wines to go with certain foods and for certain occasions. The wife eventually sold the store to one of the employees. But eventually that person had a sick older relative in another state that they needed to go care for. The store has been vacant ever since. There was also a small movie theatre on this corner. In its day it was quite the place. It didn't survive the industry's gravitation to multiple screen complexes and eventually closed. For many years there was a restaurant in the front part of the theatre. It was called Dr Redbirds Medicinal Inn. They had great and unique sandwiches. One of the first video rental stores in town opened up later in the main portion of the theatre building. Remember renting VHS tapes? They were there for many years until a Blockbuster Video opened up about a mile away. The local store couldn't survive the competition with the big chain store nearby. The theatre building has since been demolished, and the area is essentially vacant land, except for the new Burger King. Ahhh, Progress! A new place where you can get way more calories than you need in one sitting. I noticed this car for sale on the corner. Sign says it runs good. It was a bit ironic to me because this how I sold my car a couple of years ago, albeit at a different location. Place it in a busy or well seen parking lot with a sign on it. Someone eventually saw it and called me. 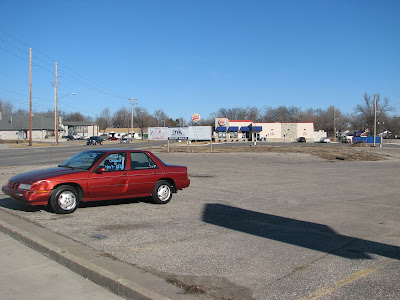 The southwest corner of Central and Oliver has seen many things over time as well. I like to refer to it now as the place where people can be taken advantage of. The building right on the corner houses a furniture, electronics and appliance rental store. It is one of those places where you can buy something and eventually pay 2 or 3 times the amount of money for an item before you completely own it. They prey upon people with bad or no credit. this building was once a dress shop for many years, then a Dollar Store before the rental place moved in. Next to it is a place where you can buy supplies for your swimming pool if you have one. So the place is sort of an area for both high and low income patrons, each getting their desires fulfilled. 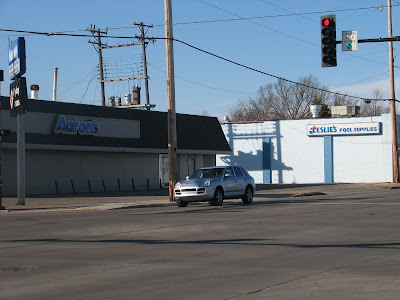 And of course, right south of the rental store is a PayDay Loan company. The ultimate in financial ripoffs. Imagine paying $45 in fees for a $250 loan for two weeks, until next payday. The effective interest rate on that transaction is astronomical. These stores are all over the place now, seemingly at almost every major intersection in town.

One of my clients used to own a couple of these joints, and made some good money doing it until everybody plus their mothers, brothers and sisters opened up similar stores. They seem to thrive on people that don't believe in banks anymore. The bad thing about these places is that once you get one of the loans, many times the person has to do it again 2 weeks later ($45 again) and the cycle repeats itself endlessly. 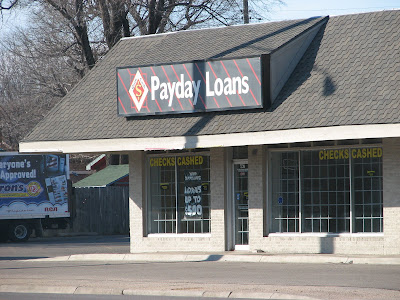 The southeast corner now has a boarded up old grocery store. How I miss that store! The size of it was maybe only 3 times the size of the convenience store on the opposite corner. But what a great store it was in its day. The Dillons chain of stores is prevalent throughout Kansas and is now owned by Kroger but still uses the Dillons name.

We used to refer to this as the little Dillons. We lived just a few blocks from here for many years and used to walk over here to get groceries on occasion. A mile north and a mile east is another Dillons we call the medium Dillons, a larger size but still not huge. Then 2 miles east of the little Dillons is what we refer to as the big Dillons, a store we despise because it is so frigging big. 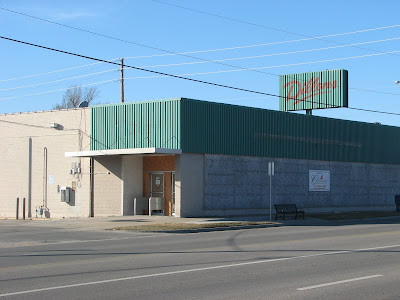 Close to the little Dillons is a little shopping center with a take home to bake pizza place and a bakery/restaurant separated from the old grocery store by only a small parking lot. 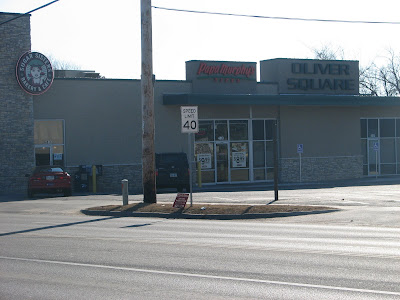 On many mornings as I pass through the intersection, I can smell the wonderful aromas coming from the bakery. One of those things you can see and smell and sense on 2 wheels, but never notice in a car. As I was wandering around with the camera, I notice my reflection in the window of the bakery and felt the need to take a picture. 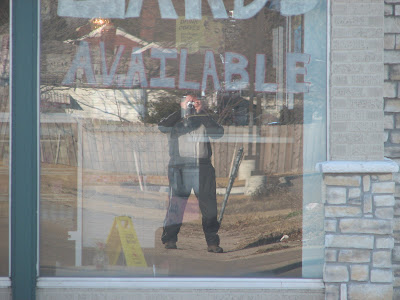 And here is the big Dillons. Damn near everything you want or desire can be found here at this big box grocery store. Not unlike the WalMart Super Centers or the new Super Target stores. Frankly, I can find it very easy to avoid these places. For one thing, the things you need when you go to the store are always at opposite ends of the store, so it becomes a major hiking expedition to visit these places IMHO. 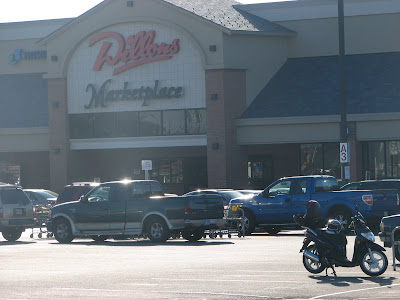 It is hard to see in these pictures how big this place is. There is a new Kroger Finance office here. A recent television advertisement says you can even buy pet health insurance here. I don't even know what pet health insurance is, but can imagine that in most cases it would be a ripoff. Ahhhh, Progress! 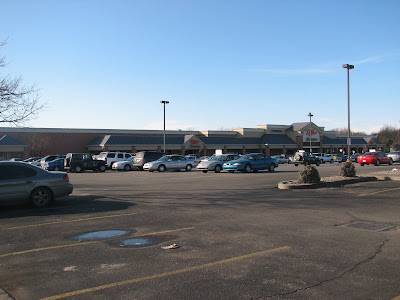 Out in the parking lot to the big Dillons is a restaurant and a Krispy Kreme doughnut shop (factory). Krispy Kreme, I believe, originated in Chicago, but now seems to copy what Starbucks did with coffee for the doughnut industry. The world needs a Krispy Kreme on every corner, don't we? Ahhh Yes, more useless calories. 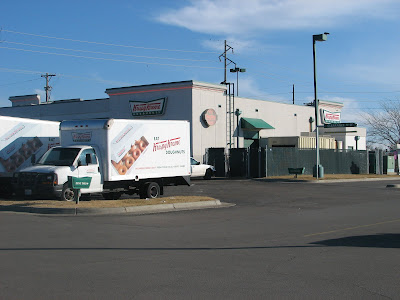 I counted 7 Krispy Kreme trucks in the parking lot. Am I stupid? Is there really that much demand? The store was a bit of a novelty when it first opened up with much fanfare. I haven't been there in a long long time. 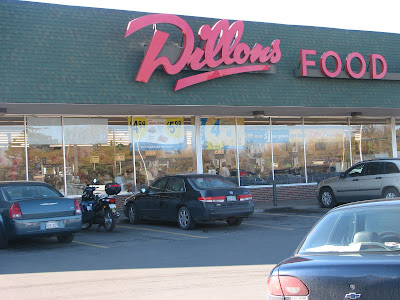 Finally a shot of the medium Dillons, the one where we do most of our grocery shopping. Large enough to carry lots of items, but not requiring all day or concerted physical effort to traverse the store. Max loves the medium Dillons. He has been there many times. Alas, I am not sure I could buy pet health insurnce here.
Ahhh, Progress!
BTW, this is the first post generated and posted from my new Laptop. No small animals were harmed during this process.
Posted by cpa3485 at 3:00 AM