IronDad made a request for any kind of 2 wheeled content from this blog even if not motorcycle or scooter related. So here you go Dude! 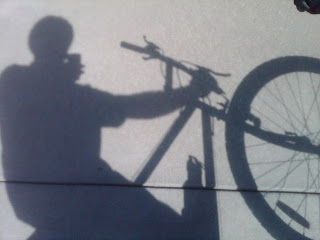 Saturday Morning Shadow on the mountain bike﻿
Been riding a bit lately, just not on the scooter. During the week I had a yearning to explore an old railroad line that had been converted to a bicycle and jogging trail. The rails are gone and replaced with some gravel. Not exactly fantastic for running or road bicycles, but pretty fun on a mountain bike.﻿ 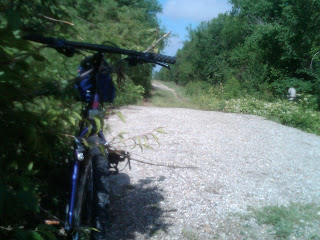 The converted rail trail looking west. This was actually a very small bridge over a creek.﻿
﻿
The rail line had not been in use for maybe 15 or 20 years. About 5-7 years ago, they improved it for trail use. The trail only goes for a few miles, but is nice and relatively pretty. There are lots of abandoned rail lines in Kansas. A national organization called the Rails to Trails Conservancy has been active in converting old rail lines to recreational pathways across the country. They have met a lot of resistance in Kansas for some reason. There is now a trail that goes from east to west across the entire state of Missouri. No such luck here in Kansas. 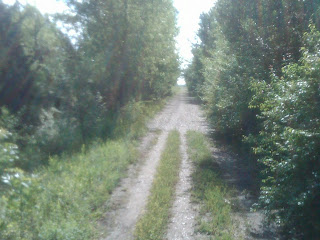 Looking east on the trail. Not much traffic today.
I encountered a couple with a small dog not far from here. I had to laugh as the couple was sort of jogging and walking along and the little guy looked like he was having a great time although he was struggling a bit to keep up with the humans. But you know how dogs are, they'll do anything to make their masters happy. 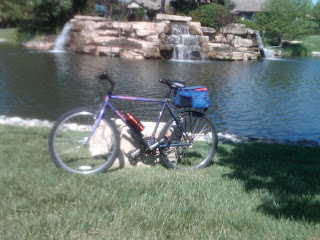 "Bruiser" at the waterfall﻿
I proceeded eventually through a couple of residential neighborhoods, just sort of leisurely riding along. I got passed by a guy on an expensive road bike that looked like he was in a hurry. My initial thought was thet he was trying to be a jerk and just showing off. Then I decided I really didn't give a hoot. I was having too good of a time. 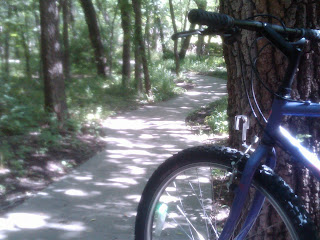 A very shady sidewalk.
My feeble attempt to make this bike ride look sort of look like "Scooter in the Sticks"﻿
Many years ago when our kids were young, we had a trailer for our bicycles and our kids used to ride in the trailer and go along with us for bicycle rides. This neighborhood was a fun place to ride because of the scenery and lack of traffic. At one time we had a tandem bike and with the trailer hooked up to it, it was like riding a semi down the road. 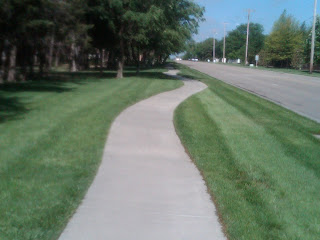 Sidewalk Twisty"s?﻿
It was a beautiful morning and a great ride. Only about a 10 mile ride, but that's really good for me for right now. Small moves, you know.
Posted by cpa3485 at 10:11 AM