I am not sure I even want to know what "Taco in a Bag" is. It sounds ominous. It might be good, then again it might be something you just rent for awhile (if you catch my drift). 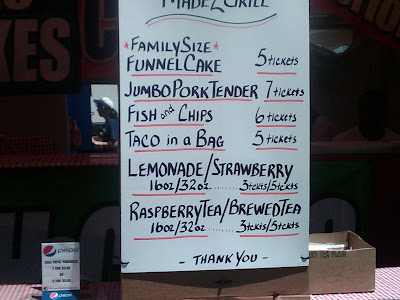 Quite a variety of offerings at this Food Court Vendor

We have this festival every year in May.It runs for 9 days with a parade, concerts, a big fireworks show, and of course, food. One of our favorite events is the Cajun Food Fest. A nice dinner of gumbo, red beans and rice is served up, along with some bread pudding. Later that night a local university jazz band entertains us. 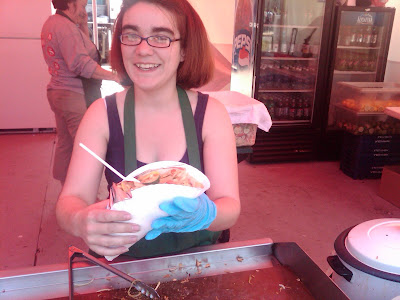 Various vendors serve food from tents near the downtown convention center. Some of the food is really good, some I would think twice about trying. 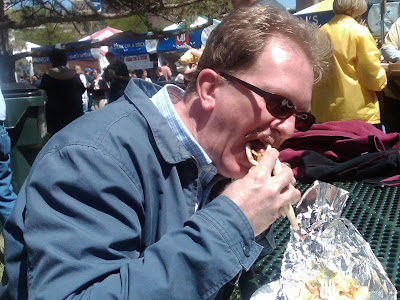 The blog author attempts to tame the beast known as the "Bayou Bonfire" The author said that he would rate it 5 stars out of 5, but then again he is not known for his culinary expertise.

The sandwich was essentially a spicy sausage thing with grilled onions, peppers and okra served in some pita bread.

Cathy, a long time co-worker joined me for lunch , but she opted for a reuben sandwich. 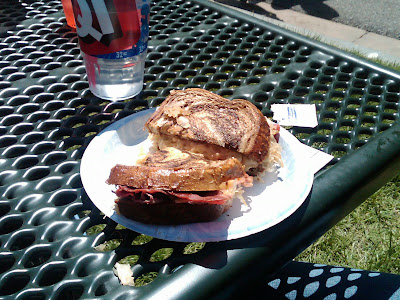 Cathy's reuben before it's eventual demise

Picnic tables are put up near the convention center and it is fun to people watch and try out the food. For people that work downtown, the fesitval gives us a chance to try out some food that is different from the local downtown eateries. 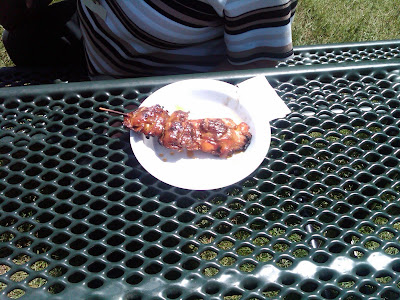 This is the infamous chicken on a stick. This was a sort of sneaky picture of the food purchased by someone sitting near us. No food rating available, but it looked good.
The festival is mostly outdoors and sometimes the weather gets a bit iffy. They are discussing doing the festival in June next year in hope of better weather and other reasons. We actually had tornado warnings on two of the days this year. Oh well, this is Kansas.
There was a seemingly new culinary creation offered up by one of the vendors this year, "Chocolate Bacon". Yeah, you read that right. 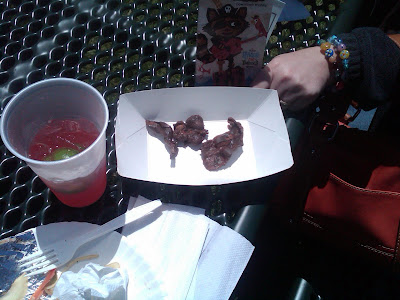 Chocolate bacon is exactly as named. Too bad it isn't worth a damn, but we felt obligated to try it. I suppose in some societies, maybe Canada, it is considered a delicacy. 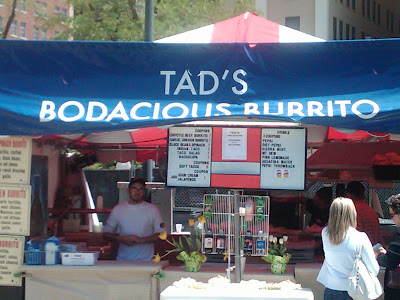 We felt a bit timid, not bodacious enough to try this vendor's food
.
You can get almost all things barbecue here, and its all good, but this vendor is famous for their turkey legs. They seem to be quite popular. 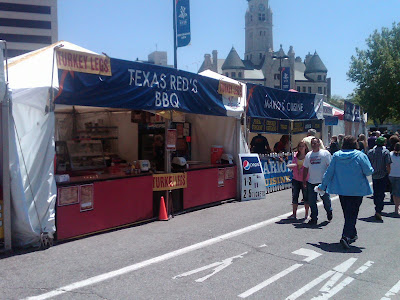 There seemed to be some controversy about the price of the turkey legs this year. Inflationary prices seemed to be greater than the change in the consumer price index. Politicians were blamed. 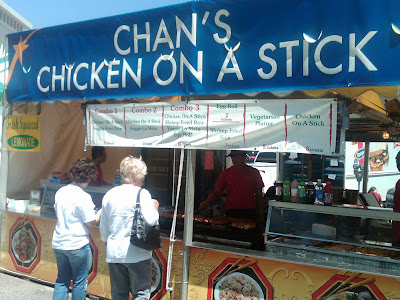 This is the booth where chicken on a stick comes from. It's essentially a teriyaki seasoned piece of breast meat skewered by a wooden stick .
For some reason, whenever the river festival occurs, the funnel cakes come out. The popularity of this so-called "food" escapes me a bit. It's essentially fried pancake batter with various options for sugary fruity toppings. Mucho calories. I've had one before, but it is best shared with friends and family so you don't eat too much of it. Probably very profitable for vendors as I imagine the ingredients cost just a few cents and sell for $3 or so. 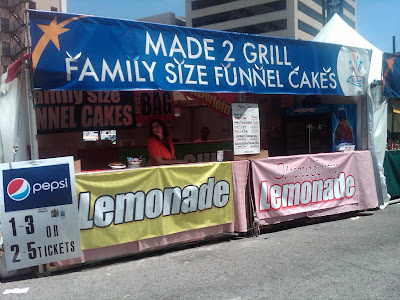 The source of funnel cakes for humanity. Afraid to ask how big the family size one is, or for that matter, why you would need one. .
The theme for the festival was sort of "pirate" related. At one of the souvenier shops Cathy tried on a pirate patch. 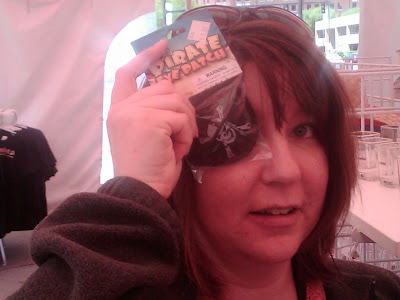 Cathy's attempt at being a pirate,
Arrghh .
Not to be outdone, the blog author tries on a hat. 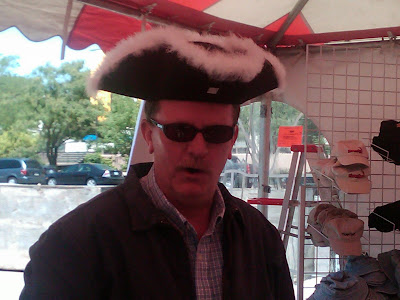 I am not known for wearing hats, much less those with fur on top
.
This button ($5) grants you admission to all of the river festival activities. It is a major portion of the funding for the events. Button police will roam the areas looking for people without the proper credentials and be glad to fix you up with the proper button. 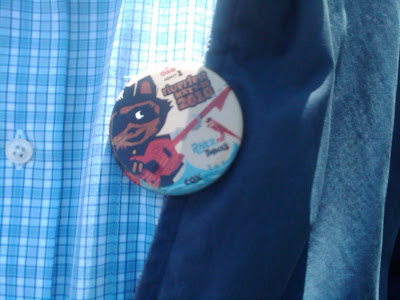 I like to hide my button under my jacket, then "whip it out" when asked for proof of my contribution to the festival
. Near the souvenier stand we ran across this rather large box with unusual lettering. 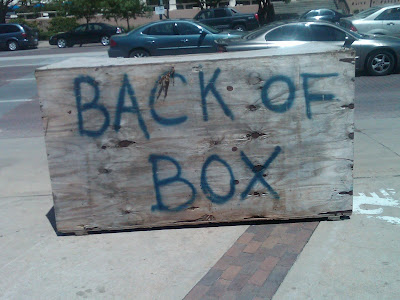 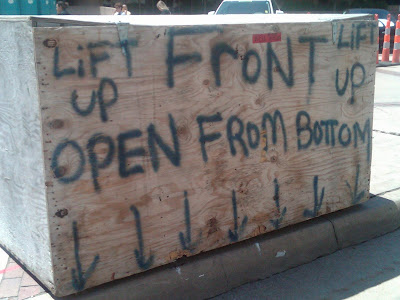 Man, that's a lot of instructions .
People watching can be enjoyable. There was a little bluegrass concert going on near the food court. And a juggler. 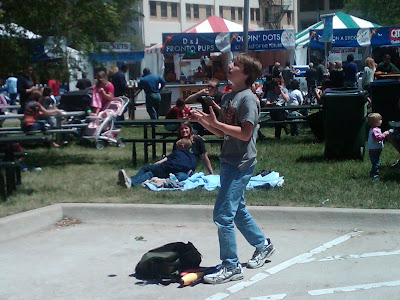 Juggling balls at the food court 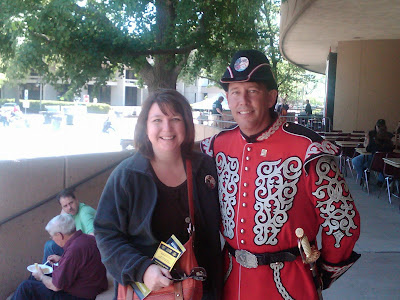 Cathy gets her picture taken with Admiral Windwagon Smith, the ceremonial host of the festival .
Not to be outdone the author gets his picture too. 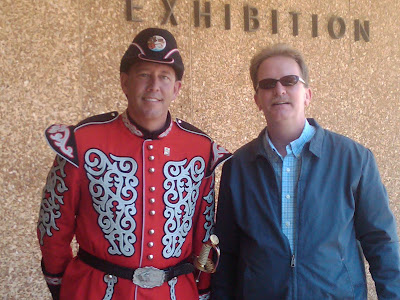 The blog author and the admiral. (I didn't let him put his arm around me). His uniform is made by a company here in Wichita that manufactures band uniforms for schools all over the known universe.
.
At the Cajun Food Fest, my son (right) and Cathy's husband (left)are entertained by a crustacean. 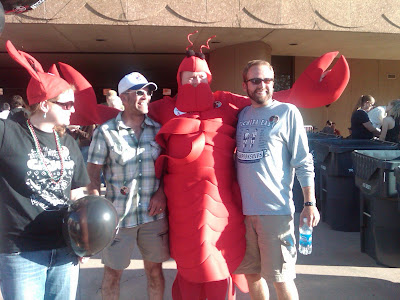 Crawdad? Lobster? I'm not sure, but you don't see this kind of thing everyday .
A concern I have about the future of humanity is the apparent proliferation of pink crocs. This crustacean had a faded red pair on. Not exactly pink, but worrisome. 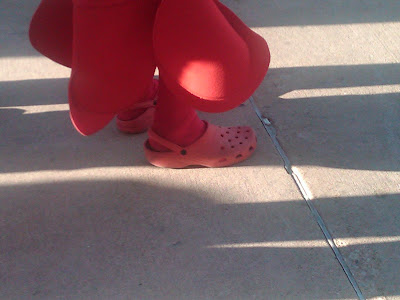