Max Gets to Cavort with the "Leading Ladies" Max at the border
Look at how much worse the road gets when you cross over the line
Do you ever get those wild hair ideas?
A few days before this trip, my wife looks at me with a very skeptical look on her face and says: "OK, you're telling me you want to ride your scooter to somewhere in Nebraska, you don't even know exactly where, or when, and meet up with a guy (from England) you don't even know who says he is touring the USA on a Harley Davidson?"

She says: "How can I believe this? You could be going anywhere to meet anybody and I would never know."

She had a point there.

She asked where I was going. I said either Lincoln or Grand Island Nebraska depending on where Gary wanted to stop for the night. They were both about the same distance, both almost straight north of Wichita, Lincoln a bit to the east. Grand Island a bit to the west.

I said I will leave either Thursday, Friday or Saturday depending on when Gary made it to Nebraska and what city he decides to stop at. I will ride back the next day.

She didn't say it, but the look on her face was like "You Gotta be Fuckin' Kidding Me"

We had just had 6 days in a row of 100 degree temperatures. I really didn't want to spend 7-8 hours on the road with that kind of heat. Two days before I left the rain forecast also looked bad, the only benefit to that was that it was supposed to cool off a bit. Highs in the low 90's never sounded so good.

I said: "If the weather doesn't cooperate, I'll take the famous Canadian Subaru"

She said: "Uh huh", again with that look on her face.

Bottom Line? I am going to owe her for a long time for this little stunt.

But, the weather cooled off, the rain didn't materialize and Thursday morning I left the house at 6:00 am headed north. I had close to 300 miles to go so I didn't stop too many times to take pictures.

Gary and I had been emailing eact other with plans for almost two weeks. I didn't want to mess up his plans, but he seemed very interested in the idea of meeting up with me. He had provided me with the name of the hotel where he was staying and the approximate location. He sent me a link to their website, but it didn't work on my phone. Nevertheless, I was sort of familiar with Lincoln having been there a few times before. And I changed my route a little bit as I came into town hoping I might just stumble on to the hotel. I looked up and there it was on my right.

Gary's bike was easy to identify. I wondered if his bike wouldn't mind sharing a space with a scooter. 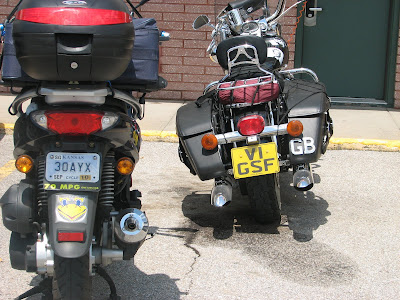 Max was a little timid at first. He's just a little guy compared to the almost Amazonian size and configuration of the "Leading Ladies" (Gary's bike)
Max and I got to admiring the ladies themselves. 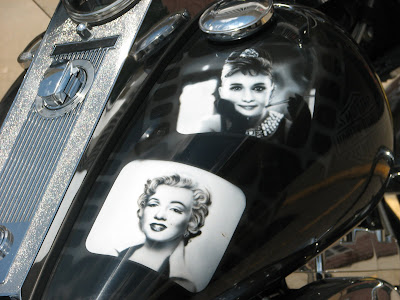 After leaving Max and the Leading Ladies together to get acquainted, I went to see if they had another room at the hotel. They did, and as I was paying up for the night, I saw this guy walk into the lobby and knew right away it was Gary. 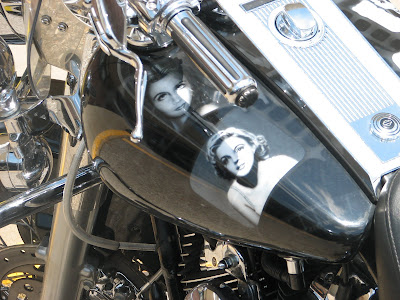 More of the "Ladies" on Gary's Road King
I checked out my room. I thought I would be tired from the ride, but felt surprisingly energetic. I got cooled off a bit and went over to Gary's room. Lincoln is the capital city of Nebraska and the home of the university of Nebraska. He had some potential activities for us for the rest of the day (It still wasn't 3:00 yet). They all sounded good and we decided to get on the bikes and go to a museum that had race cars and "speed related" stuff.
Okay, now Max is really excited! He not only gets to meet the Leading Ladies, he now gets to go for a ride with them. Almost like a date! If he played his cards right...... then maybe later....... 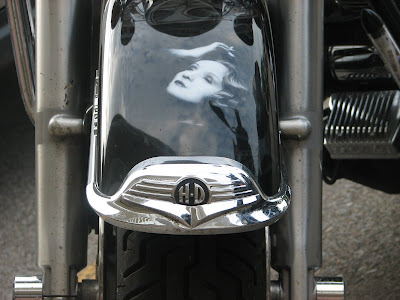 The paint on this bike is beautiful

We took off for the nuseum. Gary has all the "gadgets" and he punched the address into the GPS and after a short struggle we found the museum. We discovered it was closed though and only available for guided tours, the last of which was at 2:00. Oh well. Then we decided to go look at the state capitol building and the university which are relatively close to each other. Gary punches new information into the GPS and we take off. 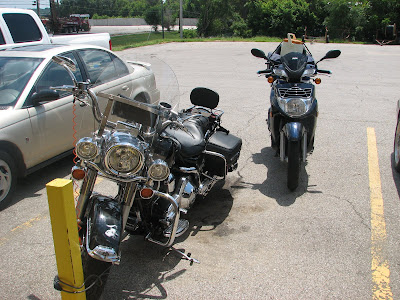 Max and his new friend sharing a space.
We find appropriate parking at the university after we had spent a few minutes at the capitol.
Gary was telling me about motorcycle parking in England. It's apparently usually free, but some people want to use the spaces for cars and charge for parking. A revolution is possible. 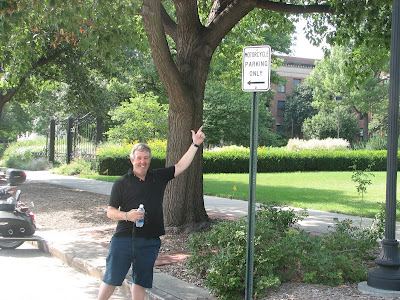 Gary was curious about fraternities and sororities. We talked about the differences in the education systems in England and the United States. He wanted to know what was good about the University of Nebraska, or what they specialized in. My answer was "They are good at Football". I was only partially kidding. Nebraska has a good school, but football is very very important to people "up" here.
There's an old joke about the Nebraska football helmets, which are white with a red letter"N" on the sides.
The question is, "What does the "N" stand for?
The answer is "Nollege" (Knowledge) We walked around he campus a bit and took a couple of pictures. 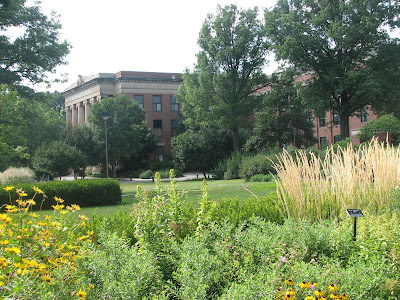 It's a nice looking campus
I had about a zillion questions for Gary. As we walked around Iasked questions like How he had organized the ride? How long he had been planning? What did his wife think of all this? I tried to get all my questions answered and Gary was very cooperative about answering them. I hoped I hadn't asked the same questions he had already answered before and repetitively, but probably so.
All in a British accent of course. I did forget to ask him whether he loved the Queen. 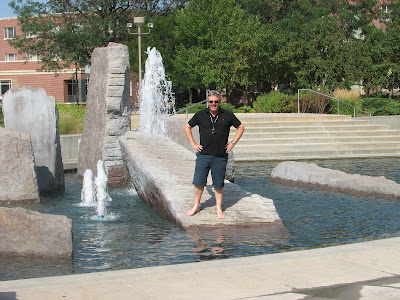 Gary waded into the center of this fountain
We walked and talked and eventually got a bit hungry. I had stopped in Fairbury Nebraska for a McDonalds Value Meal, only because it was quick and easy. The salt content seemed to be enough to clear the streets of Philadelphia from snow. I needed some good food and we located a noodle restaurant that turned out to be very good.
Isn't 7 a lucky number? 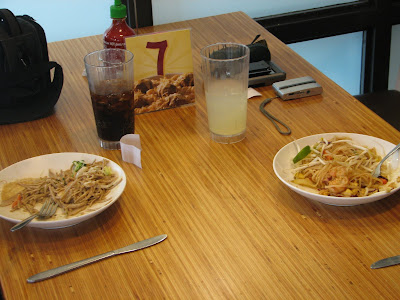 Good food and more good conversation
After eating we wandered around a bit more and eventually decieded to ride some more to a couple of area parks. Gary punched the information into the GPS and we took off again. It was a comfortable evening. 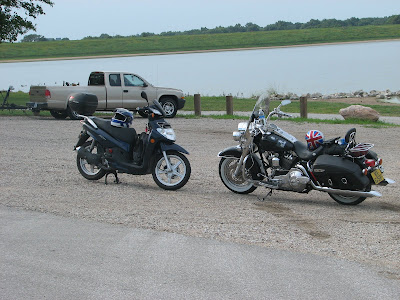 Max and the Leading Ladies chatting it up by the lake
Gary and I talked about many things. Told many stories. Eventully we decided to go to another park. When we got there, we saw these two low riders and Gary wanted to get off and talk with the owners. 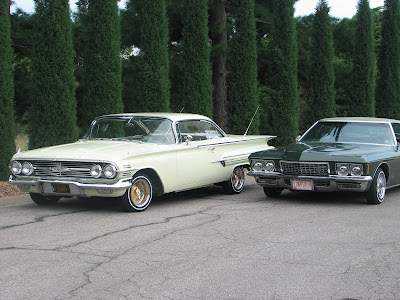 We had seen a 747 flying in the sky as we were riding. This park was directly south of the Lincoln airport. But then we noticed that the plane was "Air Force One". Gary got a better picture than I did. 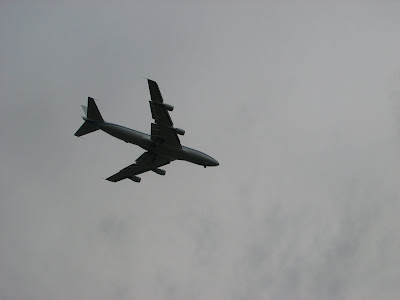 The plane flew over us 4 times, maybe doing touch and go's at the airport

I had been very interested in Gary's trip since I first learned about it earlier this year. To me it would be like a "dream" trip to take. He's taking over 5 months to do this. Maybe traveling 150 miles a day. Stopping to see things along the way when he wants to or feels like it. He's generally not tied down to being certain places on specific dates. Can it get any better?

I asked him if he was really retired. He's only a couple of years older than me. He is fully retired, but I suspect he still stays a little "involved" in some things.

But can you imagine a better opportunity to see the country? Staying in the northern part of the nation during the summer, then visiting the southwest part of the USA in the fall. He has already seen many things I will probably never see in my life.

At times on his tour so far, he had other riders to ride with. Some are old friends and business associates. So not all of his travel has been solo, but a lot will be. He has already ridden with another blogger, Chris Luhman of Everyday Riding fame. He may also ride with yet another blogger after meeting me in Lincoln. I won't give it away who that might be for now. 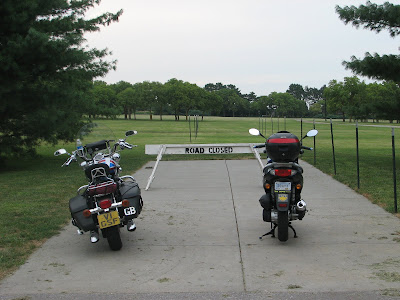 Max and the Leading Ladies at Pioneer Park, near Lincoln

He mentioned to me after this shot that it might be getting close to "Beer O'Clock"! We rode back to the hotel and locked up the bikes and eventually headed across the street to a little bar to get a beer, or two, or three, or.....................

We talked a lot more about many things, generally harassed the waitresses, laughed and had a good time.

But it was getting to be 10:00 or so, I had had a long day, and we were both ready for a little "shut eye". So we went back across the street and went to bed. Not sure what Max and the Leading Ladies did that night as we slept, but "What happens in Lincoln, will stay in Lincoln". We met again for breakfast in the morning and had a decent breakfast. He was riding west and north with a relatively long day for him. In a few days he plans to be in Sturgis. They apparently have some sort of rally each year out there (grin). I was headed back south toward home. 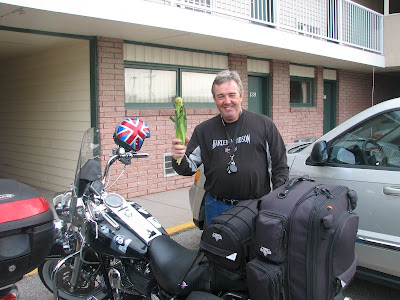 Gary is very proud of this ear of corn he picked up a day or two before Lincoln. You can see how well organized his bike is.

We only spent a few hours together, but the experience for me was very enjoyable. Maybe part of my reason for even trying to meet him was to somehow share in the dream that he is able to be "living out".

Gary, thanks for the opportunity to meet you. Take Care , Ride Safe, and Have a Blast.

I know a bunch of us will be following your blog and wondering what you might be up to, as well as wishing it could be us living the "dream".