The First Air Force One

The monthly ride for the local scooter club, "The Wichita Twisters" happened on August 1. It was hotter than Hades. We had 13 or 14 people show up on various types of scooters from 50cc to 650cc. A few new people showed up as well. Pretty good turn out for such a hot day.

The ride this month was aircraft related. Wichita is famous for the manufacture of aircraft. Boeing, Cessna, Beech and LearJet all have plants here. McConnell Air Force Base sits near the southeast part of town where the old airport used to be. A newer airport now sits near the southwest part of town. Boeing has a large facility on the opposite side of the runway at the air force base. They do a lot of defense related work as well as commercial aircraft work. The Beech plant is on the east side of town with its own runways. Cessna and LearJet are near the newer airport.

I wasn't even aware of the history of "Air Force One". Near the downtown area, there is a display of the first plane designated as "Air Force One". The plane was manufactured in 1937 by Beech Aircraft Corporation and is now on display. I didn't even know this plane was on display here and was glad to learn where it was as we rode. 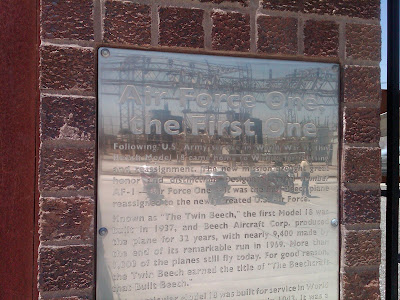 The sign is hard to read, by picture or otherwise, but describes the history of this plane.

They erected a monstrous fence in front of the display that made a good picture somewhat difficult. I guess they don't want any vandalism. For the day, these were pretty advanced planes and the Beech twin engine planes are famous for speed. 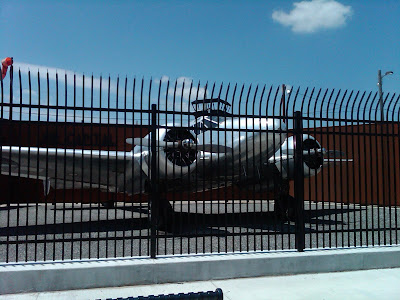 The Beechcraft "Air Force One" , the first one. 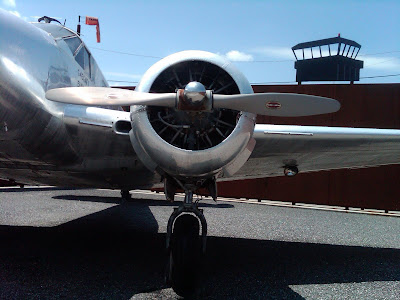 A shot through the fence of the radial engine
From there on, we rode to the east side of town toward the Boeing facility and the air force base. The old airport building has now been converted into an aircraft museum. Our next stop was to visit this museum and see some of the planes on display there. On the tarmac there is a Boeing B-52, and old Boeing 727 (Fed Ex plane), a LearJet, a Beech Starship, an older Boeing 707 converted to a refueling tanker, and various other planes. Many are very impressive.
Inside the building are many displays of even older aircraft and engines. It is quite interesting. Many early airplane pioneers set up shop in Wichita, and Wichita's growth as a city was largely dependent on this industry. 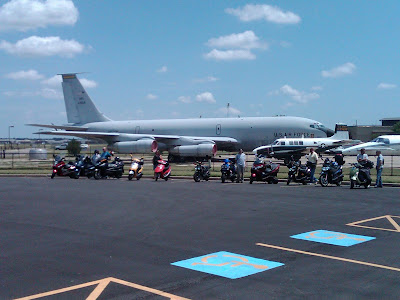 A Boeing 707 tanker with a bunch of scooters in front
The airplane industry took a major hit when the economy collapsed in 2008. There were thousands of people laid off. It seems to be recovering a bit, but slowly and the unions argue that much work has bent sent overseas to benefit from cheaper labor. After WW II, through the early 70's though, the industry was booming. Cessna, Beech and Learjet now produce luxury jet aircraft while still maintaining a business for propellor driven planes. 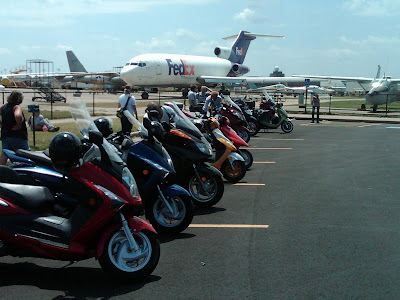 More scooters in front of an old Boeing 727 once used by Fed Ex.
The Boeing plant here is huge and does a lot of defense related work. It is convenient for them to have the air force base on the opposite side of the runway. We occasionally see all types of aircraft in the skies here. It is not unusual to see AWACS planes and other significantly modified aircraft.
Boeing also produces the front portion of the new "Dreamliner" which is then shipped by rail to Everett Washington for assembly. 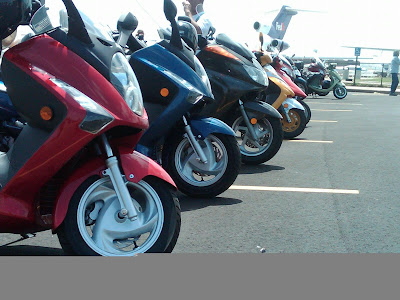 Another "lineup" of scooters.

At the end of our ride we rode out to the new airport and ended up at this steakhouse for iced tea and soft drinks. It was a hot ride, but a fun one. 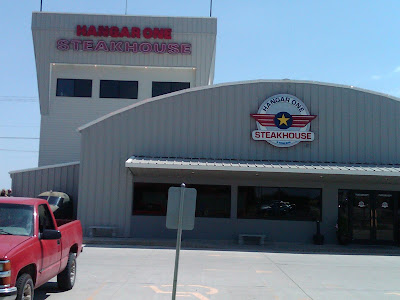 The destination for cooling off and getting liquid sustenance.