Missouri & The Gateway to Hell (Part 1)

Part One: The Enemy, Missouri Sports rivalries are important to some people. I attended college at the University of Kansas, in Lawrence Kansas. KU is a member of the Big 12 athletic conference. You may have heard of us. We won the national championship in Men's basketball recently. I am also fairly loyal to many of the other schools in the conference as long as they are not playing KU. But there is one school in the Big 12 that I find it personally very difficult to root for, and that school is Missouri. 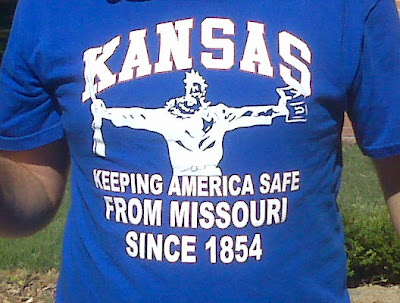 Now rivalries can be taken to extremes sometimes, most are friendly rivalries, but KU's rivalry with Missouri actually has some significant historical context to it. And realize it or not, that history between the 2 states played a major role in the start of the civil war back in the 1860's.

This is a photo of a painting hanging at the state capitol in Topeka. It is John Brown, a noted abolitionist, depicted as a warrior for the cause of freedom. 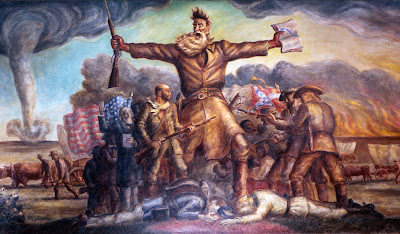 Kansas became a state in January of 1861, the civil war commenced about 3 months later. But for Kansas, the battle over the legality of slavery commenced about 8 years earlier and was largely a battle with, you guessed it, Missouri.

Missouri was a "slave state" and many Missourians wanted Kansas to be a "slave state" also. Many new settlers moved into Kansas from various parts of the country during the 1850's. In Kansas, the population was split (pro or anti slavery) and there was actually 2 cities vying to become the state capitol, one pro-slavery, the other anti-slavery. Lawrence, where KU is located, was an important community for so-called free-staters (anti slavery).

Kansas was eventually admitted to the union as a free state, but the process was not easy and at times became very bloody.

Here's a link for a brief discussion of those days.

Two very colorful people were part of this history. One was John Brown. 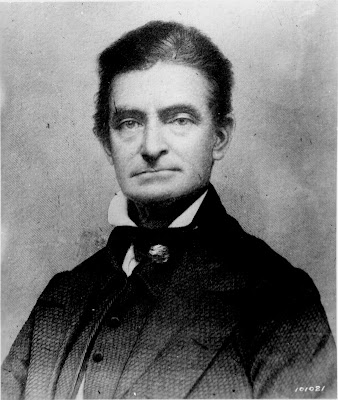 And here is a link for information on him.

The other was William Quantrill, a pro slavery advocate. 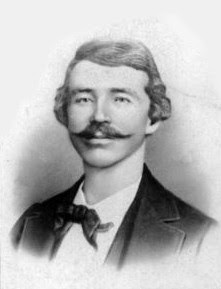 And here is a link for more information.

http://en.wikipedia.org/wiki/Quantrill,_William
Both Brown and Quantrill were noted for their ruthlessness and strong beliefs even though they were on opposite sides ideologically. They also never encountered the other directly in any battle, but both were recognzed as significant leaders of their respective causes. Neither the free state supporters (Jayhawkers), nor the slave state supporters were innocent in all these proceedings. There were many atrocities committed by both sides. It was guerrilla warfare at its ugliest with raids in both Kansas and Missouri where cities were burned and innocent citizens slaughtered.
Brown was famous for a raid he led at Osawatomie, Kansas. But probably the most famous raid was orchestrated by Quantrill at Lawrence (home of my Alma Mater) in 1863.
Here's more information about that event.
Quantrill raid link:
http://en.wikipedia.org/wiki/Lawrence_Massacre
.
Part of the time I lived in Lawrence, I lived in a house that stood when the raid by Quantrill occurred. The house was one that survived the raid. I rented it with a couple of other buddies. It was a good party house in the older section of town. We also, of course, studied on occasion.
To me it is hard to believe in a cause so strongly, that you would be willing to do almost anything to advance the cause, even including the murder of innocent people. Brown and Quantrill are examples of those kind of people, yet they are in some ways renowned for their efforts no matter how cruel they were.
Now the sports rivalry with Missouri is generally friendly, but certain events have occurred over the years.
A basketball player from Kansas reportedly stepped on a Missouri players chest during a game in the 50's.
A former male cheerleader from Kansas told me a story about being somewhat afraid for his life after a football game in the early 60's. Kansas had beaten Missouri on Missouri's field in a year when Missouri was nationally ranked. For their safety, Kansas female cheerleaders were sent home at halftime. The male cheerleaders and other Kansas people were escorted off the field by the football team and some police after the game while the angry crowd pelted them with garbage.
I myself had some things thrown at me one year when I attended a football game at Missouri as a member of the KU pep band.
The rivalry is very strong for people that live in the Kansas City area because many graduates from both schools live there. 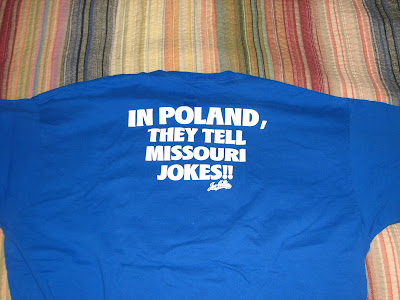 Nowadays the rivalry takes on a friendy but sometimes mischevious perspective. Fraternities and other groups play pranks on each other during the week of a big game. All for fun and usually silly.
But I guarantee you that Kansas people remember these historical events. And the Missouri people remember them as well.
Do you think we Jayhawks will forget the historical events that led up to the creation of this rivalry?
Not on your life!!!
Go Hawks!!
.
.
.
Note: Part 2, The Gateway to Hell, will be posted on 10/27/09.
Posted by cpa3485 at 3:00 AM