The immediate family members have always done something very nice for me for Fathers Day. This year my son had to leave on Sunday for a trip to a conference in Dallas so we got together on Saturday night for a barbecue dinner at my son's house. We had a great dinner of chicken breasts, salad, fruit and Laura (son's significant friend) made a Key Lime pie for dessert. My daughter and her fiance were going to meet up with his father on Fathers Day, so Sunday was going to be a day with just Jayna and I. I was looking forward to a relaxing day alone with my wife after a very busy week. I was also hoping to go for a short ride sometime on Sunday, but the house needed cleaning and there was some yard work to do. Then my wife said that she would clean the house Sunday morning, while I was gone, if I wanted to go for a ride. I gave a measly sort of protest about it not being fair for her to stay home and clean the house while I went out to have fun. She firmly insisted that I go. I couldn't make her change her mind. (Then again, maybe I didn't try real hard, or maybe she is not impressed with how I clean.) I left the house about 8:30am. It was one of those days where I had no real plan as to where to ride. And I love a ride like that. So many rides are for a particular purpose. I thought I would head south first on Greenwich road, a section line road just east of town. I ran into some road construction and turned east for a few miles. I decided to turn south again on Andover Road. My makeshift plan was to see how far I could take this road before it turned into dirt. I discovered that Andover Road, the main street in Andover Kansas, eventually became renamed as Butler Road as I got further away from the city of Andover. Butler is the county and I wondered as I rode how the road ended up with two names depending on where you were. Then again, who cares. As I rode along I thought about what a great family I have and how lucky I am. My wife is the best, of course. My kids (28 and 23) are both out of college and gainfully employed as teachers. They each have really neat significant others in their lives and I really couldn't be prouder of them. It was a hot and humid day as I continued south. The first town I came to was Rose Hill. Not sure where the town got its name. Saw some roses but someone would have to show me where the hill is. They have a new high school there and it is a nice little community. I know people that live here and commute to Wichita every day. As I ride south from Rose Hill it looks like the road might dead end at K-15, a state highway, but the road just jogged over a bit and I continued on to the town of Udall. I stopped here to get a couple of pictures. 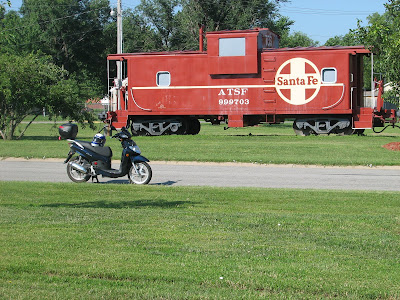 ATSF stands for Atchison, Topeka and Santa Fe
Udall has some notoriety for having been almost completely destroyed by a huge tornado in 1955. Jayna's father was a newspaper reporter for the Wichita newspaper at the time and was one of the first people into Udall after the tornado hit. Having some scary experience with tornados myself, I took a moment to look at a small memorial for the victims of the tornado in the park adjacent to the caboose. 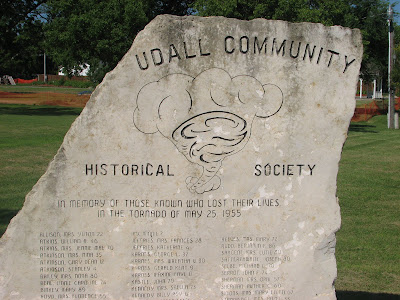 A rather somber memorial. The names continued on down to the bottom of the rock.
I decide to go west from here after seeing that Butler (Andover) Road had apparently ended. There was a sign saying that Belle Plaine was 9 miles away. I always thought that "Belle Plaine" was a nice name for a town.
About nine minutes later I rode in. I have been there before, but don't recall entering town from the east side. It's amazing how your memory of a town is dependent on what you see by the direction you come in. It was pretty in the morning sun.
Belle Plaine has a beautiful little nature conservancy known as the Bartlett Arboretum. Beautiful flowers and trees abound. You can take a walk over footbridges and paths inside the park while being surrounded by beautiful plantlife. One of those little known and out of the way gems of the world.
I went on westward eventually reaching an intesection with old US 81 that goes north back to Wichita and eventually becomes Broadway Ave in the central and downtown areas of Wichita. 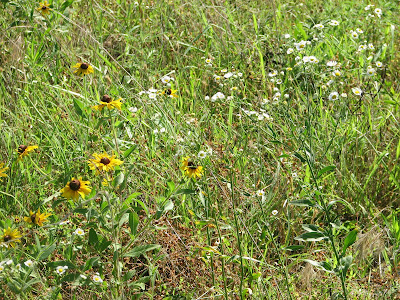 Some sunflowers and other pretties on the side of the road

At the intersection I stopped for a bit to get a drink of water. Took a few pics of some wildfllowers and made a new plan on getting back to Wichita. 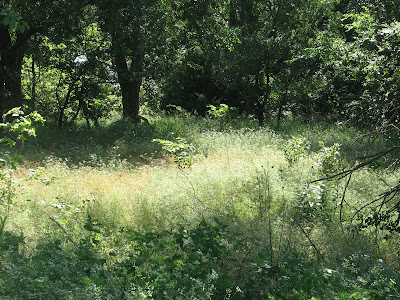 A pretty shot of some sun and shade 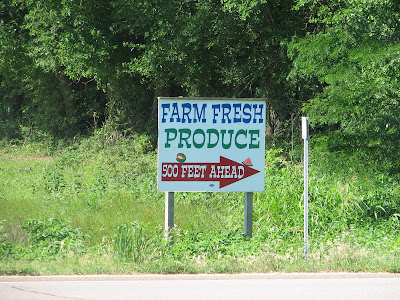 I wasn't going that way this morning, but I bet the produce is good. This is serious farming country

On the southeast part of Wichita was an old (now closed) amusement park known as "Joyland". I though it might be interesting to ride by and see what kind of shape it was in. It was primarily for grade school age children. But there was a rather unique old wooden roller coaster there as well.

I had an acquaintance that said he worked there as a teenager. He said his first duty each day was to "walk" the roller coaster with a couple of wrenches and tighten any bolts that might be loose. He said there were always loose bolts.

It sure appears to be a lonely looking park now. If you listen, you can try to imagine the laughter and screams of children on the various rides when the park was in its hey-day. That was a long time ago. 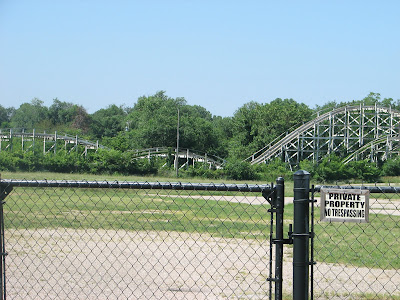 I dared not to trespass. Looks a little overgrown
I am sure it would be very costly to fix up that old roller coaster now. It was never breath-taking with speed or thrills, but was always surprisingly fun with its little creaks and rattles. Nowadays the big amusement parks in Kansas City or Oklahoma City, even Dallas seem to get Wichita's business for amusement parks with their big expensive thrill rides. I only rode on that roller coaster maybe 3 or 4 times in my life, all as an adult, but somehow I miss it. Another bygone era. 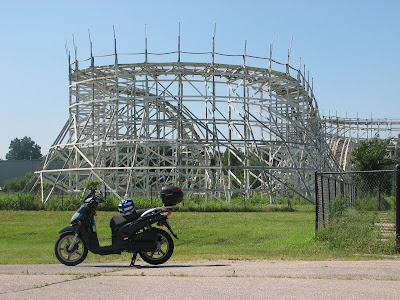 The tallest portion of the old roller coaster. I bet there are a lot of loose bolts now.
I rode on home after that stop and was glad to get out of the heat. Jayna and I watched some World Cup soccer that afternoon and also a rather bad movie starring Clive Owen and Julia Roberts. We took the dogs for a walk later that evening after it cooled off a bit.
What a great day it was.
I am a lucky dude!
Posted by cpa3485 at 3:00 AM