Although Wyatt Earp was once a sheriff here, Wichita is not particularly famous for cowboy shoot-em-ups like Dodge City. But we do have a pretty nice "Cowtown" museum here. This house and the next were early homes in Wichita and were restored and moved to the museum site along the river. 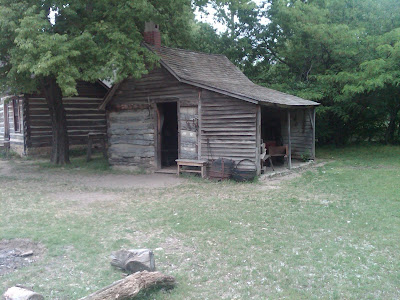 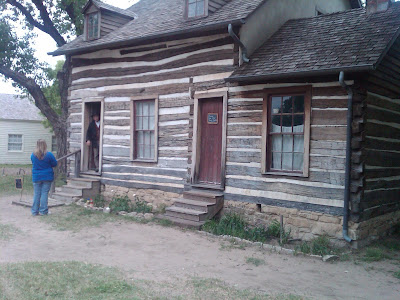 Here's a view down one of the streets. Hollywood movie producers occasionally come here and use the facility to produce a shoot-em-up. 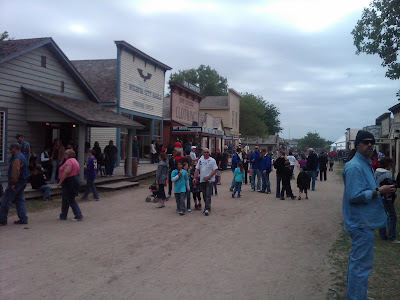 This is a woodworking shop. 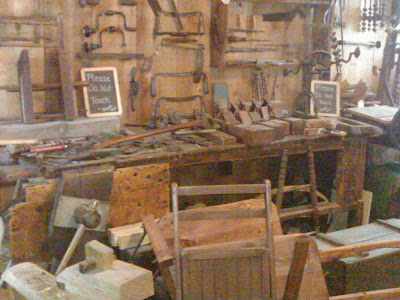 A street musician. He played and sang. Volunteers wear period clothing and are trained to act and dress just like it would have been in the day 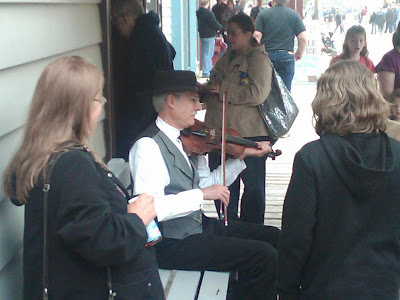 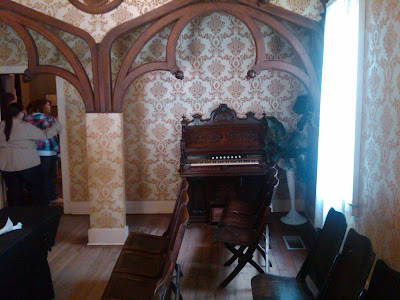 A printer is showing some kids how to operate one of the presses at the local newspaper. 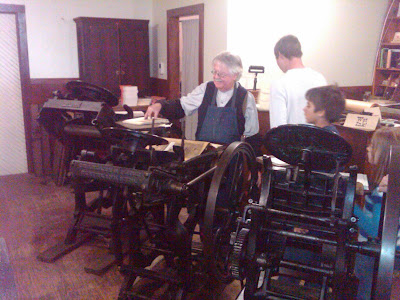 And if you wanted to get a shave and a haircut, this is the place. 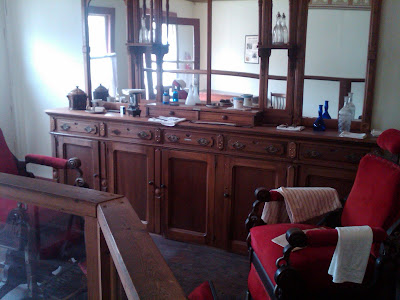 The women are virtuous. This man is lucky to pose with two women. 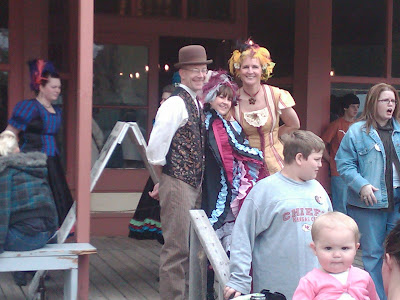 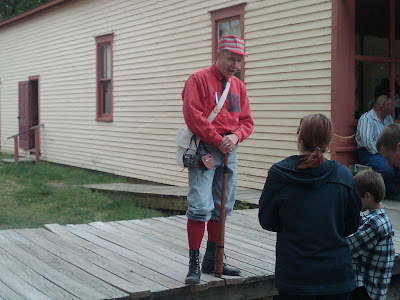 Wichita is currently celebrating it's 39th River Festival. Nine days of fun and frolic with events all over the downtown area. Concerts, exhibits, games abound.
To help celebrate this year's festival, the Cowtown people arranged to have the Budweiser Clydesdales come to town. 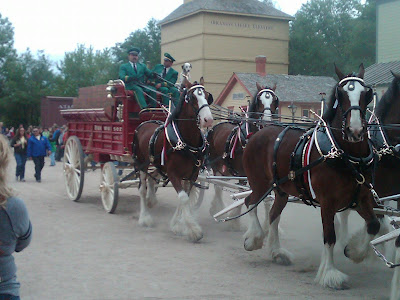 Rooms to let at the local hotel. As Igor (in Young Frankenstein) would say, "Of course the rates have gone up". 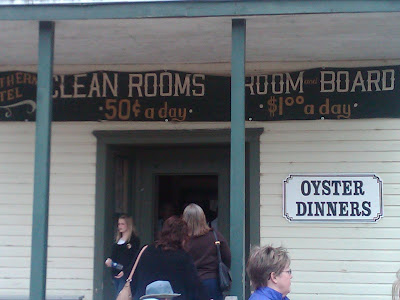 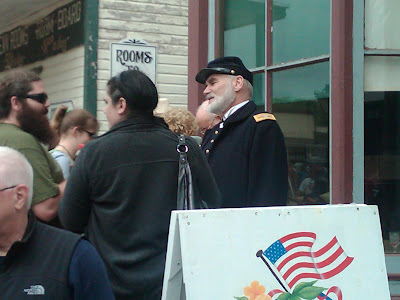 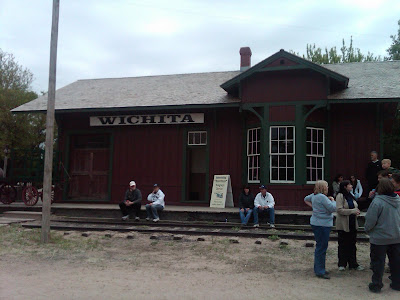 Dance hall girls were putting on a show. They were so popular that I couldn't get closer for a better shot. 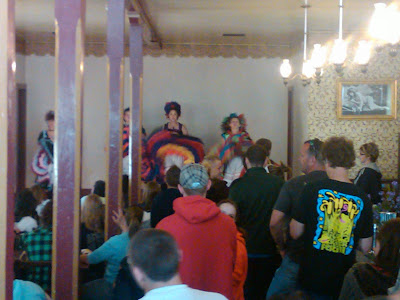 You can take a ride on a covered wagon if you want to. 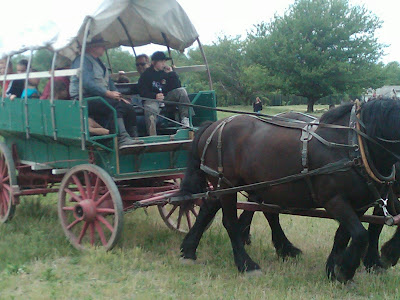 Of course there are the inevitable consequences of having horses around. 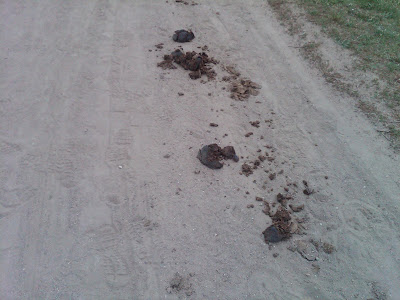 There is a small working farm at the museum, also. They use period equipment to till the fields. 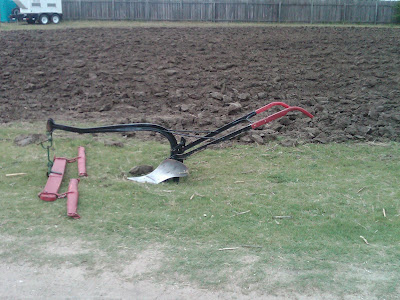 This lady was the homemaker at the farmhouse. There was another lady there at the time that, I thought, was also dressed in period clothing and she had a bluetooth device in her ear. I didn't think that fit in the period very well, and then I realized that she wasn't one of the volunteers. Good thing I didn't take a picture of her. 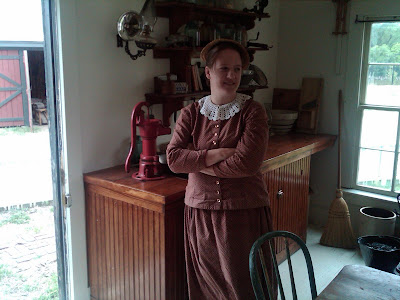 This little guy was out at the stables telling the patrons about the horses. 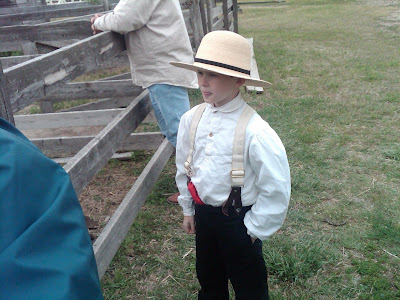 Therse are a couple of ClydesDales benchwarmers. I think they were due to enter the game in the 3rd quarter. A discussion on the porch at one of the homes in town. 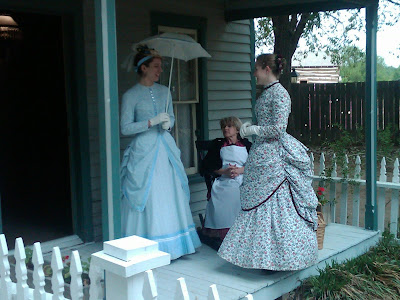 My wife and daughter have volunteered here at Cowtown in the past. On really hot days, all the clothing they have to wear is especially uncomfortable. They recalled many memories of fun.
Here's my wife getting to feed one of the horses. 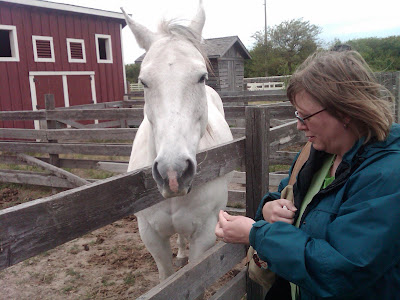 I think it was a great day for Mom. I hope she enjoyed it. The whole family went and had a good time. Here's to my wife, A Fantastic Mom, and to Mothers all over the world!
Posted by cpa3485 at 9:15 AM