Experiencing the Zen of Maintenance

Max was a bit overdue for an oil change. I had always had my dealer perform this little function for me in the past, but decided to do it myself this time In addition, I was goofing around on the web a few days ago. I ended up at the SYM website and to my surprise located a maintenance bulletin for my scooter regarding a problem with the wiring for the horn. The wiring apparently, on my model scooter, had in some cases been shorting out against the base of the radiator and causing one of the main scooter fuses to blow. I wanted to see if I could figure that out as well. More on this later in the post. First, I thought I had better take a peek at the air filter. According to the maintenance table in the handbook, it was due to be replaced soon. I took the cover of the air filter off. The outside of the filter looked like this. 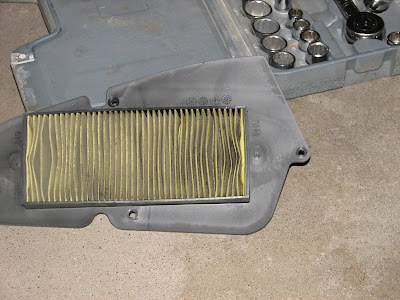 Not very clean. I took my 400 hp Craftsman 16 gallon shop vac to it. Didn't help much. But the inside of the filter looked like this, pretty clean. 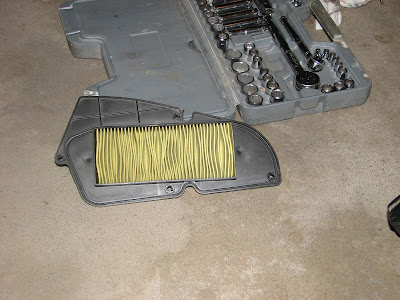 If one side is clean and the other filthy, can you still get by?

I do know the answer to that question. A new one will be on order soon.

This is really the first time that I have ever taken apart anything on the scooter. Now, mind you, I am not a real gearhead in any shape or form, but I used to do a lot of maintenance on cars I have owned in the past. Particularly on the 2 VW buses I used to own, back many years ago.

Doing tune ups, installing new points and condensors, (remember those?) and adjusting valves were not a problem for me. But I have not spent a lot of time really getting to know my scooter. What little work that has needed to be done so far was done by my dealer. But now I am approaching 6,000 miles and a few other maintenance items are recommended such as adjusting valves, flushing the coolant and some other odds and ends. I am thinking that a lot of this I should be able to do. I opened up a cover that covers part of the floor and the front of the engine compartment. You can see the battery and the top of the engine. The engine is a 4 valve 4 stroke. Fairly sophisticated. SYM has made motorcycle and automobile engines for Honda for many years There was really no reason to take this cover off, it just looked like fun. I almost screwed up a bit putting it back on. The 2 screws on the floor were just a bit shorter than the others. I had forgotten that for a monent, but recovered nicely, thank you. You may have heard me say before, but the side stand on Max is virtually useless in my opinion. It makes the scooter lean just a bit too much for my comfort, easy to knock over. I use the center stand almost exclusively. The HD 200 comes with both stands, factory installed at no extra charge. But I discovered that the side stand is perfect for one function. . Draining the oil. 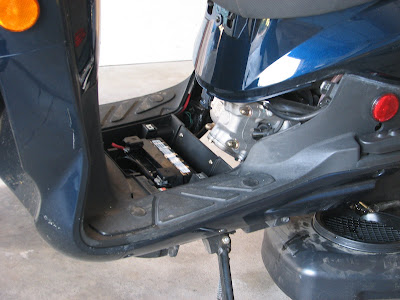 The oil change proceeded smoothly. The old oil was pretty dirty compared to the new oil.

While I was at it I decided to take the seat off and peek into the engine compartment a little more. Six (10mm) bolts later and Wah Lah! The seat is off. 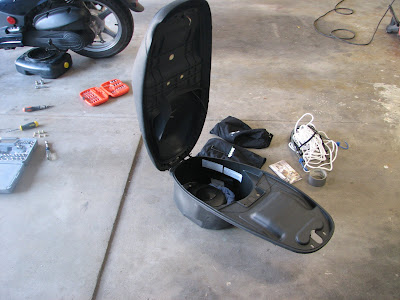 It is pretty easy to take off and here is where the meat of the scooter is. First view is of the top of the engine compartment where the fuses are. 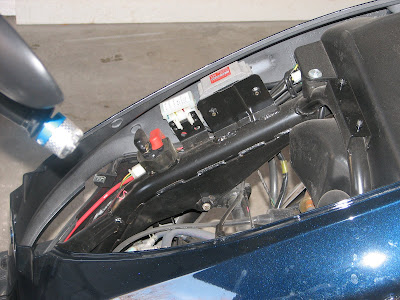 Then looking down at the engine.
.
Some of the stuff is a bit unrecognizable to me. For now. 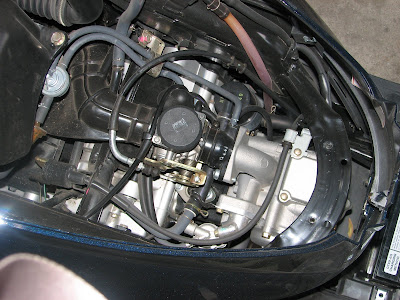 I spent a little time just looking around and trying to identify where different parts are.
.
Then it came time for the real purpose of this little maintenance party.
.
About a month ago, on one of our club rides, I blew a fuse. Had no clue why. Nothing like that had ever happened before to me, in fact, Max has always been completely dependable.
.
But, I noticed that day when the fuse blew, that my horn had not been working.
Then when I found the maintenance bulletin, I really took notice, because it sure sounded like it could have been my problem on that day of the club ride. My horn had not been working recently, and I was a bit fearful of another blown fuse.
.
The bulletin instructed you to look for the position of some wires connected to the horn, and based upon the initial position of the wires, gave you 2 solutions. One solution looked pretty simple, the other a little more complicated, but not bad, just maybe a little more time consuming.
.
As with most instructions, there was not a lot of detail. When I first read it, it sounded a little strange, but assumed that once I got close to the scooter, it might make some more sense. I was ready to try. The first step on the bulletin said to remove the front cover.
.
Just that, nothing else.
.
I knew what front cover they were talking about, but just assumed that they might give me a little better clue as to how to remove it.
.
It was time for Zen.
.
Ommmmmmm
.
Deep breath
.
Take your time, look around a bit.
.
It wasn't completely obvious. 12 bolts later, and undoing the wiring harness to the headlight, I had finally removed the front cover.
Here's what you get. 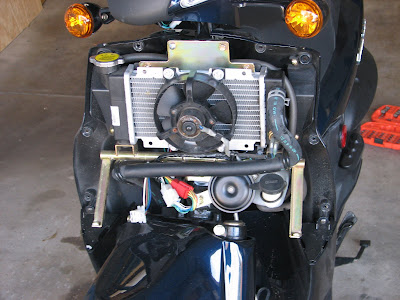 The horn is just beneath the radiator. The wires in question are partially obscured by the radiator hose, but were easily found. According to the bulletin, my solution was the easier of the two procedures to follow up with.
.
Thank Buddha!
. Essentially the solution was to re-arrange the wires that were sort of clipped together in a different fashion so that the horn wires were not on the outside of the bundle.
.
Was pretty easy.
Really not sure why the position of the wires could make such a difference, but that is what they said in the bulletin, and after I got everything back together, IT WORKED! . Here's Max all reassembled. 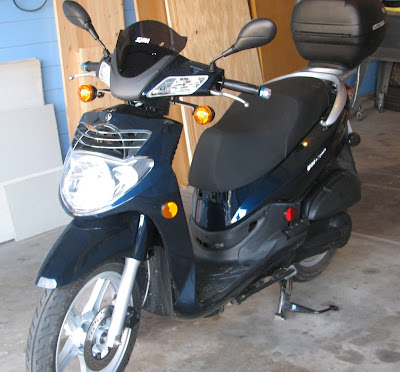 I got all the bolts back in their proper place, in spite of some brief assistance fom one of our cats, who was of the opinion that some of the bolts belonged in a different place on the garage floor.
.
Now I know a lot of this is very basic to many of you out there. But for me, it was a bit of a leap in faith. I even had some fun doing it.
Posted by cpa3485 at 3:10 AM