My annual exercise in sleep deprivation and my season lasting fix for baseball did not happen like I had planned it this year. My little scooter accident played a role in my not being able to participate like I usually do. 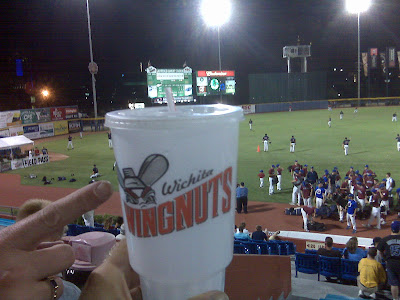 Wichita as I mentioned in a previous post has an interesting baseball history. We have had various minor league basebal teams here over the years. Our current team is known as the Wingnuts. They even had a contest to name that team and couldn't apparently come up with a better name. But I don't think the name is so bad.

Its fun to sit in the stands and yell "Go Nuts!"

We have a very old and somewhat storied ball park along the river downtown that was built as a WPA project in the 1930's. It has been refurbished and updated throughout the years and still could use some work, but it is not a bad park and is in some ways kind of fun. 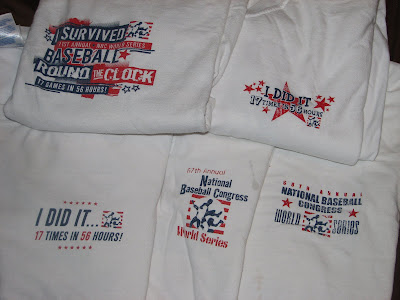 To me though, the really interesting summer saga at the ballpark occurs when the National Baseball Congress tournament is held. The tournament is generally held during the first couple of weeks in August. This year is the 75th anniversary of that event. It is a semi-pro tournament and the circumstances have changed over the years, but is a fun event comprising anywhere from 30 to 40 teams coming to Wichita every year to compete in a double elimination tournament.

This tournament is the culmination of summer league baseball from leagues and teams from all over the country.

When the tournament was first established, many companies, armed forces bases and other organizations had baseball teams and competed in leagues over the summer. Many companies hired people (ringers) that maybe had some major league experience and were at the tail end of their careers, but still wanted to play ball.

The winners of some of these leagues are then invited to Wichita to play in a national tournament at the end of their respective seasons to crown a national champion.

Today's teams consist primarily of college players that join a summer league team to hone their skills and gain experience. There are two of these leagues in Kansas and various smaller towns host the teams. Players live in people's homes for a few weeks as the teams play out their schedules. These little towns go all out for their teams during the hot summer and the baseball is fun to watch.

These aren't sometimes the most experienced players and you see some really interesting "bonehead" baseball along with some really great baseball as well.

There have been many famous major league ballplayers that have passed through Wichita in this tournament before they made it big. Major league scouts frequently attend the tournament and it is not unusual to see professional scouts in the stands with their pitching speed guns all pointed at the field as a prospect is pitching.

With 40 teams participating, double elimination and only 2 weeks for the tournament, you can realize that games are played literally around the clock sometimes. Some games occur early in the morning and others very late at night. 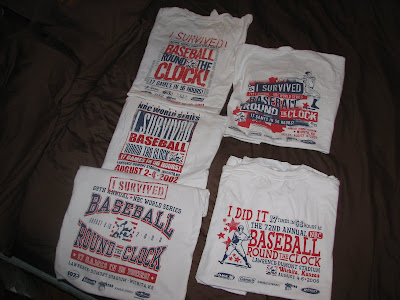 In an effort to keep some fans in the stands during these late night games, the promoters started a contest called "Baseball 'Round the Clock" (BBRC) . Fans that want to participate get to attend an entire weekend for a nominal admission charge and If they make it through the entire weekend, they win a T-shirt and other silly prizes commemorating their stupidity.

I myself have done this 5 times. Just one of many reasons that people say I have a loose screw somewhere. And I am really not a big baseball fan. But these players are here to play for the fun of the game. They don't get paid huge salaries, and they literally play for the love of the game. Because of that, I really enjoy this kind of baseball. It is not always beautifully played, but the effort is always there and you have to appreciate that. 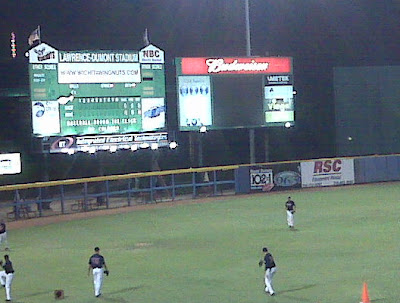 The best baseball game I ever saw was at this tournament. I have seen some bad baseball as well, but it certainly is fun.

The BBRC contest starts at 5:00 Friday evening and does not end until about midnight Sunday night.

Here's the catch. The BBRC participants have to check in some time during every game, but the check in time and location in the park is determined by the tournament officials. It might be anytime during the game. That keeps people from registering and not staying in the stands to watch the games. After all, part of the reason for doing this is to have some fans in the stands watching the games in the middle of the night. If they don't check in then they don't qualify to continue for the remainder of the weekend.

I know it sounds ridiculous. Sometimes the late night game might end at 4:00 am and you can get a chance to go home, take a shower, and catch a bit of sleep before you have to report back at 8:00 the next morning. Sometimes that does not even work and you get the pleasure of staying at the park all night long. 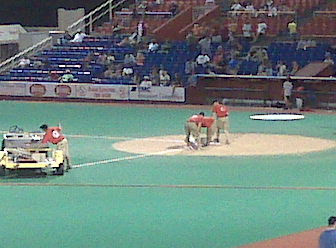 Sometimes the heat is unbearable in the middle of the day. There is of course little if any shade and If there is no breeze, well then you can imagine.

It can also be difficult to get any sleep, although many people try and you will see people with sleeping bags in the stands. The ballpark is a noisy place.

This year as a result of my injuries from my recent accident, it was not possible for me to try and do the BBRC for 2009. But that did not stop me from attending some of the games. 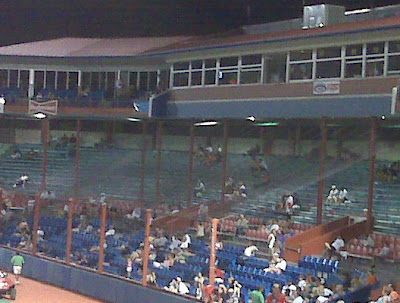 The Santa Barbara California Foresters were the winner of the tournament last year. We saw them play a team from Anchorage Alaska. The Foresters trailed most of the game but scored 3 runs in the bottom of the 7th inning to regain the lead and that lead held up to win the game.

The next game had the San Diego Stars vs the Seattle Studs. Great name for a team. Apparently a local lumber yard in Seattle once sponsored the team, hence the name. 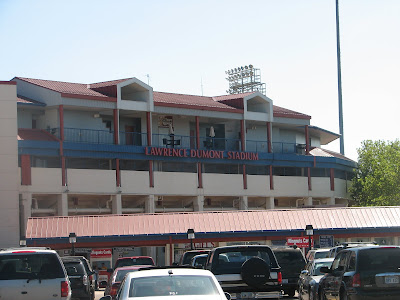 The final night of the tournament featured a classic display of hitting vs pitching.

Rain delayed the game twice during the evening, but eventually El Dorado won in the 11th inning by a score of 2-1. 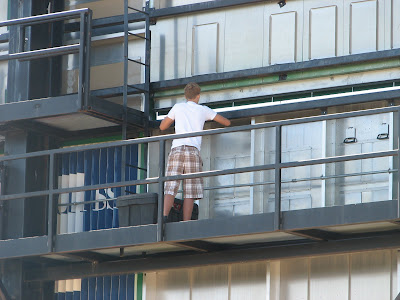 The ballpark features a manual scoreboard. I parked the scooter just outside of the left field fence and took this picture of the the "dude" in charge of placing numbers on the scoreboard from the back side. What a cool job that would be. 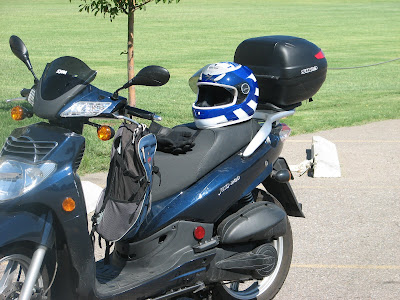 There is lots of places to park scooters at the ballpark. If you look closely enough you can see the scratches and the crack in the side of the scooter from the recent accident.
But how about that helmet!
Next year I am likely to try the BBRC again.
Sent from my BlackBerry® smartphone with SprintSpeed
Posted by cpa3485 at 8:20 AM