We were on a mission. A mission very personal to each of us. A quest for sites and scenes maybe forgotten in the past eras of 2 lane highway transportation. We had one particular place in mind and like postmen, neither rain, nor sleet, nor snow (or in this case, blazing heat), would keep us from our destination. When the interstate highway system was developed, many people lamented the fact that certain towns and routes were abandoned or rerouted in the never ending quest for people to travel longer distances and get there quicker and faster than they ever had before. Route 66 from Chicago to Los Angeles is an example. Many smaller towns lost regular business from travelers because the new interstate largely avoided smaller towns or at least the businesses along the highway that supported travelers. Our mission today was to maybe rediscover this piece of Americana. Then again, maybe we just wanted to ride. US 81 runs north and south and was once a heavily traveled highway, but now an interstate highway runs parallel to it taking cars and trucks much faster to their destinations than this old 2 lane highway ever could, even in its heyday. But the road is great for motorized 2 wheeled vehicles.
And our mission was to visit one of these old businesses that has existed on this highway for I don't know how many years. A business that has survived the fact that many years ago the interstate was built just a couple miles to the east so parts of this little town could be avoided in the interest of speed. 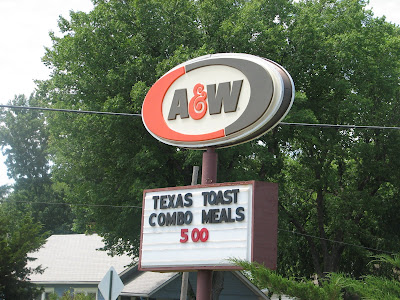 We are talking about the A&W Drive In located along old US 81 in Wellington, Kansas. I have fond and vivid childhood memories of getting large glass jugs of root beer and taking them home to drink on all week from the local A&W. Maybe the best root beer in the world. Maybe not, but I sure liked it.
This was the day of our monthly scooter rally for our newly formed scooter club. The plan had been put into place a month ago. Everyone had agreed that this was a great destination. The anticipation was rampant.
The fact that it was 100 degrees with a heat index approaching 110 didn't deter us.
I didn't even bother to see exactly what the temperature was that day. It didn't matter. It was freaking hot!
A few degrees difference didn't mean anything to us.
We were on a mission. We we're not going to be denied! 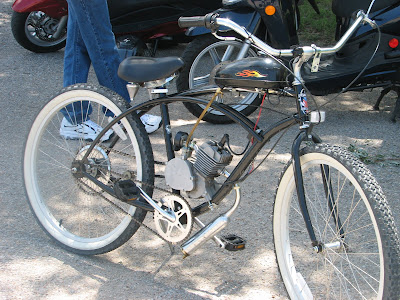 We met at the location of my scooter dealer. While we were gathering a guy on this vehicle rode by, saw all our scooters and stopped by to see what we were up to. Just had to take this picture. It was a Schwinn bicycle with some sort of 50cc engine installed on it. We invited him along on our trek, but he declined and rode off a few minutes later for places unknown. 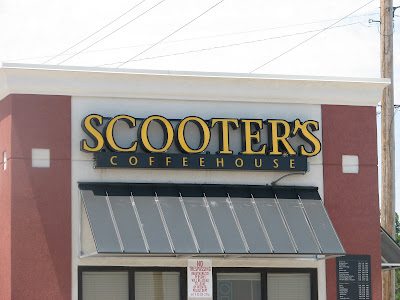 Before we headed out of town, we had to make a short stop. Someone thought it would be a good idea to take a group picture in front of Scooter's Coffeehouse. It was on our route (sort of), and it turned out to be a very fun idea. 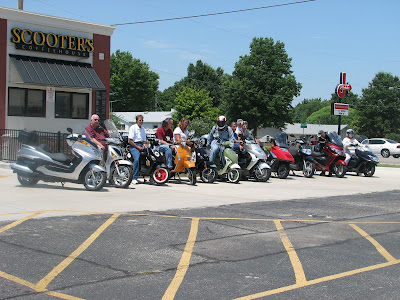 An employee of the store actually came out and took a few pictures of her own and said she was going to post them to Facebook or somewhere for the store. There is a link to their Facebook page somewhere on our club's website. 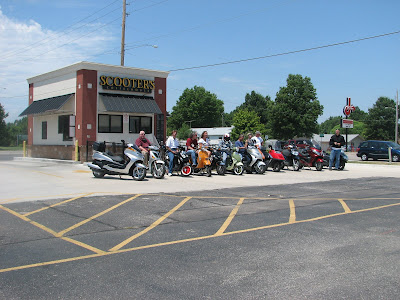 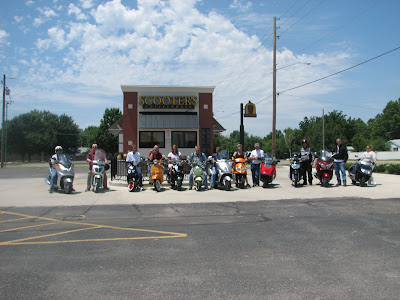 She also took some pictures with our cameras so we could all be in the photos. I am 3rd from the right all decked out in my mesh gear. Others were more lightly clothed for the day. It was very nice of her and they were very understanding because we were actually blocking their drive through lane with all of our scooters. 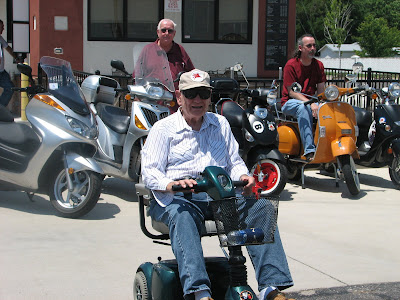 But then, this guy rode up. We just had to get him in the picture, too. He was just apparently tooling around the neighborhood. He was very nice and we had a great chat with him. He was curious about what we were doing. We invited him along on our quest (about a 30 mile trip).
He said, Sure!
But he went on to say that someone might have to tow him back to town because he thought he would have enough battery to get there, but not enough to get back!
Too Funny!!!
Anyway we eventually left Scooter's Coffeehouse and headed out of town. Our plan was to take some county roads at first and then eventually ride on old US 81 on into Wellington. We had to change the route a little bit because one road we were on turned into a gravel road unexpectedly. We backtracked a bit and got to the highway a little sooner than anticipated, but was still very enjoyable in spite of the temperature. 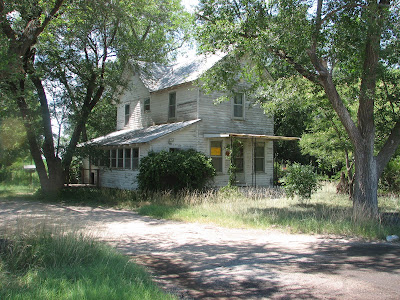 We stopped at one spot along the highway for a small break and to briefly discuss strategy and I took this picture of an old farmhouse. Soon though, we were back on our way with visions of root beer, ice cream, and other amenities (air conditioning) in mind. 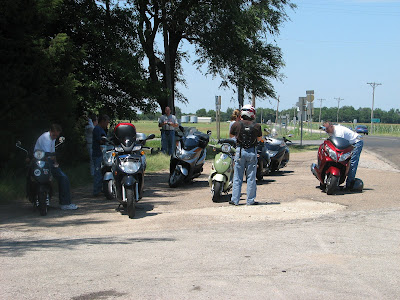 It's an interesting road. It was obvious that there had been many little businesses along the route that had not survived the completion of the interstate. At the same time though, the road was nice and many businesses seemed to be doing very well.
I even noticed a Gentlemen's Club along the way back and thought of my good friend Mr Riepe, knowing how much he might be interested. On a Sunday afternoon, however they appeared not to be open. 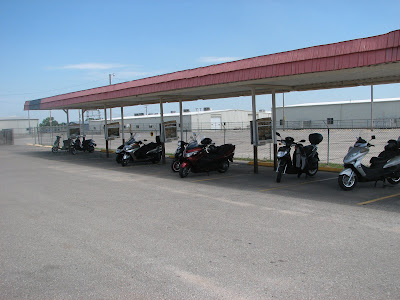 Eventually we rolled into Wellington and parked our scooters under the awnings so they could be in the shade. 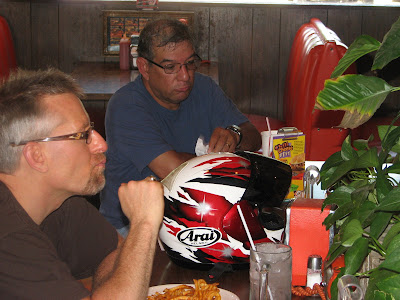 I got a good chuckle when we parked because at least 3 teenage female employees were eyeing us out of one of the windows as we pulled up and parked. Wondered what they might be thinking. After all we do not look like a real threatening sort of biker gang.
Or maybe we do! 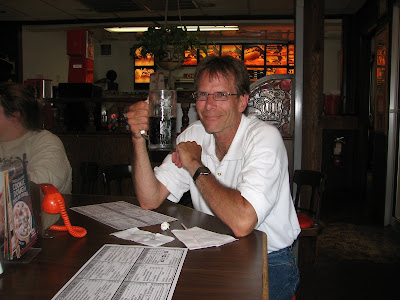 This place is fun because you make your order by using a telephone at each table to call your own order into the kitchen.
Now I have been to this A&W before. I had my heart set on a cold treat called a "Polar Freeze" being soft serve ice cream with chopped up Reeses Peanut Butter Cup mixed in. That is what I ordered and the service was outstanding. 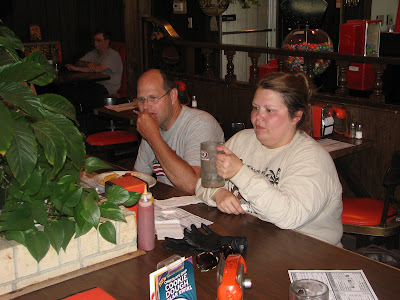 Others ordered onion rings and other items and I heard no complaints about any of the food. We ate and chatted for awhile and had a good time. The air conditioning was nice also. 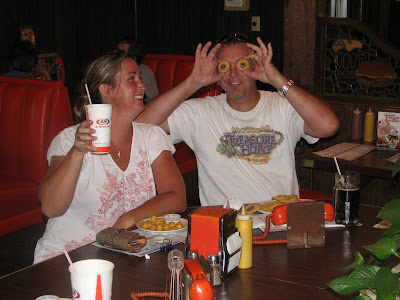 Eventually though it was time to get back on the road. It was mostly all business getting back to town. Maybe it was the heat, but it seemed like all of us were ready to get back home. There was no messing around on the way back and we all peeled for home.
A hot ride , but a very fun ride. 8 scooters completed the trek of roughly 80 miles.
Sent from my BlackBerry® smartphone with SprintSpeed
Posted by cpa3485 at 8:25 AM