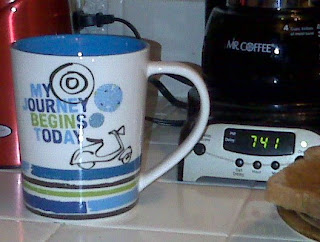 After some encouragement from some other bloggers, many of whom listed on my link list, a new journey starts for me today. I've started a blog! Not sure where this blog will be headed but I am looking forward to the adventure. I am learning this on the fly, so to speak, so forgive me if the postings seem a bit amateur. But that's the way it is. Actually, the start of this blog is a new journey for me, but the real journey started in July 2008 when I purchased my scooter. There were many reasons for the purchase, economics, fun, etc. But little did I know how much fun and excitement there would be. Since I bought the machine, I have commuted to and from work almost every day. I only missed a few days in the winter due to icy streets and have ridden in just about all weather conditions imaginable (even down to 10 degrees or so). 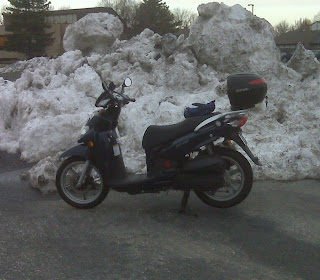 On this day, it was about 30 degrees, and some snowplows had cleared off a parking lot and piled all the snow and ice in a big pile. Silly me, I took a picture with my blackberry. Yes I had to be careful that day, but the streets were relatively clear. Riding in multiple weather conditions is a bit of a challenge, but with much experimenting, I have found many ways to survive. The weather here in Kansas varies a lot, blazing hot in summer, and some occasional snow in winter. I have also become an ATGATT advocate mainly because of the many very informative posts I have read on other blogs. On that day I took the ice picture, the ride to work was great, even exhilarating. In fact almost every day I ride to work is great and memorable in one way or another. This morning for instance, I passed by a bakery on the way to work. There was very little wind this morning, and the smell of the freshly baked goods permeated the intersection where I was stopped at a light. I would have never noticed the smells if I was in a car. Just one of the little things I enjoy about Scootin', and there is a veritable plethora (always liked that phrase) of little things about Scootin' that I enjoy. I have been thinking about starting a blog for some time, but have hesitated because I was afraid it would take too much time. But it has been a bit easier than I thought, and even though it will take some effort, I think the introspection involved will be good for me. I will try and make it interesting. I do not profess to be a good photographer, but would like to continue that hobby, and blogging will keep me going. I actually take a lot of photographs with my Blackberry which has a 2mp camera, and I have a pretty decent Canon digital camera as well. In fact, all the pictures on today's post, except for one were taken with the Blackberry. I live in Wichita. Some of my friends and myself used to jokingly refer to this city as "The Mistake on the Plains". It's actually not that bad at all. I have lived here for close to 30 years now. It's actually not a very old city, founded in 1870 or so. Other parts of Kansas are a few decades older, but the city is partially defined by the meeting of 2 rivers near the downtown area and was for many years before the city was founded a native american trading post. A relatively famous native american artist known as Blackbear Bosin designed a sculpture that is situated where the two rivers meet. Here's a link for more information. http://en.wikipedia.org/wiki/Blackbear_Bosin 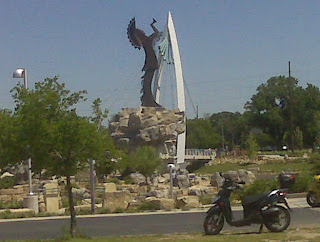 The 2 rivers that meet here are known as the Little and the Big Arkansas Rivers. Of course the Big Arkansas river starts in Colorado and ends up at the Mississippi. The smaller one is just sort of a tributary, but has always been known around here as the big and little rivers. One word of caution however: Do not pronounce the name of the river like you would the state of Arkansas (Arkansaw). In Kansas the river has the same pronunciation as the state of Kansas does. A sort of side note: With the help of some friends, we have recently started a little scooter club here in Wichita. Here's a recent picture:

Although we just getting this club off the ground, it looks like we are going to have lots of fun and hopefully safe miles together It is an interesting group of people, with scootering in common.

Since this is my first post and I am just barely learning how to do this, I'll keep this relatively short with a promise of more to come later. Please feel free to comment, make suggestions, and otherwise give me lots of help. I need it!